Back to Bundesliga business 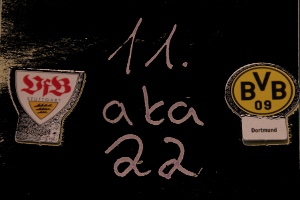 Being promoted to the third round of this season's DFB cup was a good start to the week. An easy 2-0 win at home against Dynamo Dresden will hopefully give our young guns some self-confidence for their pretty hard task in Stuttgart this weekend.

Our boys are surely on a run in Bundesliga. Having won 4 games in a row, with some spectacular performances, it is now time to show elegance in Swabia. VfB Stuttgart is on our way. As the teams in the upper half of the table are pretty close together – apart from Bayern Munich – this mathc can decide whether we stay on the second spot or drop down to the middle of nowhere.

Jürgen Klopp has many options

Apart from Owomoyela, who is missing due to a torn muscle fibre, Jürgen Klopp has the whole squad at hand. It will be interesting who will finally make the line-up. Up front Robert Lewandowski will start. Though Lucas Barrios is back from injury, the South-American striker will need some matches to really fit. On the other hand Robert Lwandoswki is red hot at the moment, so it would be silly to put him on the bench. In attacking midfield we will start with Götze, Kagawa and Großkreutz, while in holding midfield Bender and skipper Kehl should make it. That also means that Gündogan, signed from Nuremberg this season, won't start. In defence there are no news. Piczszek, Hummels, Subotic and Schmelzer are our flat four in front of goalie Roman Weidenfeller.