The little lights and lots of darks of a footballgame 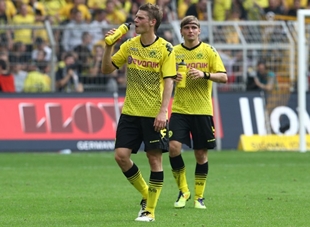 It wasn't much that was working in the game of our Borussia on the 10th of September. After 18 undefeated games at home in a row, the signs were pointing to change. We were a bit nervous because of Götzes suspension but then again we had faith that Kuba, who had played a great game for Poland during the week, would work his way through the game. Unfortunately on this day, not a lot came together. And as difficult as it is to admit it, our guest Hertha from Berlin actually deserved those three points more than we probably did.

The day couldn't have begun more perfectly than it actually did. The weather was amazing, a sunny and blue sky welcomed us on this late summer day and brought along a good mood that was spread all around the area of our Westfalenstadion. Our friends from England decided to join us on this day again and so we were all looking forward to a great game against the winner of last seasons 2. Bundesliga. Since Mario Götze was the only one we had to miss this Saturday, the earlier mentioned Kuba got a chance to prove himself from the beginning on on the right site. Hertha's coach Babbel on the other hand changed his formation on one position as well: Torun played for Lasogga.

It was a strange game from very early on. We definetely took over the dominant part on the pitch, Hertha stood deep and Dortmund pushed forward. However, sloppy passes were played more than usually and often in situations where there was no danger at all. 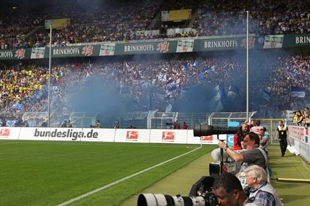 Hence Dortmund found no means to actually take advantage of that visual dominance and had to start over each time a ball was lost. Unfortunately this happened quite regularly so that no real flow of the play became possible. When the ball was actually in our posession, our players seemed to be lacking the ideas of what to do with it. Rather than pushing foward on the wings it was played to another player behind or next to the one having the ball, which lead to the ball getting lost this way quite frequently.

On the contrary, Hertha managed to switch from defense to offense quite well. Especially Ramos (who would later make quite a lot of new friends on the Südtribüne due to his timewasting) used all his speed in order to get ourdefense into trouble. And it worked. Ramos and Torun played a nice counterattack which Torun concluded by hitting the goalpost. Tough luck for Hertha. I whish I could find an explanation about why Dortmund had such difficulties to push through Hertha's defense. The only explanation I, however, have is, that our complete offense was not existing. Kagawa is only a shadow of what he used to be, Kuba proved once again why he is only taking a seat on the bench at the moment, and Großkreutz seemed to give Nationalcoach Löw only more reasons about why he shouldn't get invited. And Lewandowski? Well, what is the poor guy supposed to do if everyone else around him is basically not doing 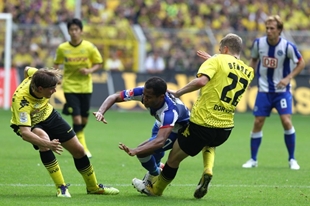 what he is supposed to do. Nothing worked. And then there are players like Hummels, usually quite sovereign, his failed passes on this day were amazing. And not necessarily in a positiv way. Dortmund tried, but everything that came out of it was first an alright shot onto the goal, then a weak header by Kagawa (22.), quite a nice freekick by Gündogan (28.) which Hertha's keeper Kraft saved and a header by Hummels only a minute later. Reaching Kraft's arms. Shortly before the break Lewandowski and Großkreutz gave it a go as well. But then again, the chances never really made you jump because one already felt that this would be hard work. 0:0 was the score of the first half. Time for a break.
I know I don't have many positives things to say about the first half of the game, but when there's dark and shadows, there is always some light as well. It was great to see that Marcel Schmelzer actually payed way better than he had in the past games. Still not as great as we remember him from last season, somehow still a bit scared, but he definetely didn't lose that many balls anymore. Another bright spot of the day: Manni Bender. He simply is the greatest hoover a team could ask for in front of the defense. It is amazing to watch him throwing himself into the duels as if there was no morning anymore. Most definetely one of the best players of the first half. The same goes for Piszczek, however in a different way. Piszczek exudes a security on the right side that is exactly what Dortmund needs. In the defense always there, in the offense always eager, sadly his partner in crime was missing today and so Piszczek couldn't take it to the limit as he usually does. But still, it is great to have him and we need to keep our fingers crossed that all works out well for him.

Another thing that one should mention is the quite good performance of referee Marco Fritz. After we have had enough reasons to complain about the past referees, it was nice to see that there are others as well. At times he acted a bit petty, but then again, it could have been worse. An absolute no go, however: who in the world found himself to be right to boo and hiss the team of the pitch during the halftime? Of course everyone was a unhappy about how the game had gone so far, but booing and hissing? Some people seriously need to reconsider their attitude and the reasons why they are in the stadium. If they are expection the Borussia Dortmund will march through the season again like last year, they should check if their naivity might actually be useful somewhere else. But most certainly not in our Westfalenstadium.

The second half began and the only optimism that was there was, that we tended to be better in the second half of the game so far. Jürgen Klopp decided to take Gündogan out during the halftime and gave da Silva the chance to continue. 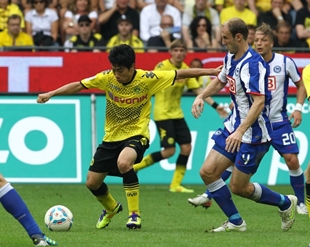 All of our hopes vanished quite quickly when Hertha's Raffael started to run in the middle of the pitch, all the way towards our goal. The approaching Hummels couldn't stop him which forced Schmelzer to start sprinting as well. Weidenfeller had already cleared the ball, unfortunately right in the moment when Schmelzer approached the penalty area. The ball fell against him and bounced back to Raffael who shot it into the goal.0-1 Hertha. Dortmund then tried to turn the game around but again, found no means at all to actually do so. Hertha was working very eager in their defense and Dortmund simply found no way through. No one came up with an idea that consisted of more than just passing the ball around or running straight into a 5 men defense. The outcome of that was another chance for Hertha. Again it was Raffael who, this time, hit the crossbar. Oh boy, oh boy. 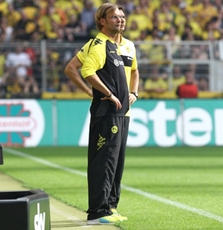 It took us until the 71. minute of the game until we were actually very close to jumping. This time the crossbar saved Hertha. A nice shot by Bender from 25 meters distance almost made us happy. Unfortunately only almost. Other than that the game went on the same way it had before. Dortmund found no way through and could consider themselves to be lucky. In the 78. minute of the game Raffael had again hit the goalpost and Weidenfeller saved us against Ebert only a couple of minutes later. But in the 81. minute it was all over. After a cornerkick Hertha's Mijatovic headed the ball onto the goal. Weidenfeller was able to save it at first but the ball landed straight in front of the feet of Niemeyer who managed to get it behind the goal line. 0-2 for Hertha. We actually did score on that day. In the 88. minute of the game, Lewandowski headed the ball into the goal after a nice free kick by da Silva. In the end, it was not enough.

I don't know what it is at the moment. Sure, Götze was missing, and Kuba was far away from being any help at all on the right side. 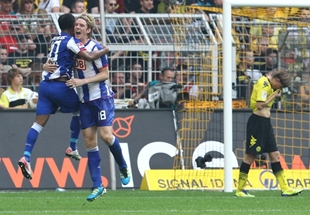 But on this day, it is difficult to not pick out a name and say that they played horribly today. Apparently our team is going through a phase where they need to find their way again. However that way looks. We are lacking the creativity and the ideas that used to make our game look so easy. I am certainly not happy about how things are at the moment. But then again, I have faith in this team. I know that they can do it. And on Tuesday is the next chance. Then, in the mighty Championsleague, something we have been looking forward to for so long.
Come on boys, make us happy, make YOURSELF happy on the Tuesday. It is the reward for all the effort you had put into the game last season. Go out there and show Arsenal why you belong into the Championsleague. And then next week, against Hannover, please do the same. We will be there to support you.