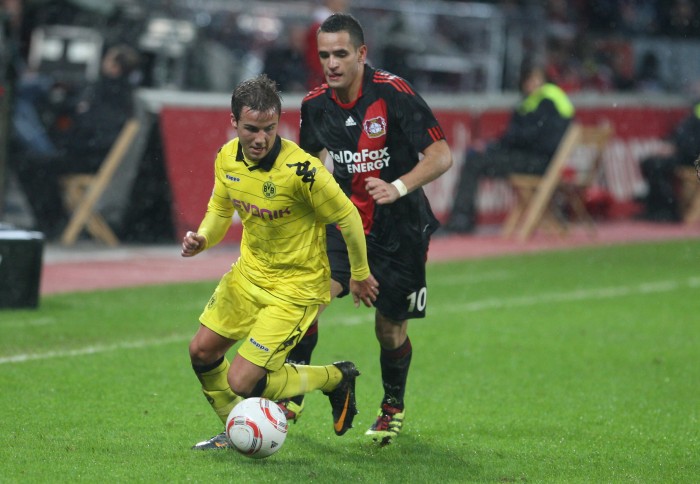 Maybe it is a bit harsh to reduce Bayer 04's team to their company history. Nonetheless in the aftermath of the Hoffenheim scandal the discussion about company-owned teams and clubs with a similar set-up is again firing up.

Of course Bayer 04 Leverkusen has a more than 100 year lasting tradition of sportive activities of their employees. It is in total surely not comparable to clubs like VfL Wolfsburg or TSG Hoffenheim, that are more or less controlled by a company or a single person, thwarting the idea, that every club should avoid external control. This is a year-long discussion, normally not heating up before a match in Leverkusen. Only the above mentioned Hoffenheim case of high frequency sounds used to stop chants of BVB supporters makes this a point, that is discussed heavily again.

Leverkusen had a really bad start into the season. Leading 3-0 in Dresden, they exited he first round of this season's DFB cup with an 4-3 in the end. Remarkable as Michael Ballack entered the pitch, when Leverkusen still led 3-0! And really.....Michael is the most mentioned topic, when talking about Leverkusen. The former skipper of the German national team doesn't get much time on the field and there is somehow trouble between him and Bayer 04 coach Robin Dutt. Also among the other players there is slight anger about how the new coach, who was signed from Freiburg, works with the team. The goal keeper was another point, that caused arousement. National goalie Rene Adler suffered an injury, that takes him out of business for several months. But instead of giving one of their talents the chance to proof themselves, they signed a 19-year old newcomer from VfB Stuttgart until winter...without any buy-out option! Really a way to say your own talents: „We don't trust you!" Really ridiculous! Besides that Barnetta is still missing due to injury.

Jürgen Klopp is still in doubt whether whizkid Kario Götze is ready for Saturday. The talented forward had some minor problems with his thigh. Sven Bender, who issed some trainings sessions, is also back. Apart from the still injured top striker Lucas Barrios and the right backs Owomoyela and Koch, Jürgen Klopp has all players available. Gündogan will most likely again take the place next to holding Sven Bender.