It was a kind of bizarre on the day of the championship celebration. On the great truck that piloted the team through the city and the celebrating masses, stood and sat Mohamed Zidan and sedulous waved the flag of Egypt.

Honestly it was the only moment of the season in which he could wave the flag and represent his home country in a positive way. On the pitch it did not work that way.. After his cruciate rupture from the end of the early season the second half of the year 2010 was already finished before it even started. But even after the rehabilitation the small man with the dribbling skills had to be content with short appearances on the pitch. Eight league matches with only 105 minutes of operating time – nothing that could satisfies a professional footballer. 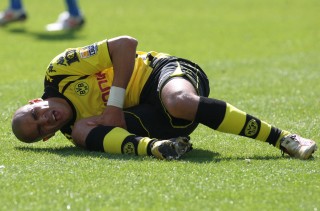 As if this was not enough: The only remarkable scene of Mohamed Zidan during the last season was during the match against FSV Mainz. Mohamed Zidan fought desperate and simultaneously unsuccessful to possess the ball while Neven Subotic lay on the ground and subsequently Mainz scored the 1-1 equalizer. Afterwards he was critized wrongly because he did not kick the ball outside of the pitch – he was not even in possession of the ball. Nevertheless this scene is emblematic for the season, which was such a successful one for Borussia, but a lost one for Mohamed Zidan.

And what about next season? In the actual 4-2-3-1 formation it will still be tough for Mohamed Zidan 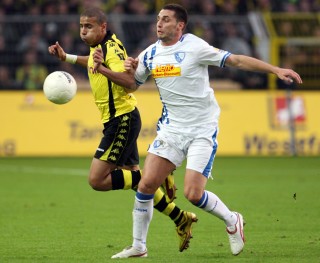 to become a regular starter. Lucas Barrios and Robert Lewandowski are certainly preferred for the only spearhead. Zidan cannot keep pace with both of them because of his physique. The only opportunity will be the position as secondary striker behind the spearhead which he already played in the season of 2009/2010. Right there Mario Götze and Shinji Kagawa crowed during the championship season. Hard to imagine that he will be able to overtake on of them if they will only keep their performances of last season. And to make matter worse the signing of Ivan Perisic does not simplify the situation.

It will be tough for Zidan, who loses his perspectives with BVB. It is not for nothing that the number 10 of Borussia already thought of possible transfers. Signs are pointing towards farewell, whether soon or next season cannot be told.

It seems like the team overtook Mohamed Zidan with its development similar to the case of Florian Kringe. In the beginning he was able to give a fresh impetus to the team or to create a moment of surprise with an individual action, it is nowadays no longer imaginable seeing him play within the actual team.

Nevertheless: Even with 105 minutes on the pitch during the championship season Mohamed Zidan stil belongs to the heroes in Black and Yellow.