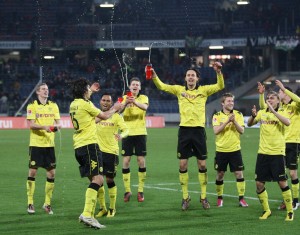 The headline above requires a lot of black humour referring tot the happenings on Thursday, the 31st march 2011: Close to the Westfalenstadion three packages containing chemicals and time fuses were found - possibly bombs! Up to now it's only known that the Bundeskriminalamt was in Dortmund and found those mentioned three packages close to the underground station „Stadion“ as well as another three possible bombs in the flat of a guy who was arrested by the police on Tuesday.

Terrorism in Dortmund? Terrorism in the most beatiful Stadium in the world? Islamism? Questions like this show up in a lot of people's minds, but the BKA stated that it is neither terrorism nor that this found has an islamistic background. The guy who planted the possible bombs planned to blackmail a company and so there is no need to fear about terrorism or anything.
Hans-Joachim Watzke said that there will be additional security measures in cooperation with the police in order to guarantee all fans a non-dangerous visit of the Holy Temple. 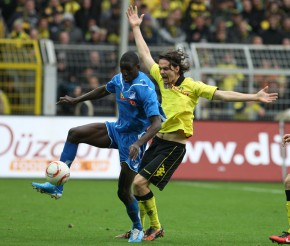 But back from the things we won't need to worry about to the things we might need to worry about- the hard match against a team that surprised the league nearly as much as Borussia did: Hannover 96! Just by taking a look at the Bundesliga table we can see that a very tough enemy will show up in Dortmund at 15:30 on Saturday - the 3rd place and even 2 points in front of Bayern Munich are obvious indications that the extraordinary match in Hannover on the 11th matchday won't be repeated easily (4:0 for Borussia).

According to bvb.de our young guns will be able to play with the best possible line-up, although Neven Subotic returned from the Serbian National Team with a flesh woundon on his foot. Another National Team injury is what Kuba is suffering from: a tight muscle in his thigh. Up to now both are expected to be in the starting formation.
On the other side Hannover's goalkeeper Zieler might be missing due to an injury on his shoulder so that Florian Fromlowitz might come back into the starting formation of Hannover. Besides Zieler 2 other players will be missing for sure: Avevor and Andreasen are both not fit again after injuries in the past. 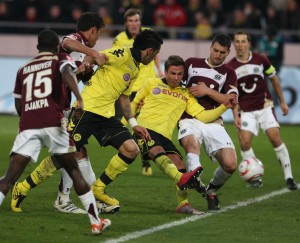 As I said before, the match against Hannover won't be too easy, especially the offense of Mirko Slomka's team is always dangerous and has one of the highest „efficiency rates“ (one goal out of eight shots) of the Bundesliga. On Thursday Jürgen Klopp let the team train offensive „routine“ in order to create more chances and shooting on goal, especially focussing on recieving the ball and the fast creation of opportunities afterwards.

So hopefully the team will be able to fulfil the expectations and make another huge step in order to win the Bundesliga!