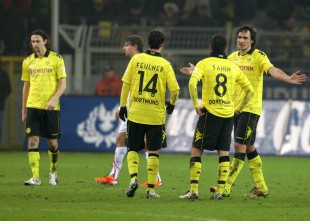 Borussia Dortmund shared points with VfB Stuttgart in their first home match this year. While the BVB squad was eagerly pressing and creating many chances, it were the Swabians who hit a late 1-1 equaliser, that left the black-yellow supporters stunning. Nonetheless, regarding the momentum on the pitch, it was a nice afternoon despite giving 2 points away to easily.

Borussia had to cope with Sven „Manni" Bender's injury. Surely a big hit as the young prospect had a brilliant season so far. Oldie Antonio da Silva took his position in holding midfeld. Shinji Kagawa is still with his national side on tour playing the Asian Cup. And by the way, the Nippon wizard took his team with two goals and an last minute assist to the semi final. So his story continues. Back to Borussia: Lucas Barrios was again taking place on the bench as he was still recovering from an infection. Long-term injured players like Owomoyela and Kehl were no option again.

Bruno Labbadia made one change and replaced injured striker Cacau by Schipplock. The young forward had his first starting line up appearance in Bundesliga.

In front of a sold-out Westfalenstadion both teams started a little bit unorganized. Pogrebnyak had an early approach in the first minute but his shot from 20 metres was blocked. Borussia lacked concentration at the beginning. Especially Antonio da Silva lost many balls, giving VfB Stuttgart some space. But it were our black-yellow heroes who nearly hit the first goal. Da Silva with one of his brigther moments finding Robert Lewandowski in the box. Unfortunately he didn't hit the ball well, so it was well wide. But the Swabians weren't only defending. After 15 minutes one of their several corner kicks gave Gentner the opportunity to place a header, but BVB goalie Roman Weidenfeller made a nice save on the goalline. Schipplock seemed to be inspired by Gentner and a header approach only 4 minutes later. 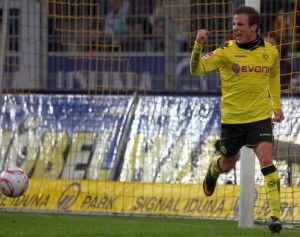 Borussia Dortmund was now more into the match and slowly took over command. A superb pressing by Götze and Lewandowski stole the ball from a Stuttgart defender. Kuba was up and away direction VfB goalie, but the Polish winger nearly tumbled and so the ball was lost to Ulreich. And only 120 seconds later in minute 31 Borussia was again going for the lead. Götze played to Sahin on the left side. The Turkish playmaker tried a horizontal pass to Lewandowski, who was waiting in front of the goalie. As a VfB defender cleared, the chance was gone. Maybe Sahin should have taken the shot by himself. And as BVB was raising the pressure, 2 minutes from halftime they finally scored. Central defender Mats Hummels played to Sahin again. Nuri Sahin played a short pass from the left side into the box, where stellar talent Mario Götze paced through defence. The hot prospect needed only two contacts to convert – 1-0 Borussia Dortmund! And with a little bit more luck BVB could have doubled the lead as a header by Lewandowski in minute 45 was cleared by Ulreich.

Borussia Dortmund continued where they ended the first half. Nonetheless VfB Stuttgart had nice attacks every now and then. It was somehow clearly visible that Sven Bender is vital to this team. His defensive midfield qualities are supreme. The next arouser occurred in minute 50 when Mario Götze entered the box and was tackled by VfB defender Tasci. The Stuttgart player surely didn't hit the ball and some referees would have pointed to the spot, but at all it wasn't a crystal clear penalty. Großkreutz had another approach only 60 seconds later but his header was a little bit to high. In minute 57 Dortmund had by far the biggest chance of the match. Sahin played a fantastic vertical pass to Götze, who entered the box from the right side. Instead of trying to score from narrow angle, he saw Lewandowski ummarked in front of the goal. But the Polish national striker missed the empty goal from 7 metres only – incredible! This was maybe Dortmund's best period. In minute 60 a deflected shot by Nuri Sahin left Ulreich stunning, but the ball was half a meter wide. On the other side Stuttgart had also some counter-attacks that often lacked precision in the final. Back to Stuttgart's box Großkreutz had a fine opportunity but failed to fire a powerful shot. Substitute Barrios had his first highlight in minute 75 when his right-footed rocket was denied by a fantastic Ulreich save. And as Dortmund wasted so many chances, Stuttgart's counter-attacks finally paid off. In minute 84, substitute Gebhart played a low pass to the right side where Kuzmanovic touched the ball with his heel and so gave Pogrebnyak the chance to score. The Russian striker fired a powerful shot into the right upper corner, leaving Weidenfeller no chance to save – 1-1! Borussia Dortmund tried to come back but had only a Barrios header to offer, but it was cleared by Ulreich in the end. 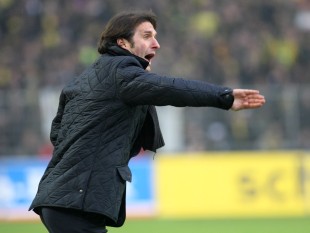 Regarding table positions and the way the match went, 1 point is definitely not enough. We had enough chances to score at least 2 or 3 goals. Surely VfB Stuttgart earned their late goal as fought hard really, but we were clearly the better team. So it was a disappointing result, though a nice performance. But it doesn't matter, we have to walk on and beat Wolfsburg away next weekend. Easy as that.

Jürgen Klopp: "We had many bright moments, that should have served us 3 points. But we wasted those moments. A second goal would have decided this match. In the end we didn't defend like we should have."

Bruno Labbadia: "I am happy with this point, that we really earned, because we invested so much. But we had also a little bit luck, that you need against a top team that Borussia Dortmund is."