Borussia welcomes VFL Wolfsburg ? much more than the penultimate matchday! 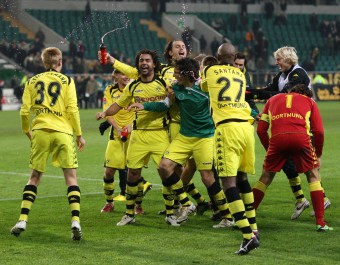 After Borussia’s win in Nuremberg and Hamburg’s defeat in Hoffenheim the doors to Europe are wide open for us! The only question is: Will we take the “Europa league Road” for which we have been qualified last week or will we even take the “Champions league Boulevard”?

On Saturday afternoon we will welcome current champion VFL Wolfsburg in our Westfalenstadion. No surprise - Germany’s one and only football temple will be sold out for our last home match this season! And there’s one big thing we all have in mind: Position 3 (= qualification match for Champions League!) is possible for our BVB, provided that we will win our last two matches and Bremen and also Leverkusen will lose points in the remaining two matches. In the end, on matchday # 34, it’s necessary for Borussia to gain two points more than Bremen and Leverkusen. Both are one point in front of us and have a better goal difference. But also other options are possible. If Borussia will reach a position from 4th to 6th spot it’s almost science to explain the regulations for participation in the Europa league. To understand the system of qualification stages with different rounds I can highly recommend Steph’s report “Europe – and now?” from this week. But before we use the pocket calculator to check what’s in store for Borussia let’s take a look at our next match against Wolfsburg!

Last season, Wolfsburg was without a doubt the total surprise in the league. At the end of the first leg, the team was in position 9, then the club climbed higher and higher and in the end Wolfsburg won the Championship. Responsible for this overnight success was without a doubt former coach Felix Magath. Magath left the club after winning the title and is now coach for a suburbian team of Gelsenkirchen in terrible blue shirts. After Magath’s departure Wolfsburg couldn’t continue its success story. Magath’s successor Armin Veh was fired and now interims coach Lorenz Günther Köstner is responsible until the end of this season. Wolfsburg dropped out of the Europa league against FC Fulham three weeks ago and has currently at position 8 no chance to qualify for Europe this season. It seems that only striker Edin Dzeko meets the expectations of Wolfsburg’s fans this year. With 20 goals he is currently second best in the league behind Stefan Kießling from Leverkusen (21 goals) and 2 goals in front of “La pantera” Lucas barrios. Dzeko stopped training during this week due to problems with his hip but presumably he will join the green (turned blue - find out below) on Saturday, as well as midfielder Zvjezdan Misimovic with temporary muscular problems. 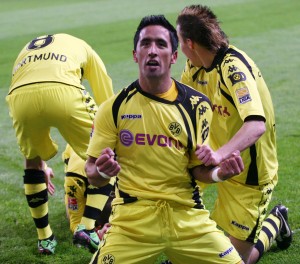 For Borussia, Sven Bender joined our club of injured players. He suffered a muscle strain in Borussia’s match last Saturday in Nuremberg. So for Sven this season is over. The same probably for our skipper Sebastian Kehl. Sebastian will definitely not see the pitch on Saturday and it’s doubtful if he will return for our last match next Saturday in Freiburg. Probably Nelson Valdez will replace Mohamed Zidan again. Mohamed’s ligament damage from our match against Hoffenheim has been operated last week. All the best wishes for your comeback in approximately six months!

Two further facts regarding our final home match are worth to mention: In total 1.3 million fans visited Borussia’s home games this season. That means an average attendance of 77.300, the highest since the 2004/2005 season! And also important: Against Wolfsburg our team will wear their new jerseys for season 2010/2011 for the first time. A nice yellow shirt (what else?) designed with thin horizontal stripes in black. An extreme contrast to Wolfsburg’s blue jerseys especially designed by main sponsor Volkswagen for the club’s last two away matches. And with regard to the terrible colour blue: Much depends on the results in other stadiums if Borussia finally will achieve position 3, 4, 5 or 6 at the end of the season: Bayer Leverkusen welcomes relegation team Hertha BSC and Werder Bremen has to travel to the terrible blue club in Gelsenkirchen. 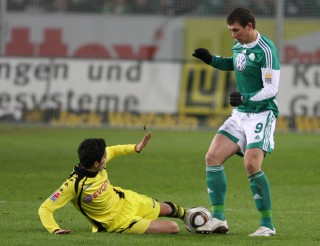 But we don’t have any influence on the results in other stadiums! First we have to beat Wolfsburg and after that let’s see what’s happening to our competitors on the way to Europe! Therefore our target will be the 3rd spot as long as it will be possible! Come on Borussia - the Champions League is waiting for black’n yellow!