Try to force the deciding match 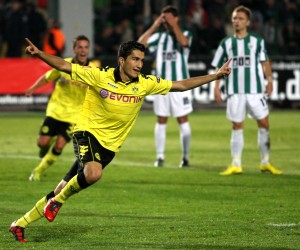 Anyway, it is pointless to regret bygone times and opportunities. Let us have a look on the present situation in the Europa-League and the minimal chance of insisting the group stage. FC Sevilla is currently in front of the group with nine points out of four matches. Paris Saint-Germain gained eight points yet. Borussia is ranked on the 3rd place with five points. Lwiw is lagging far behind with zero points and is already eliminated.
There exist two scenarios in which Borussia could take it's chance and reach the next round. In general it is necessary to win the remaining two matches against Lwiw and Sevilla. The two possibilities are the following: Firstly the duel of Paris and Sevillas has to end in a draw or even better Paris decides the match for itself. In this case Borussia would have a decider in Spain! Secondly Paris has to lose the two remaining matches against Sevilla and Lwiw. But to be honest, the second scenario is very doubtful. It seems that we have to hope for a support by the French. 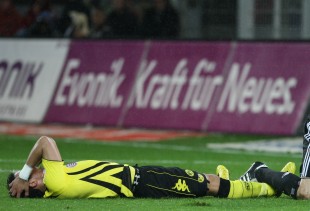 After the view on the current situation of the Europa-League group, I will give a short overview of the latest results of Lwiw, Sevilla and Paris in their national leagues. Our next opponent Lwiw won its last match against Sorja Luhansk with 4-2. The team is ranked on the 5th place of the Ukraine league. It seems that they are heading towards Europa-League again. Paris carved out a 2-2 draw against Olympique Lyon last weekend. The French are currently on the 4th rank of the Ligue 1 with a deficit of only one point to the top. It gives hope that the team of Sevilla is in a bad shape this year, they lost their last match against Getafe with 1-3 and are ranked on position eight of the table.

But now the focus on the next task on Thursday evening. One import Borussian who had a large share of the win in the Ukraine will not be playing tomorrow. As we already reported Lucas Barrios is going to miss, at least until next week. As if this was not enough, Kagawa and Kuba were also not able to visit the training on Tuesday. About the miss of Barrios coach Jürgen Klopp said: „It would be a problem if we didn't have Lewandowski. He deserves the chance that results out of the injury of Lucas. Robert is an excellent option that I'm really happy about.“ Asked about a possible knock out in the Europa-League, Klopp said: „We don't notice this match as a decider, but as an opportunity to stay in this competition.“ Towards the opinion of some people, that an elimination of Borussia would be an advantage for the Bundesliga Klopp answered: „We think totally different and are really stubborn in our own opinion and want to use every little chance to stay in this competiton – and start with it tomorrow evening.“ Nevertheless Borussia Dortmund will face his opponent with the „greatest respect“. Lwiw gained this respect during the match in the Ukraine. „They will fight with tooth and nail to collect their first three points.“ 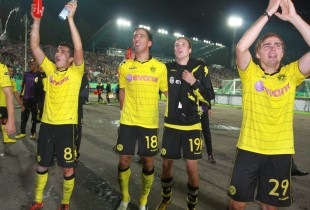 We all know that Lviv is able and willing to win this football match. Remember their performance of the last match. Hopefully our youngsters will be victoriously again. We want the decider!