Behind the curtains: Borussia, a club on the turndown 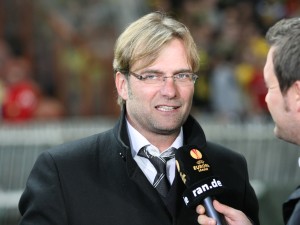 Things are not easy in Dortmund right now. Borussia is a team on the turndown. After yesterday's dreadful match against Hannover 96, Arnd Zeigler***, a German sportscaster and Werder Bremen stadium announcer, got hold of Jürgen Klopp, the out of luck Borussia Dortmund coach, and asked him about the current situation in Dortmund. The interview was shown on "Zeiglers wunderbare Welt des Fußballs" on WDR TV late on Sunday night. It is one of the most disclosing interviews ever to be shown on German TV. Schwatzgelb.com presents you with the English transcript and a few annotations, so that you get the impression about what really is going behind the super shiny top of the world atmosphere they make us want to believe.

Arnd Zeigler: By popular request, above all by our viewers from the Gelsenkirchen area, on this show we will challenge Borussia Dortmund. We do that as the only show on German TV. I have Jürgen Klopp, the coach, here. Jürgen, after 11 matches Borussia Dortmund is at eye level with the likes of Mainz and Frankfurt. This cannot be the demanding attitude of a club like Borussia Dortmund.

Jürgen Klopp: His fingers nervously play with his glasses, Klopp has a wrathful face. Yes, what can I say? We have problems, problems, problems with the team which just does not follow our standards. It is tough to just get through to the team. Frankly: I am not sure, if I am stillt he right person here. We will question it this week, but ok, I also have to admit that Mainz and Frankfurt do not play a superseason but they do a solid job. Thus it is not that unusual that they come too close to us.

AZ: On paper it looks like a smooth win today, but Borussia at times looked like an away team today. The coach will not be too happy about it?

JK: No way. Hence I got really loud during half time, because we have other aims than to perform this way and thus it was only bad today. We can be happy and count our blessings that we managed to win the match, but we better today than tomorrow have to change a lot of things, and yes, it has to go on somehow. We only have those players and there is no way we can change it. We have no money to buy new players. I am not sure at all. I am all at sea, but I… We will drive home now and eventually we come up with something. 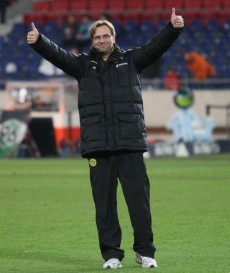 AZ: If you look at the match today. A goalie, who is way above 29 years of age. The average age is part of the problem. Can a top team take the liberty to field such a team?

JK: Today Roman in fact did well, I believe. But if you see him in the morning, right after he got up, it is just a pathetic sight. Appalling. But again I have to add: We have no chance to change it! We have to drag him along, and yes, we mirror him closely. How long can it go on like this? But I don’t have any alternativates, i can’t put an outfield player between the posts. He is the only one we have and thus we from time to time have to put on our beer goggles.

AZ: After the 4-0 he jubilantly left his goal – and his goal alone. This will not sit well with the coach. Has the team turned against the coach already?

JK: Possible, possible. As I have said: I need to re-watch the match. Right now, frankly, I don’t have any words for our situation. It was disillusioning today, but well…

AZ: Yes, and one more inquiry about your role. A player like Lothar Sippel*, who has scored so many important goals, today again was left out of the squad. It can not only be sporting issues. Is it something interpersonal? 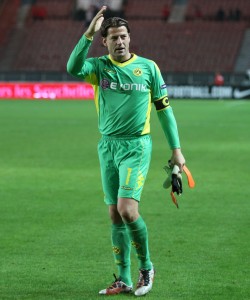 JK: Yes, I have known Lothar for a long long time now. Back in the days we would play in the Hessenauswahl**. Or: He would play as a forward, alongside Dieter Hecking, and I would sit on the bench. I always knew, whenever he would be my player, that I’d pay him back and that is what I do from week to week now.

AZ: Ok, many thanks. Despite everything: A safe trip home

AZ: The aforementioned Lothar Sippel, like no other, signifies the crisis of the current leader of the Bundesliga. The club in black and yellow, the club crumbles

Cut – Zeigler and Sippel. Sippel wears a white fur collared winter coat and a silk scarf, blond slicked-back hair. He does not look too happy at all. The caption reads: Lothar Sippel - benchwarmer

AZ: You have been left out of the squad again. Are there any sporting reasons for that?

AZ: Has the coach discussed it with you?

AZ: Do you have any hope to feature as a forward for Borussia in the future?

LS: thinks for a while No

AZ: The cloth between Jürgen Klopp and Lothar Sippel is cut. This is also a question we need to follow up on.

* Hessenauswahl - The state XI for the state Hessen. Jürgen Klopp, Dieter Hecking, the coach of Nürnberg and Lothar Sippel all played in that squad during their youth days

** Lothar Sippel - born in 1965, changed in 1992 from Eintracht Frankfurt to Borussia Dortmund. Although Lothar scored 14 goals for Frankfurt in 1991/92 he couldn’t achieve the status of a regular player in Dortmund. In total he made 39 Bundesliga matches (5 goals) for Borussia in two seasons from 1992-1994. Surely one of his most important goals for Borussia was a fantastic header against AS Rome (2:0) in UEFA Cup 1993. He was also a member of BVB’s team in the final matches (1:3 and 0:3) against Juventus Turin.

Maybe in other clubs Lothar Sippel would have spent a more successful career but for coach Ottmar Hitzfeld our Swiss goalgetter Stephane Chapuisat was striker “number one” in Borussia’s team. After his two years in Dortmund, Sippel played for Hannover and Unterhaching in Germany’s second division. Later he worked as a coach for some clubs in lower divisions in the area around Hannover. In 2006 he became assistant of former BVB coach Horst Köppel in United Arab Emirates but both were fired after only three months. Today Lothar Sippel is owner of an event agency in Burgwedel, near Hannover. From time to time he still puts on his black yellow jersey for charity matches in Borussia’s all star team.

*** Arnd Zeigler - His weekly show is one of the most entertaining shows on the Bundesliga. It is shown on WDR TV at 11.45pm every Sunday. Zeigler and Klopp have already entertained us in the past, but this interview is the highlight of their partnership so far.