Do or die in Paris 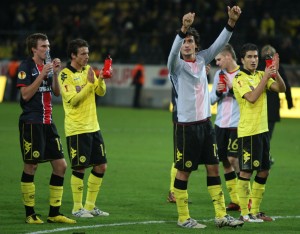 Match Day 4 in Europe. Borussia have already left the group stages and now face three do-or-die matches in a row. With only four points after three matches the Black’n’Yellows trail Sevilla by two and today’s opponent Paris by three points. The Ukrainian side Karpaty Lviv have yet to grab a point in Europa League Group J.

They promised us Europe and we got the Europa League in return. After finally having qualified for Europe after drought-stricken years, Borussia fans have been disappointed with the way it turned out. We remembered the great nights against United and Celtic but had forgotten all about the grey days that have also not been unknown during the 90s and early noughties. The first match in Lviv turned out to be a thriller. A game we turned around in the dying seconds with two great goals by Barrios and Götze, looking back we forgot how bad Lviv really were and that only major mistakes in defense let Lviv back into the game. The next tie against Sevilla saw us being the better but unlucky side in front of some 50.000 fans, we lost the match and Schmelzer because of a weird second booking. This paved the way for the return of BVB legend Dede, who did a solid job but could not stop the late Paris equalizer. Whereas only a couple of Sevilla fans showed up, Paris brought a lot of fans. But those fans left a bad taste in our mouth. Four groups fighting each other, not caring about what happens on the pitch but what happens in the other stands. Some BVB supporter groups insisted on taking sides, there banners where greeted with bangers by one of the four supporter groups. A weird scenario, a weird night. 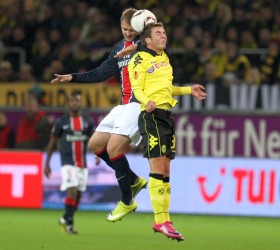 Still this late equalizer now puts Dortmund under pressure in Paris. “It is a very important match for us. We have played good football so far, but only have managed to win four points. If we beat Paris tonight, we are equal on points but have an advantage with winning the head-to-head record”, says coach Jürgen Klopp and adds with a wink: “For six years now we have not lost nor drew an away match in Europe. We want to extend that record”. Midfield star Nuri Sahin however has done his maths and comes to the solution: “We have to get at least six points from the last three games, otherwise we are out of it”. And even those six points might not be enough depending on the other results in Group J. The common line of communication from the club today is that Borussia “is looking for a result that keeps us in the competition”, as Sports Director Michael Zorc puts it.

The Bundesliga leaders have travelled to Paris with 19 players, one of them will not be on the bench tonight. Polish midfielder Kuba being the 19th player, after coming back from a groin injury. He trained with the team for the first time yesterday evening. This leaves Klopp to choose from Kuba, Großkreutz, starlet Götze, Kagawa and Lewandowski for three midfield positions. The double six (which against Mainz was extended to a triple six with Großkreutz) will again be Sven “The Offender” Bender and Nuri Sahin. Up front we will see Super Lucas looking for his second goal in Europa League and the back four will remain unchanged from Sunday’s win against Mainz. 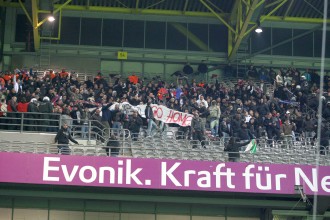 Paris St. Germain have conceded four goals after the Dortmund game a fortnight ago. Keeper Edel had kept a clean sheet before the Nuri Sahin for quite a few games but now the team from the French capital seems to be struggling in their domestic league. They have lost 2-3 against Auxerre and only drew 1-1 against Montpellier over the weekend. They also have the big match against Olympiue Marseille coming up on the weekend, so their focus might just be a bit blurred. Blurred enough to travel to Paris and take that three points home. Paris however have won their last four home games against German opposition and are unbeaten in 11 home games in Europe, a run stretching back to November 2006. One of the streaks will end tonight, it shall be the Paris streak.