First cup of the season 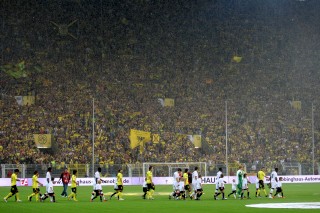 On Wednesday evening, Borussia Dortmund gained the first out of four cups of the upcoming season. After a devastating 3-1 (1-1) victory over Manchester City, Borussia is from now on referred to as Ferrostaal Cup winner 2010. After 8 long years without any championships, this is a great accomplishment for our young team and pure motivation for the challenges in German Cup, League and Europa League which will be dominated by the new favorite, Ballspielverein Borussia Dortmund 1909 e.V. Ok, let's get serious...

Of course, probably none of our players will give anything about that Ferrostaal thing, but a victory against City, who came without star players like Carlos Tevez or David Silva, but still had an impressive line-up with two Toures, Shaun Wright-Phillips, Steven Ireland or Roque Santa Cruz, doesn't have to be spoken down. And even though the first half of the friendly was not as good as expected and City all in all disappointed many of the viewers, our team presented himself ready for the new season and most importantly, ready for Europe since City finished on rank five last season in the English Premier League. 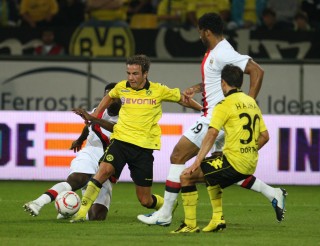 With Dortmund's own Kevin Großkreutz being out for the match with a minor injury, youngster Mario Götze got the chance to show what he's capable of... and impressed with the will to run and some nice actions. Kloppo sent the best possible formation on the field, with Weidenfeller being the number one, Schmelzer, Subotic, Hummels and Owomoyela as defense, Sahin and skipper Kehl in defensive midfield, Götze and Kuba on the sides, Kagawa as some kind of playmaker and Barrios as the sole forward. And it was Lucas who brought the quick lead in minute nine, after Kolo Toure had problems with Tsubasa Ozora, I mean with Shinji Kagawa and only stopped him at the cost of a penalty. Barrios was willing to perform the penalty instead of our last season's man for the penalty, Nuri Sahin, and Lucas convinced with a nice shot to the left and the 1-0. At the end of the half, however, the left side was not the best choice since Barrios was beaten by Manchester's goalkeeper Hart when he tried to shoot the second penalty which came up after a foul against Owomoyela exactly like the first one. In the meantime, City equalized shortly after the 1-0 by Jo.

In half two, Dortmund improved his gameplay and City only focused on the defense work. With really well-playing Götze and Kagawa, Dortmund pushed forward so it was only logical to gain the lead again which was realized by Tsu... Shinji Kagawa to underline his great impression after Götze got his first assist of the evening. His second one in minute 81 was for Robert Lewandowski who was brought in at the beginning of the second half and had no problem to hit the open goal to score the 3-1. All in all, it was a pretty good game, especially of our team which gives hope for the upcoming challenges with Burghausen in German Cup and our opponent hard to pronounce and to write in Europa League. If our squad presents itself that well in the first three or four big matches of this season, we have nothing to be afraid of. 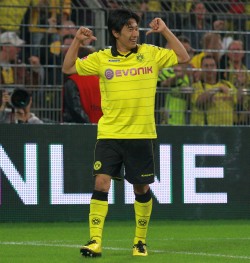 As far as the atmosphere in the Westfalenstadion goes, you really noticed that it was only a friendly. 31.000 fans found their way back to our temple but really temper did not come up very often. Sadly, the loudest chants of the night were the famous "Scheisse 04"-chants who are nothing but stupid if you play Manchester City at a friendly and the hated blue-white neighbour has nothing to do with it. We are a couple of weeks away from the derby on day four of the season, so we have plenty time to sing those chants during the derby-week, but until then, they have no reason to be in our stadium. Nearly the same thing goes for the people who booed our team when they were not willing to sit down and celebrate after a victory in a friendly game. Do you show your passion and love that way? Booing your team after a match which was about nothing? Really disappointing from my point of view. However, it was great to be back in Westfalenstadion and to see our team after the long off-season. So let's look forward to the beginning of the season and to our up-coming three championships which will be placed in the showcase right beside the traditional and important, but really ugly Ferrostaal Cup.

I watched the game together with Jake from California on the Südtribüne and he will describe his impressions of his first visit in the heart of the temple here soon.