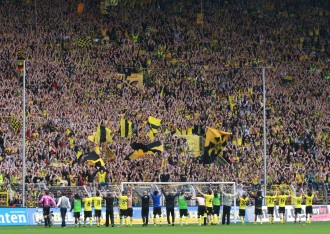 Now that the world cup distraction is over, the anticipation towards season 2010/2011 and our return to international football is on the rise. But we still want to take a look back on the individual performances of BVB players throughout the jubilee season 09/10. We already presented you our view on the goalies so this time around we´re taking a closer look on Borussia´s defenders. Each player from the backbone of our team gets judged by three of our editors (of the German page, too), in this edition we focus on the centre backs, next time the fullbacks will get their share. As before, our grades rank from 1 (spot on mate, brilliant) to 6 (that was crap, go away).

Web: You can´t really judge his performance in the Bundesliga, as he had only one minute on the pitch. But nonetheless the skipper of our reserve was a vital part of the 1st team´s squad. Jürgen Klopp knew that he could rely 100% on him in case he was needed. Next season this will no longer be the case as Uwe´s solid performances in League 3 caught the eye of other teams Finally Hünemeier followed his former BVB colleagues to Energie Cottbus. At 24 years, time for change might have come come for Uwe, if he really wants to make the starting line-up of a professional team. In our relegated reserve team Hünemeier was an undisputed leader and kept things together as well as he could in defence in his calm, low-key way. So for our reserve it hurts to see the skipper abandon the ship, but Hünemeier is simply too strong for 4th League football. So no mark for his Bundesliga performance, but he deserves a good 3+ for his efforts in the reserve. Good Luck in the Lausitz Uwe, hopefully we´ll see you again in the mighty Westfalenstadion. 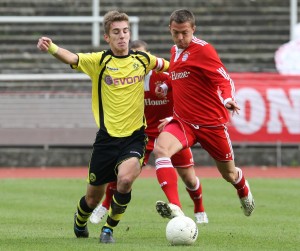 Sven: He played only one minute with the pros, but mainly kept the bench warm. So he missed a lot of the reserve matches. There he was a cornerstone of the team. He always kept his calm and used his head not only for thinking. In the first half of the season he put some headers in the net. But he is just too strong for League 4 and with Hummels, Subotic and Santana there seems no room for him in Jürgen Klopp´s team. So he will leave the club. He deserves to play Bundesliga 2 next season. Mark 2
Tommy: Uwe Hünemeier was once again one of the best at BVB this season. Regrettably only at BVB II where the skip showed top performances, when he did not have to sit on the bench of the pros. The central defence around Uwe Hünemeier was definitely not the cause of our reserve´s relegation to Regionalliga West. Hünemeier´s main strengths are his smart positional play in defence and being a threat to the goal in offence especially after set pieces. Even if BVB II was behind, it was the skipper who motivated his team-mates and pushed them forward. But he could not get past Hummels, Subotic and Santana, so he had only a couple of Bundesliga minutes. This situation was not about to change next season and Regionalliga West would be no challenge for Uwe, so it was no big surprise when Hünemeier joined F.C. Energie. After 10 years in black ´n´yellow at BVB this is a real pity but when you look at it professionally it is absolutely understandble. 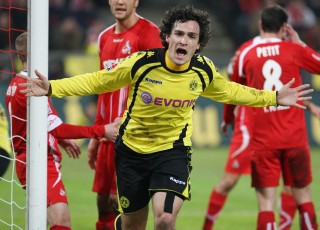 Sven: Quietly, without big words Mats Hummels has become a real darling of the BVB fans. A real bullseye transfer. Last season he proved once again, what big asset he is for BVB. Expertedly and routined the 21-year old dives after almost every ball. Unforgotten the scene after the winter break, when he cleared a ball on the line and denied a goal that seemed already secured. His reliable game is striking. He will rather clear the ball beyond the touchline than risk playing a misdirected pass in build-up. And eventually his name will even appear on the score board. Greetings to Joachim Löw, thank you F.C. Bayern. That´s a 2+ with a star.
Vanni: Maybe the best defensive player of last season. That we got the man for less than €5m turned out to be a bargain, and when even spectators from roundabout Herne admit, that Hummels should have been a definite pick for the World Cup, the lad can´t be too bad. He was the most reliable and consistent in our rows, and is remarkably mellow in defence for his age, always a threat in offence too with foot and head and generally always ready to bring 100%. Additionally he seems a nice and down-to-earth guy. No wonder he is that popular. Great season, Mats, carry on and even the Jogi won´t be able to ignore you any further. Mark 2
Christoph: Mats Hummels was one of the leading players in Dortmund´s defence last season even though his performances varied. Though he could not really impress in the first few games playing defensive midfield, he found a place in central defence after the 8th match-day where he is at the best of his game. With 5 goals he is among Borussia´s leading scorers. He often builds up the game from defence smartly and swiftly. His positioning game is outstanding for a player his age and he always seems very seasoned and hard-boiled. No wonder that he is rated as the defensive hope for “ze Mannschaft”. As a person, whose discrete and friendly ways make him the perfect role model, he would be a perfect candidate to represent our country. Mats Hummels is amongst the winners of last season and Borussia should be happy to have such a player on contract. He had his share in the team reaching the Europa League. His performance throughout the season can be rated “good” (2) 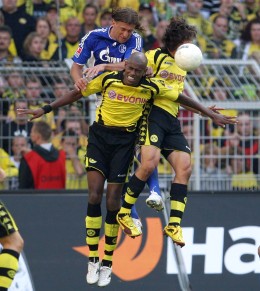 Arne: It was not quite the season of the BVB-Brazilians. Dede often on the bench, Tinga hardly played at all and Felipe Santana most likely hoped for more opportunities as well. 25 matches does not sound too bad, but he only started in half of them and played only few minutes in the rest of them. That should not be enough for „Tele´s“ aspirations so the next season should lead him to the crossroads. To gain a place in the starting line-up in the long run, Santana will have to step it up a notch, because his performances last season were anything but outstanding, although he did not blunder as obviuosly as he used to occasionally. But Santana is capable of much more. He should prove it to us and himself next season. Mark 4
Vanni: Had a hard time to get past Subotic and Hummels. I do not see him as a regular starter in the long run, too. But it is good to know, that we have a “Tele” on the bench in case one of the starters gets hurt. He was not that reliable this season and his positioning game leaves something to be desired, but at tackling and defensive headers he is second to none. The idea of bringing him on as a striker for the last few minutes, as we have seen Klopp do a couple of times, is not too striking to me. He should concentrate on what he´s good at and that´s his defensive game and headers after set-pieces. Mark 3.5
MalteS: „Tele“ was no more than a substitute this season. Though he was really reliable when on the pitch, his game was never flawless (mind his performance in Berlin). He is almost invincible at headers but his positioning game is rather doubtful. But he should get enough chances to prove himself in 2010/2011. Hopefully he can use them. Mark 4

Arne: The undisputed constant in BVB´s defence. Played the full 90 minutes in all 34 matches of the Bundesliga season. That benchmark will hardly be reproduced, even if his shape went down somewhat during the last couple of matches. All in all a more than well done season of the 21-year old. But even through the eyes of a devoted fan, the fantasy price tags that the yellow-press puts on Neven on a regular basis (more than €20m) seem hardly realistic. He would have to take a few more steps in his development to justify that kind of money. Not just because of this: This man has to stay, definitely! Neven is always good for the occasional blunder, but that´s no wonder for a player his age. The bottom line: A more than decent performance throughout the season. Mark 2 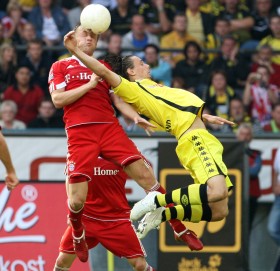 Vanni: Was not as strong as his counterpart Hummels and his postioning game was not flawless, but that´s forgiveable for a young player like Neven. He proved on a regular basis, that you can rely on him and 34 games over 90 minutes reads pretty impressive. Remember that no one really knew what to think of the transfer, when he arrived from Mainz for €4.5m before season 08/09. Since then Subotic went through a fabulous development and his market value is likely to rise further, as he is always a threat offensively as well at least with headers. His free kicks did not really scare the opposing goalies, as they usually end up far off target. But that is excusable as well, as the serb had a more than proper season, even though I did not see him quite as strong as Arne did. Mark 3
Sascha: Here´s a salute to the Premier League scouts. Subotic played a perfect season. No flaws, three goals scored and an absolutely modern defender, when it comes to building up the game from defence. Worth at least 25m, pounds sterling that is, of course – the Euro is not wanted anymore even in the Euro Zone. But seriously: He was often walking the thin line between genius and insanity. Sometimes he seemed very seasoned and together with Hummels as safe as the Bank of England but in other matches he would show seemingly careless mistakes and lack of concentration. His main strengths being tacklings and headers, but often with Jan-Koller-memorial passes in build up, that make you search in vain for the Czech giant in our central offence. All in all that makes a mark 3+. There is still room for improvement.

In the next edition of our season certification we judge the remaining defenders, our fullbacks Dede, Owomoyela, Schmelzer and Koch.