The torturing summer break and its benefits

Everybody of us knows the horrible feeling that's creeping through our veins, the lethargy in our heads when we look at the Bundesliga schedule and count the seemingly endless days until the glory yellow- black dresses will be worn again in the beautiful Westfalenstadion or anywhere else. We're all tired of rumours and even more rumours about rumours and so on.

How can this crazy guy write something about „benefits“ in the title? Is he already mad? But I got to tell you I'm not. It just occured to me when I was looking around all the old pictures that were displayed on top of the good old bvb-forum. There are so many memories linked to every single image, memories from everyday life, from inside the stadium or just some random thoughts that just appear in my mind while looking through the past. While chatting with a mate who isn't interested in football at all, I just expressed what those memories mean to me and what happened in the past. What is linking me to this club and what's so special about it. I felt like electric energy was running through my body, pure excitement. In the following I just collected a few stories that came to my mind. 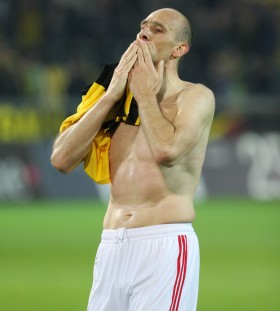 If I for example just take a short glance at Jan Koller standing in front of the Südtribüne in the end of the season 2007/2008 there is so much coming to my mind. He was a great player who always gave his best for our club. He was important in the cup- winning team from 2002 as well as during the following 4 years. The 4th may in 2002 was a very special day for me. I was just 12 years old and me and my family (including my grandfather) went to the Airport Düsseldorf. Proudly wearing my Dortmund shirt while watching planes (well, if you are just twelve years old that's quite impressing and my „career“ in the Westfalenstadion started about 6 months later) I felt so much tension about this match although I was just barely knowing what it really meant. When I got to know that our Ballspielverein won the final match against Werder Bremen I was screaming in joy around the airport. My grandfather has always been interested in football but I felt he didn't really understand me. However, it was the last thing me and my grandfather did before he went to hospital where he died according to much surgeries in the following weeks.

Okay, that was quite off the track and very personal, but if I go back to Jan Koller, I just can say that everybody who experienced the „Dinos“ return to Dortmund will never forget it. It was just amazing when the crowd celebrated a player who did so much for our club and when he came to thank us for all the love and respect we showed to the 202cm tall man.

Paper from the past 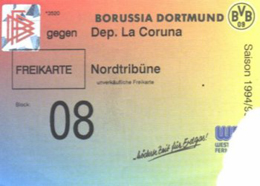 Another reason to look back was when I noticed the pictures showing old tickets from matches against La Coruna or international showdowns in Italy. Okay, I got to admit I've never been to an away match outside Germany. But just the nostalgia about the tickets made me take a look at old tickets I'm collecting in a box in my desk. There are so much good and bad things I remember when I look at single tickets. Memories of my first visit in Dortmund against Kaiserslautern in December 2002 or my first away match in Hannover which wasn't a game that makes me want to talk more of. Or the T- Home- Supercup 2008 which was the first time I went with a mate with whom I go to Dortmund every second weekend end even to matches of Borussia II now.

The second team is another good key word. I was just 15 when I saw my first away match ever. It was the 5:5 against Preußen Münster which meant that Borussia II was forced into a lower class for the upcoming season. My personal highlight with Dortmund II was the away derby in Wanne- Eickel (which was won by the most beautiful colours with 2:0) where several hundreds of Dortmund fans accompanied the team while there were not much more than a full hand of Scheisse fans. 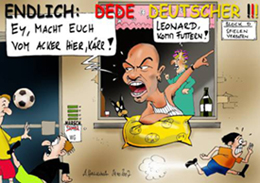 No more words about the bugs from a city thats name I won't ever use and back to Dortmund heroes. The picture about Dortmund heroes I like most is a comic about our well- known left defender Leonardo Dede displaying him wearing a „typical Ruhrpott dress“ and shouting at kids- a scenerie used to cartoon the fact that he became a German citizen. The story of Dede is simply impressing: He's the „foreign“ Bundesliga player who played the most games in our national league that have ever been absolved by a foreign player. A living legend who started his career in Dortmund in the past millenium and who is still wearing the yellow and black dress. A man who knows what are the benefits in Dortmund, who is loved and honoured by all Dortmund fans and who also respects even those fans.

But while looking through this huge collection of pictures you can also find very dark humour about... well... I will call it „not the brightest time of the club“. My personal favourite which requires a lot of gallows humour is Michael Meiers „to-do-list“ in Cologne. This man is responsible for so much suffering in the past, for the darkest hours of our club. But this crisis in finances and the caused-by-that lack in the sports department couldn't separate Borussia Dortmund and its fans- the opposite happened: The following years brought changes, the Fan Department came up and Fans an the club came closer together.

The stories above are just a very few of my personal experiences I made with a club which means more than a hobby to so much people in Dortmund, in Northrhine- Westphalia, in Germany and all around the world. But where are the benefits I mentioned in the title? The benefits of such a long time without Dortmund can only be the awareness of the past and the excitement about the following weeks. Every single one of us got his personal stories which reinforced their binding to Borussia Dortmund in the past. Now, during this extremely long summer break, we all can and should remember those stories regardless of where they happened. Every little story is a part of a giant one, written by Borussia Dortmund. Every single story makes this club more than a club.
Even my mate wants to give Borussia a try- a first step into a giant thing and more stories that might come to my mind in future summer or winter breaks and reinforcing the link to this amazing club.