Freiburg away or: The way is the goal 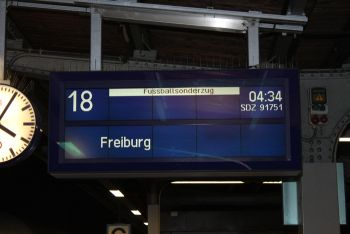 Getting tickets for the last day of the season is always a little bit tricky. Tickets are sold weeks before the match and you can only hope that you don’t have to see a match without any meaning for the ranking. The last match of our Borussia was something like it since Freiburg escaped relegation a week earlier and we had only small chances to fall down in the ranking. Even though the match in Freiburg was not a match with exhibition character, many supporters won’t forget this 8th of May because of the 3-1 loss in Dreisamstadion, but because of the long journey to the last match of the season.

Thanks to Borussia’s sponsor Evonik, the Fanabteilung of BVB could assemble a chartered train for round about 1.000 supporters of our great club. Unfortunately, this wasn’t enough at all since 1.700 guys wanted to travel by train so that the tickets for the train had to be allotted. Anyway, the fans who were lucky enough to get the tickets, started their journey at 4.34 am on Saturday, 14 hours before the match. Even at 2.30 am, Dortmund’s main station was filled with many supporters in black-yellowed suits ready to take on the long journey. Some people entered the train with a cup of coffee but most people brought beer with them. Anyway, the atmosphere in the train grew with the time we got closer to Freiburg and the “Sambawagen” was soon filled with fans willing to warm up their voices. The whole journey was well organized so we could have made it to Freiburg even earlier than scheduled but for some reason, the police in Breisgau didn’t want us to arrive earlier and this is why the train made some stops on his way to Freiburg, for example in Freiburg, were all fans had to wait for 30 minutes before the train could go on. 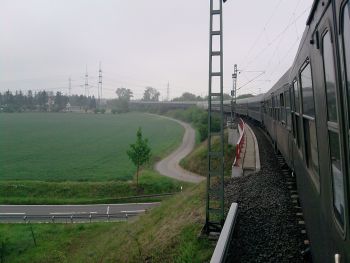 At 12.30 pm, we finally arrived at Freiburg and soon got in the next street car to Dreisamstadion. Not later than now, everyone had to notice that the atmosphere was really great since you had the feeling that the street car jumped over the street thanks to the Dortmund supporters who showed that this match should not become an away match, but another home match. Finally arriving at the stadium after a short way by foot through the streets of the city, you could again get the feeling that Dortmund supporters were like terrorists. Safety precautions were even improved and I personally was short before giving away my bottle opener for any reason whatsoever. Other supporters had the problem that away fans were not allowed to bring a mega phone with them and this is something which should be noted at the match later on that day… But let us not talk about the match, but about the travel home to Dortmund. 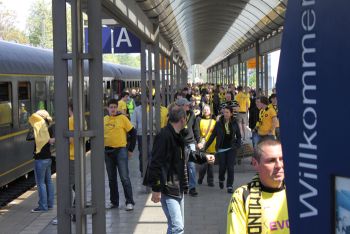 After eating and buying new resources of drinks, all fans got back into the train at 7.30 pm. After a match like that and that bitter defeat, you could imagine that the atmosphere was destroyed entirely… but this would be totally wrong. Instead, all BVB fans forgot about the game since it didn’t change anything and took the opportunity to celebrate a more than successful season with the comeback to Europe and rank 5. After a few minutes, the Sambawagen was flooded with Borussia supporters the heat got bigger and bigger. But so did the mood and that is why many travelers celebrated until arriving in Dortmund… celebrating with each other, celebrating with Borussia… saying goodbye to those fans who left the train in Cologne and Mainz… and saying goodbye to Borussia for the next weeks.