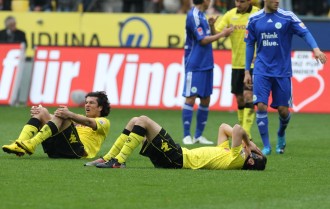 Goodbye Dortmund, Goodbye Champions League, Goodbye Championship, Goodbye Tinga! The 33rd matchday definitely was linked to the word "Goodbye". The first goodbye can be seen from two different points of view: On the one hand Dortmund can say goodbye to playing just in Germany and may welcome the opportunity to play in the Europa League the next season. On the other hand 80.300 people saw the last match of Borussia Dortmund in the Westfalenstadion for a seemingly endless period of time caused by the World Cup in South Africa. 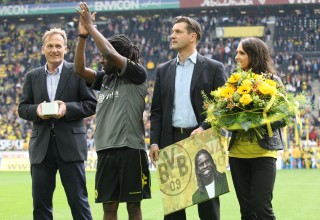 The next Goodbye was a moment of gratitude: Paulo Cesar Fonseca do Nascimento, better known as Tinga, and Borussia Dortmund said "Goodbye" to each other. Tinga, who has played in 98 matches for Dortmund since Summer '06, wasn't offered a new contract, so he will return to Brazil with his family. Right before the match manager Hans-Joachim Watzke and director Michael Zorc said "Goodbye" to Tinga, but also the Fans of Borussia Dortmund did their best to show Tinga how much he is respected and loved in Dortmund.

But also the opponent Wolfsburg had to say "Goodbye" to the status of national champion, because Bayern Munich won against Bochum while Bremen won in the Tear-Arena in Herne-West, which leaves only a very small and unrealistic chance for our unloved neighbours to become what they have dreamt of since 1958. Time to say Goodbye to their ambitions for Felix "the arrogant" Magath and his gang of rascals.

But back to the only important event of the 33rd matchday: Borussia against Volkswagen. The Ballspielverein still had a small chance to reach the 3rd place, which is rewarded by getting the chance to play in the qualification round of the Champions League. So our team, wearing the new dress, started well in to the penultimate match of this Bundesliga season. Dortmund was the better team in the beginning without having really good chances to score. The first good opportunity was in the 7th minute, when Kevin Großkreutz passed the ball to Barrios, but Benaglio was there to defuse the situation. Just a few seconds later Tamas Hajnal´s shot was as dangerous as Mats Hummel´s header, but none of them scored the goal. VW, playing in the ugliest colours anyone of us can imagine, didn't have good opportunities in the beginning. Then the match lost a little bit of it's speed, but our team still was clearly better than the club owned by Volkswagen. The minutes 24 to 27 were full of good chances of Barrios, Hummels and Sahin, but the black-yellow players couldn't overwhelm Wolfsburg´s defense.

But only a few moments later Barzagli wasn't able to score alone against Weidenfeller and so he shot over the goal. Then Dortmund came again. Kevin Großkreutz entered the penalty area and got fouled- Referee Brych pointed at the penalty spot! Enthusiasm and tension were the feelings, nearly everybody in the Westfalenstadion had and then Benaglio caught Sahins penalty. Normally, you would have expected the team to be shocked after failing a penalty, but Dortmund had several very good chances before Dr. Felix Brych ended the first halftime. 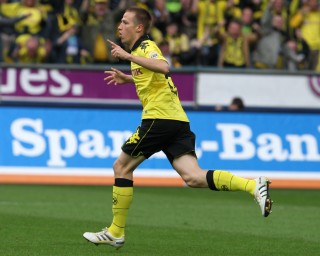 In expectation to see a typical Dortmund game, everybody was looking forward to see the usual second half of the match as Dortmund was better after the break regularly. But what the Fans of Borussia Dortmund then whitnessed was everything but the expected progress. Dortmund didn't act luckily and consequently enough - but Wolfsburg did! Wolfsburg played several good counter situations and their extremely good strikers Dzeko and Grafite appeared in front of Weidenfeller, who did his very best to prevent falling behind Wolfsburg. But after very good saves against Grafite, it was Edin Dzeko who scored the 0:1 in the 69th minute. Dortmund was shocked. But during the last 15 minutes, something special happened: It was very loud in the Westfalenstadion, from time to time the whole crowd was standing and singing and they celebrated the young team, which has achieved so much more this season, than most people had expected last summer, especially after the poor start.

Trainer Klopp replaced 3 players in 3 minutes so that Stiepermann, Dede and Rangelov played for Owomoyela, Kuba and Großkreutz. And especially Stiepermann, who wasn't known to many before, demonstrated why Klopp gave him the opportunity to play in the highest German football league. Besides showing some very good manouvers in the match, it was him, who equalized in the 80th minute. Although Dortmund's chances to reach the 3rd place shrank down to a minimum, the team received what it deserved after this long and good season. The crowd celebrated them even louder than before! And the team did it's best to make you feel they wanted to win, but Stiepermanns goal remained our only one during this match.

A little after Dr. Brych blew the final whistle, the team carried a banner to thank the fans for the support throughout the season and the fans said thanks in return by singing and especially celebrating Tinga one last time. But here we have another "Goodbye"- the chance to reach the Champions League qualification would have been obtained only by winning the match. I doubt there are many people, who are really sad about "just" playing in the EL next season, because this is a tremendous success. All in all we mustn't forget: Today was not the last "Goodbye" of this season - coming saturday, Dortmund might reach the 4th place to to secure a great end to this season that lifted us back into Europe. 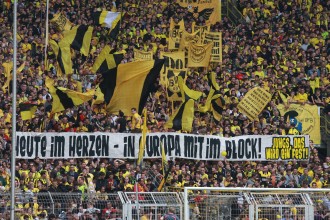 Here you can find some videos of the atmosphere in the Westfalenstadion during the match.