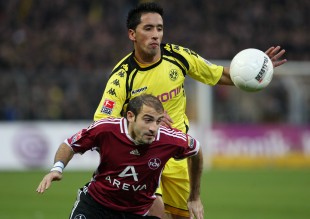 runch time babies! Borussia Dortmund is going into the final weeks of this season and there is so much at stake. The next match is on the road where we meet struggling 1. FC Nuremberg. As the Franconians are battling to avoid relegation this will be a fierce fight for sure.

Borussia Dortmund is in a tricky position at the moment. On the one hand there is still a slight chance to finish this season on a Champions League spot. The blackyellow lads are just one point behind Werder Bremen on spot 3. Nonetheless on the other hand we still didn’t secure Europa League qualification. Teams like Hamburg, Wolfsburg, Stuttgart are pressing from behind. Therefore it is crucial to win this coming match…..with both targets in mind. Especially as European football would pour in some more money from TV stations, sponsors and gate revenues. That would for sure bolster our potential in the transfer market where players like Polish striker Lewandowski are on the brink of signing with BVB.

Nuremberg are in a different position. They are in the middle of a tough fight against relegation. At the moment there are 5 teams of which 2 will directly relegate while one team will play a play-off against a second division team. Therefore they will fight to the end to come out of this match with a threepointer. 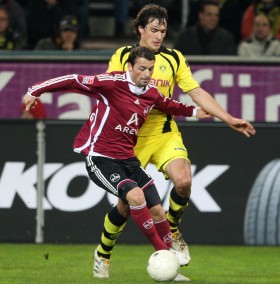 Borussia Dortmund coach Jürgen Klopp won’t come up with too much changes. Schmelzer, who missed the last match due his fifth booking, will replace veteran Dede. Tamas Hajnal or Nelson Valdez will start instead of Mohamed Zidan. The tiny Egyptian striker torn his anterior cruciate ligament last week and will be out for 6 months at least. Sahin, who broke his nose last week, will start with a facial mask.

Dieter Hecking will line-up Nordtveit instead of Wolf. The skipper will miss this match due to a thumb operation. Maybe the Franconians will bolster their defence and line up Tavares instead of Frantz.