5 reasons why we are ready for Europe 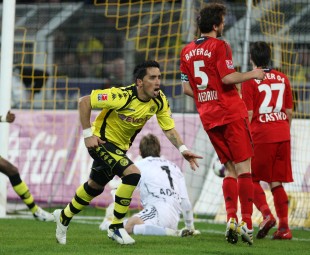 WOW! Even 2 hours after the match, I can’t still really believe it! We have beaten, no, we have destroyed the team with the least defeats, Bayer Vizekusen, 3-0 and proved that we are ready, no, more than ready for Europe. Once again, a popular song was impossible to be overheard in the Westfalenstadion and over 80.000 fans (minus the fans of Vizekusen) celebrated the victory, dreaming about what could be so near: First round to Olmütz, then HSV, perhaps to Liberec… keep on dreaming, Dortmund fans around the world… this year, this dream can finally become true!

Things didn’t look very good before the match. Nuri Sahin was booked for the fifth time in Bochum and had to be replaced. With Sven Bender not being able to play, Jürgen Klopp had to improvise and therefore, Tamas Hajnal, normally offensive midfielder, built the double-six with skipper Sebastian Kehl. In addition, Nelson Valdez couldn’t take a place on the bench since he is recovering from a rupture of his muscle fiber and Dede wasn’t ready to get into the squad. But the fact that Lucas Barrios, whose chance to play was questioned over the last week, actually was ready, turned out to be the most important one. Vizekusen on the other side had no reason to change everything and Jupp Heynckes trusted the eleven players who won impressively against Hamburger SV last week. This included that German talent Toni Kroos wasn’t back in the line-up after he missed against HSV due to his fifth yellow card. 80.300 fans travelled to Westfalenstadion so that Borussia could welcome the millionth visitor at matchday 27. This impressive number can only be topped by FC Barcelona in whole Europe, being fact one to prove that we are ready for Europe. 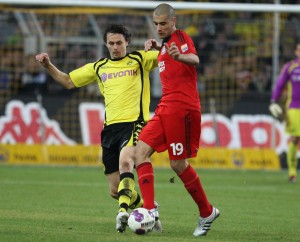 Let’s keep it short. Borussia had no real opportunity to score and during the first twenty minutes, we had problems to come into play. Only Roman Weidenfeller is the reason why we could go to the break without any consequences. He reacted brilliantly against German top scorer Stefan Kießling who suddenly appeared right in front of him (11th), then got his hands on the header of Swiss national Eren Derdiyok who had too much space around the penalty spot after a nice cross of Gonzalo Castro from the left (20th). The other thank-you goes to the right post of the goal in front of the Nordtribüne which stopped a shot of Derdiyok from the edge of the penalty area after Renato Augusto brought the ball in from the right and Kießling let the ball pass (42nd). Like I said, no opportunity for us at all, but with the recoupment of coming into play over the last minutes of the first half, we could have looked forward to the second half optimistically. Fact two to prove that we are ready for Europe: Even in danger, we don’t get shot! 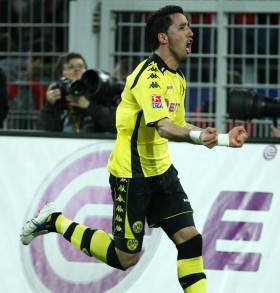 Then, suddenly, everything changed. Suddenly, we had opportunities, suddenly, there was Kevin Großkreutz who only had German national Keeper Rene Adler in front of him, but Adler got his foot on the ball. The result was a corner kick, which was brought in from the right by Tamas Hajnal, elongated by Owomoyela and then, suddenly, Lucas Barrios was where a goalgetter has to be. In the middle of the action, scoring and blowing off the roof of the Westfalenstadion (50th). “Borussia! Borussia BVB…”! The atmosphere was terrific; everyone was on their feet and once again dreaming about Europe. Nine minutes later, Barrios intercepted a pass of Barnetta and showed all his quality. One look to Vizekusen’s goal, noticing, that Adler is standing on the edge of the penalty area, chipping the ball from a distance of 44 metres and almost scoring, when Adler finally cleared the ball at the cost of a corner kick. But only a few seconds later, once again, a pass of Vizekusen was intercepted when Zidan got the ball after a failed pass by Renato Augusto, a nice long pass and Barrios with the next brace after having scored twice in Bochum last week (60th). Cold as ice, he had no mercy with Rene Adler and scored for the 15th time during this season, getting the second place in the goalgetter ranking behind Stefan Kießling (16 goals). Fact three to prove that we are ready for Europe: We have Lucas Barrios! The Westfalenstadion was trembling and Borussia dominated Vizekusen like perhaps no one before during this season. Hajnal (64th) and Zidan (65th) had the chance to make the decisive third goal, while our fans sent home Vizekusen’s supporters with thousands of tissues and a nice farewell (“You have paid, so go home now!”). Fact four to prove that we are ready for Europe: We have the best fans in the whole world! Vizekusen was beaten, Zidan had to rescue one time against Derdiyok (69th), and Weidenfeller saved a shot by Kroos (83th). To make the evening even more unbelievable, joker Rangelov, who came in exchange with Barrios fifteen minutes before and made his comeback after being out with a disruption of his foot, conquered the ball at the halfway line, marched straight to Vizekusen’s goal and showed his ability of scoring goals for the first time in Dortmund. 3-0, big victory, big party, unbelievable, shocking, legendary! 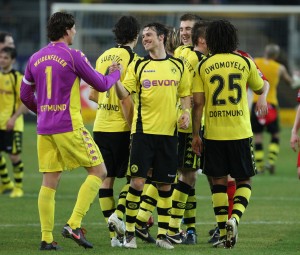 Even though Werder Bremen got the victory over Grey Mice Bochum after overcoming two deficits and even though, blue-white could become number one with a victory over Hamburger SV tonight, we have everything to be proud of. We are still number four, we could end up having a cushion of fife points to a Non-Europe rank and we can watch Bremen against Augsburg calmly in the semi-finals of the German Cup on Tuesday. If Bremen wins, even the sixth rank would be enough to qualify for Europe. And as far as Herne goes… Jürgen Klopp proved fact five why we are ready for Europe when being asked about his wish for the outcome of the match against Hamburg tonight, Kloppo answered “I don’t care.” So fact five why we are ready for Europe: We have the best and most likeable coach!

Subs: Helmes for Kießling (46th), Kroos for Renato Augusto (66th), Lars “not the real one” Bender for Barnetta (66th)