Countdown for an exciting Saturday evening 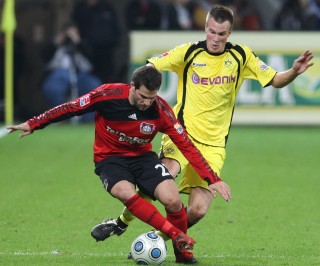 More than 1.000.000 visitors - for the 12th time in a row – really the best argument that Borussia is absolutely fit for international matches. And on Saturday evening we hopefully will see a successful next step on our way to Europe. After two wins in the previous two matches, Borussia welcomes Bayer Leverkusen, one of the favourites for this year’s German championship! Leverkusen is currently at position 3 in the league, three points behind leader Bayern München.

Some personal remarks about Bayer Leverkusen’s past and present:

For sure, most of Leverkusen’s supporters will not agree when their team will be described as a subsidiary of the world wide Bayer concern or a team created in a retort. But it’s simply the truth. Founded in “1904” (a terrible year in the eyes of all Borussia supporters – if you don’t know why, please stop reading immediately or better change to the website of a club in Gelsenkirchen!) as an association mainly for athletics, Bayer Leverkusen’s football team joined the Bundesliga without any interruption since 1979. It would take too much time to mention all the popular players in Bayer’s team including the former ones like Michael Ballack or Rene Schneider. But only a club with enough financial power and a financially strong sponsor can afford such first class teams during the last decades. In consideration of Bayer’s high investment, the number of titles seems to be not so impressive: UEFA cup win in 1988, German cup winner in 1993 and vice champion for 4 times between 1997 and 2002. Especially 2002 was something like a tragedy for Bayer Leverkusen. Vice champion behind BVB, vice cup winner and a lost champion league final brought Leverkusen the nickname “the eternal number 2”. 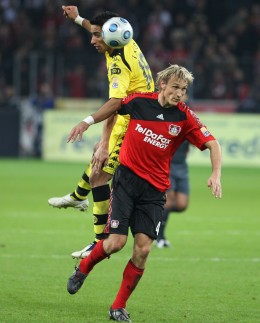 But let’s change from past to present. Much to everyone’s surprise Bayer hired Jupp Heynckes, the “grand old man” as new coach for 2009/2010. A good decision: Leverkusen topped the league for 17 matchdays and lost only at penultimate matchday in Nürnberg. The team answered discussions about a beginning typical Leverkusen-crisis with a 4-2 victory over Hamburger SV and retained the hopes of winning the first ever Bundesliga title.

Taking a look at Bayer’s actual squad you will find a lot of well known and international players. Goalkeeper Rene Adler, defender Manuel Friedrich, midfielder Toni Kroos (on loan from Bayern München), strikers Stefan Kießling (with 16 goals top scorer of the league) and Patrick Helmes are current or former German internationals. Their teammates like Renato Augusto from Brazil, Swiss Eren Deridiyok and Tranquilo Barnetta or Finn Sami Hyypiä are also examples for highest quality in football.

No question a hard job for Borussia’s team and Jürgen Klopp to find out the best strategy against Bayer Leverkusen. So we all are full of hope that Lucas Barrios will be able to play. “La Pantera” pulled a muscle in his right thigh and until Saturday this smaller injury should be recovered. Nelson Valdez will not be available for the match against Bayer. Nelson injured a muscle in his left thigh last week in Bochum again. His plan is to return to the away match next week in Berlin. Sadly we will miss our midfielder Nuri Sahin due to his fifth yellow card last week in Bochum. Possible substitutes for Nuri could be Tamas Haijnal or Sven Bender. Tamas is able to play but Sven started training only for two days. It will be Jürgen Klopp’s decision who will be first choice. Maybe there is a little advantage for Sven Bender due to his strong performances as a defensive midfielder. No more doubts about Roman Weidenfeller: Our regular goalkeeper suffered from circulatory disturbance shortly before the kickoff in Bochum. A detailed checkup during this week ended with positive results. Roman’s health is OK and he will join the green against Bayer. And let us not forget our defender Mats Hummels. Healing of Mats’ broken jaw is in good progress and his personal target is to return in three weeks for our match in Mainz.

What can we expect on Saturday evening? Borussia welcomes one of the best teams in the league - some experts even classify Bayer Leverkusen as the best! That means full concentration and a lot of work for our team. In Borussia’s press conference on Thursday Jürgen Klopp gave the right comment about Bayer’s and Borussia’s qualities and chances: “Bayer Leverkusen is a top team with high class individual players but with high class teamwork on Saturday we will be able to beat them in our home match” A sold out Westfalenstadion except for 2.000 Leverkusen supporters (or even 3.000?!) would be more than happy about that!