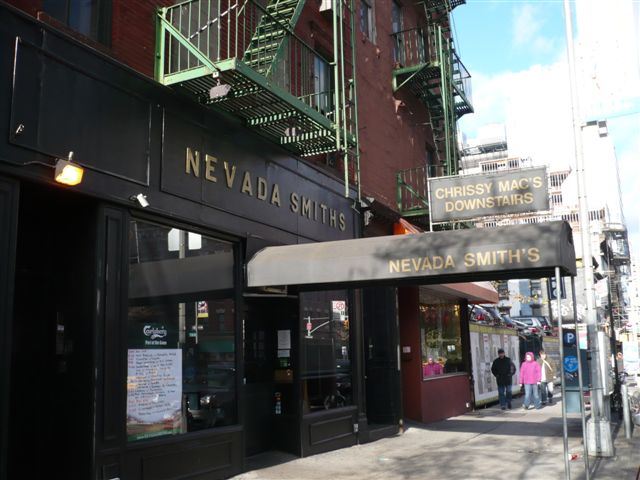 Two years ago I wrote a small report about my personal trip to New York City. Maybe it’s the world’s most thrilling city, but also an area where “football” or “Borussia Dortmund” seemed to be unknown foreign words.

This year we travelled again to the city that never sleeps and of course, Christmas time is a very special time in NYC! You find Christmas trees and Christmas decorations everywhere and a jingle bell rung by Santa Claus in front of nearly every department store! Apart from visiting NYC’s musts like the Empire State Building, Time Square, Rockefeller Center or Brooklyn Bridge this time we received a lot of new impressions! As there are for example: the celebrations in Central Park for John Lennon’s 30th anniversary of death, the construction works at Ground Zero, the new public Highline Park located in Meatpacking District and … Nevada Smith’s! Nevada Smith’s? What does it mean? An old wild west hero? A new opened gambling house in Manhattan? No! Much better! 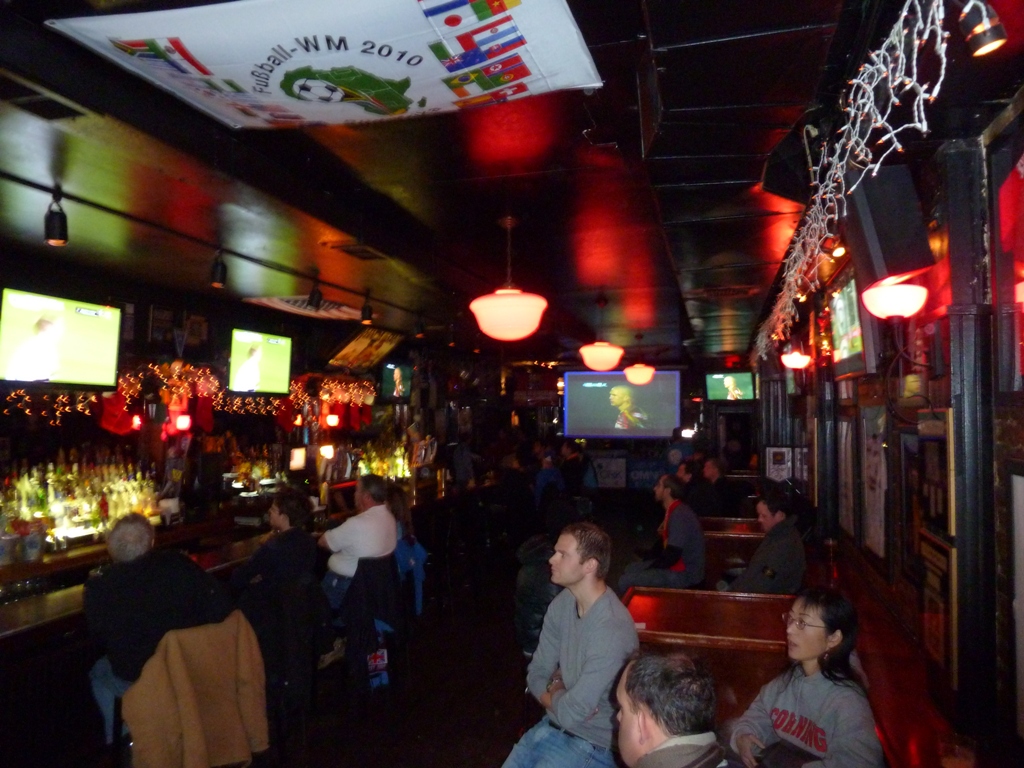 It’s high time to explain NYC’s latest and for football fans most important attraction! All the years before it was hard for everyone who spend some time in NYC to get scores and results from matches of Borussia Dortmund and other Bundesliga clubs promptly! We always had to depend on receiving phone calls or SMS messages from home. And very often we waited impatiently for news with the mobile phone in our hand and nothing happened! Now these hard times are over due to Nevada Smith’s!

Nevada Smith’s is a typical American sportsbar located on Manhattan’s 3rd Avenue, between 11th and 12th street. A lot of TV screens of each size on every wall, only showing football (I confess, I hate the New York name “soccer”!). No basketball, no American football, no baseball – only European and South American football! The total paradise deep in the heart of Manhattan! 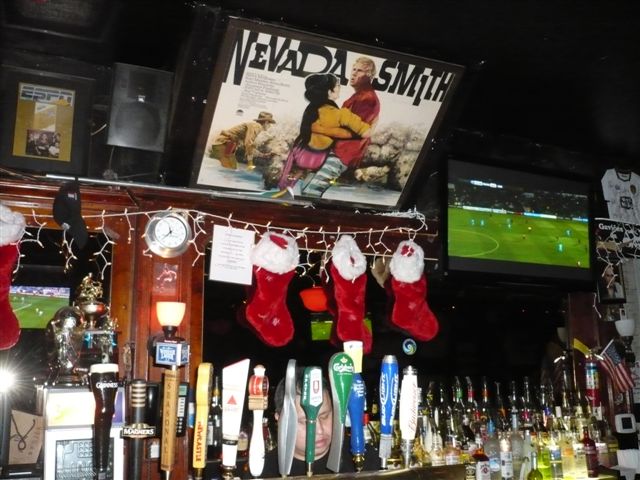 Before we started our journey to NYC I read in the internet about this fantastic pub. Jack Keane, the Irish proprietor of Nevada Smith’s came to Manhattan 18 years ago and one of his greatest needs was to watch football matches live on TV. No easy task for Keane, a Manchester United supporter, in a “football desert” like Manhattan. So he opened this wonderful pub, showing the most important matches of the European leagues and you can combine watching the match perfectly with drinking a cold beer. A great atmosphere, thousands miles away from the Westfalenstadion or from the pubs located around our beloved stadium. The often crowded pub is proof enough that Nevada Smith’s bridges one of the biggest gaps in New York’s pub and sport scene! 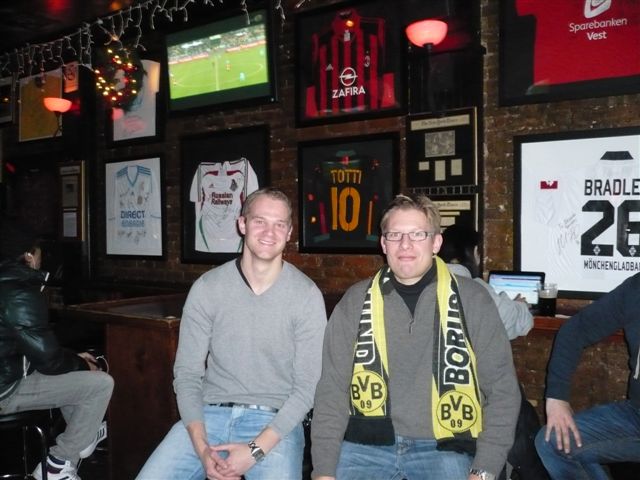 It was easy to find Nevada Smith’s location and when we opened the door we glanced at Jürgen Klopp’s typical unshaved face on one of the biggest TV screens in the bar. Now we all knew – this is the right place to watch Borussia’s match live in Nuremberg! Much to our surprise we were not alone as Borussia fans! Alex from Münster and Frank from Bonn, both out on business in NYC, also wanted to watch Borussia live. And like us as real Dortmund fans they discovered Nevada Smith’s as the one and only pub to enjoy Borussia’s match live. Next to us was sitting Chikako, a Japanese girl who got more enthusiastic from minute to minute. Reason was not only Borussia’s first goal in Nuremberg, but also the fantastic Shinij Kagawa in black and yellow! 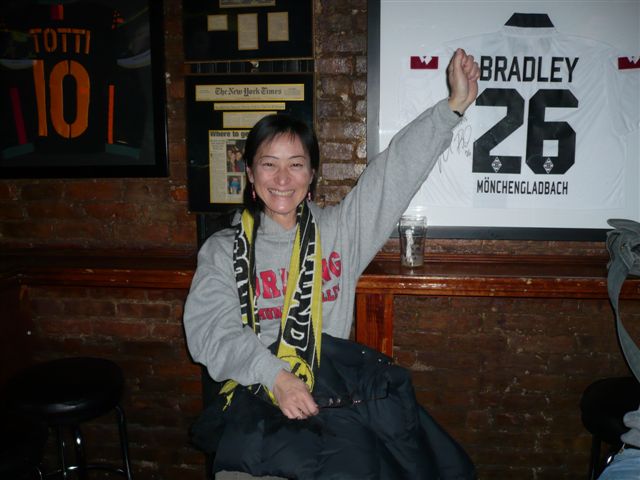 Chikako has been living in NY since a lot of years and is a member of a Japanese Taiko Drums Ensemble. “I’m a big fan of Shinji Kagawa and since Shinji is playing for Borussia, I’m also a Dortmund fan “she explained to me. No doubt, Chikako, you made the right decision!
We all know the final result: a 2:0 win for Borussia and 6.400 kilometers away from Nuremberg, it was party time at Nevada Smith’s, when one Japanese and four German BVB supporters celebrated Borussia’s 8th away match!

So at last here’s my final recommendation for trips to New York City in the future:
The big apple has a lot of attractions, don’t miss them! But if you will be in Manhattan on a Borussia Dortmund matchday – stop shopping or sightseeing immediately and please go directly to Nevada Smith’s, really the best sportsbar in town!