It is kind of getting boring... 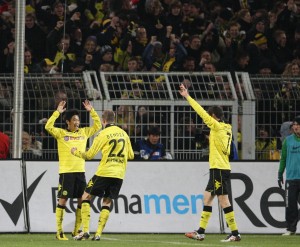 ...you know, winning week after week, I don't even know what it is like to lose anymore. Really boring. Who am I kidding? This is most certainly never getting even slightly, remotely boring at all. It is only getting better and better. In the second last game of the first half of the season, our Borussia managed to send Werder Bremen home with a 2:0 home victory. Since Lucas Barrios was back again, he took over his familiar position, which resultet in Lewandowski taking a seat on the bench again. Furthermore Kuba took over the position on the right side, while Götze walked over to the left so that Kevin Großkreutz could take a break. Bremens coach Thomas Schaaf on the other hand had to disclaim the injured Arnautovic, where as goalgetter Pizarro was okey again. About 6000 fans from Bremens side were attending the game in our Westfalenstadion and showed great support for their team by showing off a choreography filled with green and golden colors. Nice one. On our side it was same old, same old. Like every year at the last homegame of the year, the "Sonnenkinder" came to sing us a couple for songs and as usual the Southtribune found great joy by singing along to Jingle Bells. 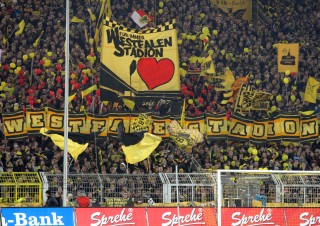 The first half of the game started out exactly the way we had wanted it to start out. Dortmund began faster, more lively and eager than Bremen, pushing towards their goal from the first moment on. In the 4. minute of the game Kagawa had the first chance of the game but unfortunately missed after nice assist by Barrios. Despite the rush of energy Bremen must have gotten from winning against Inter Mailand, there was not a lot to see from that in the first 20 minutes of the game against our Borussia. Bremen struggled to keep up with Dortmunds fast moving players and very often fouls were the last opportunity they seeked in order to stop our players. In the 09. minute of the game it was another foul close to the penalty area that resulted in a free kick for us. And what a free kick that was. Sahin grabbed the ball and shot it right over the wall of Bremens players in the right corner of their goal. 1:0. You cannot possibly shoot a free kick better than our Nuri did in that moment. Everything was going well and Bremen seemed to be too impressed to react. Dortmund continued to be the dominant team of the game but took some of that early energy out of the game. However, even that was enough to keep Werder Bremen from playing football. In the 22. minute it was Sahin who decided to test Bremens keeper Wiese one more time. Wiese struggled to catch the ball properly but succeeded in the second attempt. After that the game seemed to lose more and more of its energy. It appeared that Dortmund tried to save some of its strenghts for the difficult game against Sevilla on Wednesday and since Bremen was as harmless as you could imagine, Dortmund didn't even need to do more than they actually did. A couple of minutes before the break Bremen then decided to show that they could actually play football as well, and after a nice give and go with Pizarro, Bremens Aaron Hunt shot the ball onto our goal but Weidenfeller parried. Shortly after that it was time for a break. The Saturday evening game is supposed to be the top game of the weekend but to be honest, after 20 minutes had passed it lacked a lot of the energy that a top game should hold. On the other hand Bremen did not really attend the game from the beginning on and we do not always have to play with fireworks and what not. We were satisfied with how the game had gone so far and were looking for a good second half that would follow. 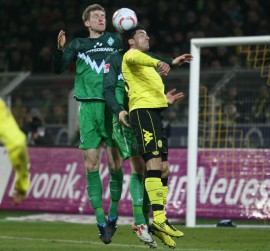 The second half of the game most definetely got a lot more better in terms of excitement but nut necessarily in terms of Dortmunds football playing. While Kagawa and Barrios both managed to slide past the ball after a nice cross by Kuba in the 48. minute of the game, Bremen suddenly seemed to have woken up from their sleep and decided that it was time to play football in order to take home at least one point. The following minutes brought some heat into the game. After Bremens Pizarro was offside, he jumped over Roman Weidenfeller who had thrown himself onto the ground. Unfortunately Pizarro stepped on Roman Weidenfeller and got a yellow card from that. Only a couple of minutes later it was again Roman Weidenfeller and Pizarro who drew the focus onto themselves. After Pizarro had run into the penalty area with the ball close to his feet, Weidenfeller threw himself on the ground again, touching Pizarro, who then fell on the ground. The referee decided that it was a normal contact between two players and denied Bremen a penalty kick. It was a difficult decision. To be honest, we shouldn't have been upset if the referee had actually given Bremen the penalty kick. At that point of the game Dortmund seemed to have forgotten how to play football properly, instead of keeping some quiet in the game and starting out sorted from the back, our players only shot the balls far away into the other half of the field, hoping that it might find one of the black and yellow players. Most of the time, however, the ball landed right in front of the feet of one of Bremens players. In the 70. minute of the game, when it seemed like Dortmund was actually waiting for Bremen to score, it was our players who scored. I am actually sure that the people around me could hear all the stones falling dropping from my heart down to the ground. After a nice run down the right side of the field, Kuba crossed the ball into Bremens penalty area, Wiese however had his fingers on the ball and hit it towards the direction where Kagawa was waiting. He used the chance and kicked the ball right into Bremens goal. And there again we have to admit that this goal should never have counted. Since Kagawa did not shoot the ball into Bremens goal all on his own but hit Lewandowski (who had been in the game for Barrios) on the head. Lewandowski was standing offside though, which was very difficult to see for the referees, even I only realized it after watching it again for the third time. On the other hand, to be honest, I couldn't care less. All that mattered to me was the fact that we were 2:0 in the lead. And like I mentioned in other reports of other games, I don't believe that wrong decision made by referees are the worst thing on the planet. Because for every decision against you, you will most likely get one for you as well. Maybe not in the same game, but some other time for sure. Only a couple of minutes later Bremens Marin had another chance to score by shooting from a bout 20 meters distance, however, Weidenfeller parried the ball. After that Bremen found little means in order to score up until the last minute of the game when Bremens Aaron Hunt had another chance. Our Matts Hummels, however, was alert and saved the ball from going into our goal. Three minutes past the actual time the game was over and we drew in the 14. victory of this season. Amazing. 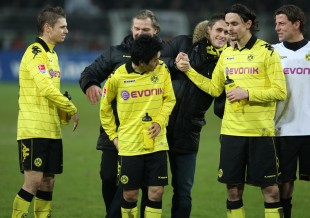 It was surely not the best game we had seen this season but who cares? All that matters is that we were dominat for the most time of the game and managed to win. We now have 44 points and one game ahead of us in the Bundesliga, against Frankfurt. Whatever the outcome, this season is probably the best thing I've ever watched my BVB doing. I had to work in the bar later that night, which is, as I have mentioned before, a Werder Bremen bar. Let me tell you, the people there were not too enthusiastic about the game. Especially later that night when Dortmund fans entered the bar as well, there were a few arguments which of course were sealed with a few beers afterswards. All's well that ends well. Let's hope this phrase also counts for us in Sevilla on Wednesday. Good luck BVB, we keep our fingers crossed and surely believe in you. See you next year in our beloved Westfalenstadion....