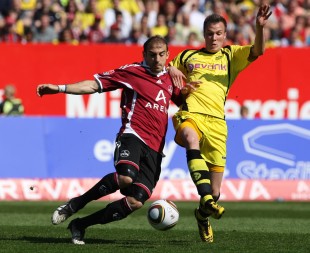 Ok, ok.....leading the table during the winter break is nothing to fill your trophy room. Still with Mainz losing 1-2 in Frankfurt our black-yellow boys will remain on top of the Bundesliga table at least until the start of the return leg. Nonetheless it won't hurt collecting some points in Nuremberg this Sunday.

Borussia Dortmund mastered their task during the week with an easy 3-0 win on home soil against Karpaty Lviv. Because of Paris St. Germain's 4-2 win against Seville, BVB will have a last chance to proceed to the next round of this season's Euro League. They need to win in Andalucia to achieve this goal. Many black-yellow supporters will travel to Spain to help their team. Surely this Euro campaign ain't over yet. But let's get back to Bundesliga business. Borussia Dortmund is still on an unbelievable Bundesliga run at the moment. 37 points from 14 matches, won all of their 7 away matches and now 5 wins in a row. But keep it down low. We haven't achieved anything yet. If we want you capitalize on this comfortable position we should earn as many points as possible before winter break. And don't be fooled. Nuremberg won't be an easy kick. The Frankonians have a solid team with some qualities. Surely their hottest target at the moment is Gündogan. The young midfielder with Turkish roots has shined last season and continues to deliver. Europe's big guns like Manchester United are trying to secure his signature.

Nuremberg's coach Dieter Hecking has to cope with some missing players. Javier Pinola is still red card suspended, while central defender Nilsson, midfield wizard Bunjaku and Frantz are injured. So FCN will probably start with a 4-5-1 or let's say 4-2-3-1 tactics. As the team lost 3 matches in a row and received 3 goals in each match, Hecking might start a little bit more defensive, standing deep in their own half. Nonetheless they have the ability to play fast counter-attacks via Gündogan and striker Julian Schieber. 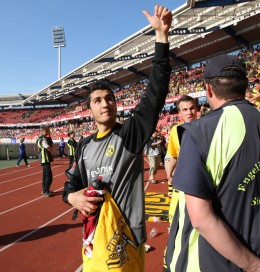 Dortmund coach Jürgen Klopp won't do many unnecessary changes. Barrios is still missing due to an injured knee, but will probably be back next week. Polish marksman Robert Lewandoski will take his position. In central midfield Kagawa will start, despite being handicapped a little bit. If he misses out, Zidan could return to Bundeslifa football after his longtime missing due to a torn cruciate ligament. Owomoyela is still missing due to Achilles's tendon problems. We will start with Roman Weidenfeller in goal behind our flat four Piszeszek, Hummels, Subotic and Schmelzer. In holding midfielder Sahin and Bender are doing their job. On the wings Kuba and Großkreutz start, there is still a slight chance that young prospect Mario Götze might take one of the winger positions.