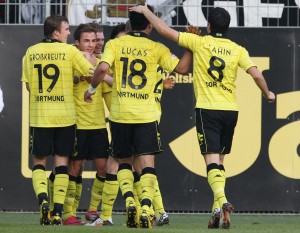 We fall together, we get up together. This game, however, showed the excitement of Borussia Dortmund these days. An example for that? One is innocent 18 years old, the other grown 30 years old. Despite the 12 years age difference both managed to become the heroes of the game. But even though those two players stood out, I have to repeat myself over and over again. This team is pure frenzy.

We tell the story of the 31. of October in 2010. The chart of the Bundesliga does not really look the way people had expected it before the start of the season. The "Newcomer" under the pole position seekers FSV Mainz 05 was first. Over the years troubled Borussia Dortmund, who have been on the rising side throughout the past couple of years, on number two.Bayern and Schalke somewhere else, not even close. On this Sunday the game between the first and the second was due to take place. 180 countries from all over the world were watching. The positions promised a good game. And we were not proved wrong. It was an extremely good game, for every objective football fan great to watch and luckily for us Dortmund fans with a happy outcome.

After the drop out of the DFB Pokal on Wednesday, Jürgen Klopp changed his team on two positions. Bender was back again and took back his well known position while Großkreutz gained back his position forcing Lewandowski to take a seat on the bench again. The weather was beautiful, everone was in a good mood and eager for an exciting game. Let the show begin.

The conditions were promising and Mainz were the first ones to find an answer to them. The game began on a level of very high speed and lots of positive fights and entertainment. Even though the viewers hat to wait about 15 minutes to see the first chance of the game, it was still a great game to watch. Two very eager teams who both desired the pole position of the chart. Even though Mainz began a bit more faster than Dortmund did, it was us who had the first chance of the game. In the 15th minute Lucas Barrios got the ball and ran towards the goal. With a couple of Mainz players behind him and the keeper Wetklo in front of him, he had to face a decision that only missed the goal by inches. Barrios tried to dupe Mainz' keeper by shooting the ball passed his left, it might have been a better idea to just lift it over keeper Wetklo. Bad luck. Only a few minutes later the laughter was on our side when Mainz' keeper Wetklo had difficulties to stop the ball with his feet, after a simple pass from one of his own players. The ball rolled over the outline. The game stayed fast and within the next five minutes there were chances on both sides.

Barrios and Götze missed due to a very strong Wetklo and Szalai failed twice in front of our goal. To this minute( 23) already we could tell one thing: this game was great. Mainz acted really fast and eager, while Dortmund presented some moves that were pure enjoyment. It was an important phase of the game. After Dortmund had had a rough 120 minute game on Wednesday the fast playing Mainz players were not that easy to settle. In this important phase of the game our youngster Mario Götze broucht joy into our hands. A well played affront from our side was stopped by Mainz. Marcel Schmelzer, however, did not gave up and forced Mainz to make a mistake. The ball fell to Sahins feet who tried to pass the ball to Götze at the line of the penalty area. Again Mainz managed to stop, however they stopped the ball perfeclty for Götze who came, saw and conquered. Great goal, 0:1 for us. This goal did not happen one minute to early. Mainz was acting really strongly and this goal gave us a head start that affected Mainz' game immensly. Dortmund now had the upper hand but failed to use it in order to arrange the game a bit more relaxed. In the 34th minute of the game Barrios had the chance to score the 0:2 for us but managed to hit the goal post from only two meters away. Tough luck. Ten minutes later the break was due and both teams were allowed to calm down a bit. The first half of the game was promising. It consisted of everything a top match was supposed to consist of- goals, chances, fights, running and great moves. On both sides. We were on the lucky side after the first 45 minutes. But there we still 45 minutes to be played and the lookout was promising. 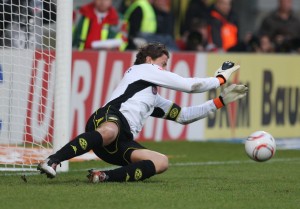 Basically the second have began the same way the first half had began. Mainz was dominat, Dortmund operated. Subotic, however,operated a little bit too enthusiastically. He straddled Allagui off his feet in the 48th minute of the game. Unfortunatelly all this happened in our penalty area, therefore, penalty kick for Mainz. Let's come to the second hero of the game this day. We are all Dortmundfans. And usually we support our team all the way through. But a fan should also be allowed to criticize every now and then. I must admit, I did not have the greatest trust in Weidenfeller when it came to this penalty kick. I definetely am a fan of Weidenfeller, but I know he had greater strenghts than holding a penalty kick. He proved me wrong. In my mind I had already accepted the 1:1, what followed were screams of happyness. Mainz' Polanski failed to shoot the penalty kick in because our Roman Weidenfeller had decided for the right corner of the goal and held the shot. Bravo Roman.

Irritated but not giving up, Mainz continued to play great football, lucky for us, they did not manage to used their chances accuratly. And suddenly there was some sort of deja vu. After Mainz had had a very strong phase in the first half, where Dortmund managed to score at the perfect time, it was supposed to happen again. While Mainz had the upper hand in the first 20 minutes again, it was again Götze who had the eye. He waited for the perfect moment to pass the ball left to Barrios, who then curved around Mainz' Wetklo and shot the ball into the goal. 0:2 for us. Again, at the best possible point of the game. But what a wonderful pass from Götze to Barrios. After Götze had the eye for the goal in the first half, he now had it for his fellow team member. This is football the way Dortmund plays it these days. They have weaker moments, but most of the time it is a total joy to watch them combine and play and send passes all over the field. There were few more chances on both side but nothing that really dangered our victory. In the end Dortmund was allowed to take home three well deserved points. Even though Roman Weidenfeller and Mario Götze stood out today, it was again a victory because of the achievment of the whole team. The way Bender held the control over the lower defense, the way our defense worked both ways front and back, the way our offense worked back and forth, it was simply fun to watch. 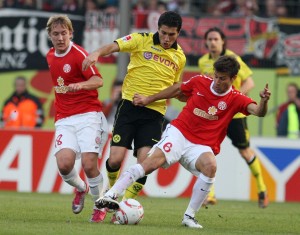 As a Dortmund fan it was a perfect day of course. We won against Mainz and therefore took over the number one position of the chart. We also set a new record. Never in history had one team won the first five away games all in a row. Congratulations to that. Götzes goal in the first half can also be marked as goal number 2500 in our history. A nice number as well. This day, though, was also a perfect day for any football fan in the world. This game had everything a good football game needs to have. It did not lack anything. It was a fair game, it was a fast game, there were great duels, we saw goals, we saw a great fan support and most of all we saw two teams who deserve the position they hold at the moment.
As for you my dear BVB, I admit I have been frustrated after the Cup game against Offenbach. And there is still a difficult game against Paris ahead of us. But the joyful moments you have given me and still give me are worth the ten minute long frustraten I went through a couple of days ago. The way you play puts a smile on my face and where ever this road may take us, we will come along. After all, we fall together and we get up together again. But I have a feeling that we will keep on standing for a bit longer now...