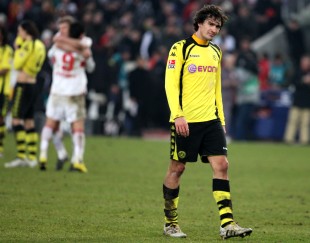 After Borussia’s defeat against VFB Stuttgart there is no reason for us to fall in deep depression! If we take a look back on last Sunday, what’s the summary of BVB’s 1:4 defeat in Stuttgart? Until minute 77 the score in Stuttgart was 1:1 and Borussia was closer to a second goal than Stuttgart. But that’s football: three goals in the last 13 minutes and all our dreams of a seventh win in a row were over! Luckily, and that’s most important for us nothing happened in the table: All other teams in competition for a place in the European league next season also lost or didn’t win. So our Borussia is still at position 4 and we are still eight points ahead of Werder Bremen, currently at sixth place. Not such a bad starting position for our match this Sunday against Eintracht Frankfurt!

After a 1:2 home defeat last week against Cologne, Eintracht Frankfurt is at the moment number 7 in the league. We should not say that’s no man’s land of the table, there are 14 remaining matches and a lot can happen until season’s end in May! During the last weeks Eintracht Frankfurt hit the sport news not so much with news from the green but more with internal problems. There were a lot of reports about heated up discussions between coach Michael Skibbe and manager Heribert Bruchhagen. Skibbe, from 1998 until 2000 coach of Borussia wanted an upgrade for Eintracht’s team with new players. On the other side manager Bruchhagen preferred to minimize costs and investment due to Frankfurt’s limited budget. In the end two new players joined Frankfurt’s squad before closing of transfer list: Defensive US international Ricardo Clark from Houston Dynamo and striker Halil Altintop, from a Gelsenkirchen suburb club. 27 years old Altintop, twin brother of Bayern München’s Hamit Altintop made his debut last Saturday against Cologne. A lot of injured players complicated Michael Skibbe’s work during the last weeks and will still do it for the upcoming match in our Westfalenstadion: Greek international striker Ioannis Amanatidis is injured after a knee surgery in November, midfielders Ümit Korkmaz and Zlatan Bajramovic (another former player of a Gelsenkirchen suburb club) will definitely not enter the green. 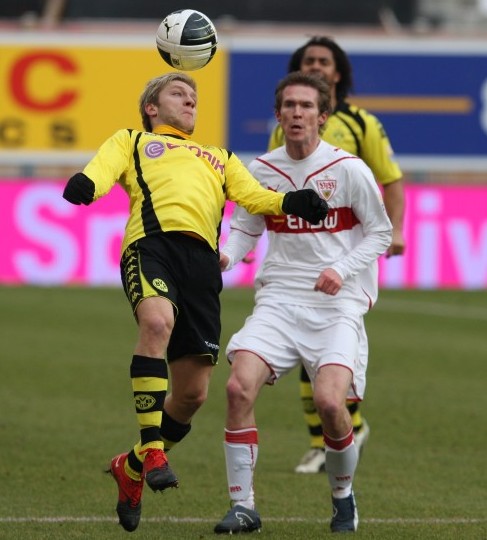 Also injuries and insecurities handicap Jürgen Klopp’s planning for the match on Sunday: Kuba, who left the game in Stuttgart after only 22 minutes is again struggling with groin problems, Felipe Santana twisted his ankle. So both will be doubtful against Eintracht Frankfurt. There’s hope that Sven Bender who was remarkably missed in Stuttgart will return into the team. Sven stopped training during the last week to rest and recover his injured knee. After he returned carefully to training he could be an option for Sunday. Again Marc Ziegler will replace our injured regular keeper Roman Weidenfeller. Roman’s come back match could be the game next week against Bayern in Munich. Tinga underwent a surgery in Brazil due to his ongoing groin problems and will not join the team for the next couple of weeks. Small ray of hope for Sebastian Kehl: Our defensive midfielder took part in training on Wednesday for the first time. One step closer to his personal target, returning on the green in March. And a big “welcome back” for Mohamed Zidan. After nearly five weeks with the Egyptian national team he arrived on Thursday in Dortmund. The Egypt team won the Africa Cup and Mohamed played an important role. Before the match we will see a special tribute to Mohamed. And no question – Mohamed played not only an important and successful role for Egypt, he did it also for Borussia. We all are waiting to see him back in black’n yellow, together with Lucas Barrios probably our strongest team for the offensive!

Let’s close this warm up report with the words of goalkeeper Marc Ziegler after the match in Stuttgart: “If we beat Frankfurt on Sunday the defeat in Stuttgart will be forgotten!” That’s absolutely right and there’s nothing more to be added!