Nothing To Write Home About 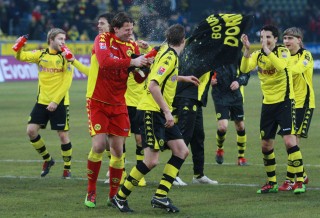 If you ever feel world weary when looking at the results, if you ever think your team’s not gonna make it through this year. Cheer up! It can get a lot worse. You might wanna compare your team to Hannover 96. The Lower-Saxons are unarguable the worst team this side of the year. Got idea to match them up with our lads this Saturday. We ended our three game losing streak and extended Hannover’s to eight games. The struggling 50+1 fighters have not won a match since the tragic passing of Robert Enke last year.

With Weidenfeller back in the starting XI there was no need for Klopp to change the rest of the line-up which had fought bravely against Bayern the week before. Even with a fifth booking for Sahin, Schmelzer and Barrios lurking around the corner and the big Derby in mind. Hannover brought back Balitsch and kept Fromolowitz in goal. During the week the slumping keeper looked set for a place on the bench, his substitute: Uwe Gospodarek, a 36year-old ex-pro that has just gotten back out of retirement. But Slomka (remember the 12th of May???) stuck with Fromlowitz, who would go on to become the man of the match for Hannover, while still conceding four. The first quarter of an hour saw Kuba run riot on his side. Poor boy Rausch never got used to the pace of the Polish international. But whatever Kuba did and whoever was there to tip in the ball, Fromlowitz was there to deny us the important first goal. Not much did happen after that quarter of an hour until Super Lucas jumped into the ball and into his opponent some ten minutes before half time. His fifth booking, he will sit out the Derby clash this Friday. Ref Lutz Wagner then awarded another card to Mats Hummels for something nobody was too sure of. Now half time was approaching rapidly, with the match still being locked at 0-0. While the fans stormed down for a wee pee and a quick half time Bratwurst Subotic finished a Sahin corner with his shoulder. The Hannover defense was nowhere to be seen, the near post not marked. Finally we were up by 1. And Wagner blew the whistle

When he ordered the teams onto the pitch again the 72.000 were already heating up for Friday chanting all the Scheiße tunes. And 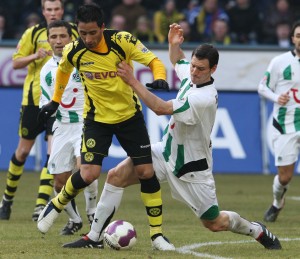 Hannover ensued. This one Subotic goal right before half time was enough to final turn this game into one way traffic. While attack over attack rolled into the Hannover box (in the end it would read 28 to 5 shots on goal for us) Weidenfeller turned around and chatted to some loyal ball boys, the stands sang their songs and Slomka’s face turned paler and paler. It was not before the 62th minute however that we scored the second goal. Hannover defender took advantage of an Owomoyela header to put the ball past Fromlowitz . This marked a record breaking fifth own goal for Hannover this season. Unforgettable the three own goals in their match vs Gladbach which also saw the beginning of a soap opera that right now entertains millions of football fans in Germany. Look out for a small report on the referee sex-scandal on these pages sometime soon. Jürgen Klopp, happily married with children, decided to make 2 substitutions right after this goal. Barrios and Zidan left the pitch for Hajnal and Valdez. It did not change the signals. Still Kuba was duracelling down the right side giving Fromlowitz some well deserved work. It was crystal clear that we would go on to score a few more and so did Valdez in the 77th. An Owomoyela shot was somehow deflected to give the Paraguayan World Cup hopeful a sitter. Borussia now fell asleep and Koune fought one back for Hannover with their first and last chance in the game. When Borussia woke up towards the end of the match local boy and Derby hero to be Kevin Großkreutz finished the game with a curler past Fromlowitz. 4-1. And the first win at home against Hannover in seven years. Boy, how time passes

Now it’s all eyes on Friday. When we should be able down the gap to Schalke to three points. 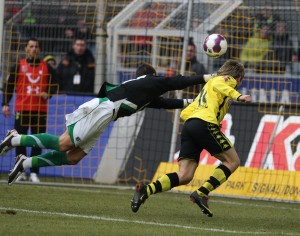