"Could Have Been More" 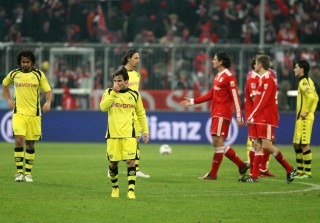 After having fought hard in Munich and even getting the lead after five minutes, our team was sent off the field with no points. It was the third loss in a row after having lost to Stuttgart and Frankfurt before. Of course, it is no shame to lose in Munich, but the way the match went is the reason why many supporters left the stadium with the feeling “There could have been more to gain.”

Keeper Roman Weidenfeller tried to get back in the team over the week, but finally stayed in Dortmund. He was, of course, replaced by Marc Ziegler. With Valdez out because of his fifth yellow card, it was appeasing to see that Kuba and Bender were able to play. Kuba replaced Valdez, while Bender’s place was again besides Nuri Sahin. The defense didn’t change in comparison to last week, Barrios as the sole forward was backed with Großkreutz, Zidan and Kuba.

Bayern Munich started up with so-called “Robbery”, Arjen Robben and Franck Ribery, who was back in the starting line-up for the first time since October 2009. 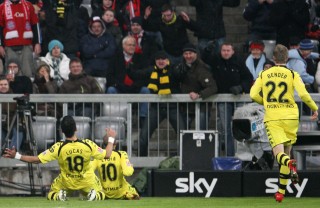 The match couldn’t have started better with Borussia pressing forward and gaining good chances to score. Bender nearly brought the lead with a shot from the right, but Demichelis (4th) saved the ball for beaten keeper Butt and one minute later, Bender’s header was cleared off the goal-line by van Bommel. After a fault of Van Buyten, African Cup Winner Mohamed Zidan gained the ball with great fighting spirit and scored with a mixture of shot and sliding tackle (5th). It was the third goal of Zidan during this season. After gaining the early lead in the first leg, Borussia again made the first step to victory and even had the possibility to double the score, but Großkreutz´ shot was blocked by Butt again – it wouldn’t be the last time the german keeper made the save for his team. On the other side of the field, Ziegler stopped Gomez (20th) and Müller (21st), whose shot was cleared at the expense of a corner kick. After this corner kick, van Bommel got the ball and his strong drive was deflected by Barrios, which made it harder but not impossible for Ziegler to react. However, Ziegler didn’t get his hands on the ball and van Bommel equalized (21st). Now BVB seemed to be shocked and Munich could have taken the lead by Ribery (26th) and Gomez (36th). Short before half-time, our team got a new awakening and Barrios could – perhaps must – score the 2-1. Though, he didn’t and the first half ended with a deserved tie. 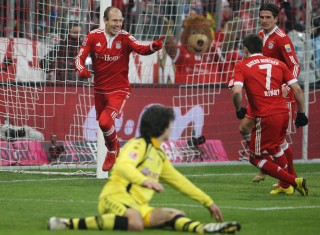 The second half didn’t start off well for our team, referee Knut Kircher didn’t see a clear foul by Demichelis which brought Munich possession, a quick pass to Ribery, who laid off for Robben and the strike for Munich. After 50 minutes, the new score was 2-1. Sahin and Barrios went for the equalizer but either missed the goal or were beaten by Butt again. The decision in minute 65 can again be questioned because of off-side, but Gomez didn’t care about it and doubled the lead for his team. Dortmund got an opportunity by Großkreutz at the end (78th), but again it was Butt who stood in the way. However, it could have come worse, but Gomez seemed to be too arrogant (84th) and Schweinsteiger’s header only hit the crossbar (85th). So at the end, it is an unfortunate defeat because of the referee’s decisions which could have been prevented by a better usage of our possibilities. Like I noticed earlier “There could have been more to gain”. Certainly, Borussia showed more effort compared to last week’s loss against Frankfurt. Next Sunday, we will be facing Hanover 96 who since the death of national keeper Robert Enke didn’t get a victory and were beaten by Bremen 5-1 this week. A must-win match-up because Bremen only is two points behind us and if you want to make it to Europe, you have to win those matches. After a win against Hanover, we can concentrate on the derby which now is only two weeks away. 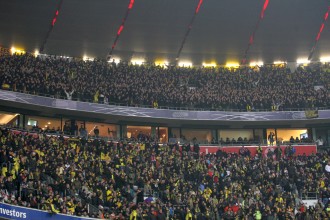