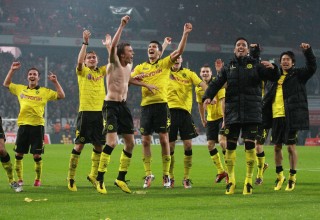 Inspired by the metropolis Paris and our next Europa-League opponent Paris St. Germain you won't get a usual warm-up report today. We will alternatively present you an poetic excursion.

Through heavy storms we went together,
tough were the times,
we thought we'd lose you for forever,
but you made it without grimes.

Twice you tried to qualify for Europe,
to represent our beautiful colors,
twice it ended in a blowup,
the winners were like crawlers.

But then one day in May,
you qualified again,
Agdam we used as ash tray,
and returned to Europe insane.

We visited the Ukraine next,
and won with unbelievable passion,
Lviv looked perplexed
and the Black and Yellows looked smashin'.

Seville won with the referees help,
Michael Dean you were our hero,
after your performance even the FIFA jerks would'nt yelp,
the points of the Spanish after the return match: zero!

Up next is the city of love,
we surely will give our best,
the football god looks on us from above,
Borussia Dortmund shall be blessed!

I dedicate this poem to you
Borussia Dortmund I love you!

Our next match will be today against Paris St. Germain, who currently lead our group with 6 points and 3-0 goals. Borussia will need to win the game conducted by Swedish ref Jonas Eriksson. But this game will not only be a big chance to make a huge step towards the round of the last 32, it will also be the comeback match of Dortmund legend Leonardo Dede. As we all remember, Mike Dean from Britain was kind enough to take care of this when sending off Marcel Schmelzer in the Seville match. It will be Dede's first appearance for the first team this season. Dede featured in BVB II’s win over Lotte this weekend, where he played for some 72 minutes, where he, according to our sg.com-editor web had problems adjusting to the game. But: Dede has 46 European Cup games under his belly, which makes him the most experienced player in our team by far. “Experience can help. But nothing is better than match practice. I will give my best. The team is on a run and will help me. I also hope the fans in the stadium will back me”, says the Dortmund idol and adds “Of course, I will be nervous. Having not played for five months, this however is pretty normal”. 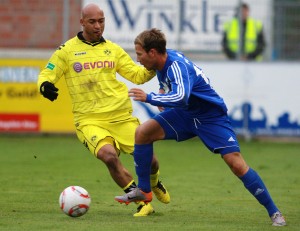 According to the local paper (Ruhrnachrichten) Paris St.Germain is interested in signing goalkeeper Roman Weidenfeller. The contract of the 30-years-old Weidenfeller, who is playing for Dortmund since 2002, expires at the end of the season. The advisor of Weidenfeller reported about an request but not about a definite offer. It is possible that Paris St. Germain tries to disturb the harmony around our young team. The conversations between the leadership of Borussia and Roman Weidenfeller about a new contract are already in progress. This action of Paris one day before the match against Borussia Dortmund outlines how this club understands the words Fair-Play.
Coach Jürgen Klopp said about Paris St. Germain: "This team doesn't only consist of players with melodious names but also it's a team that found its balance during the season.“ Furthermore he stated: "Paris is a team with great experience and great ambitions“. He expects a really tough match and explained how Dortmund will approach the match: "We need to play really consequent against this tactical well organised opponent.“