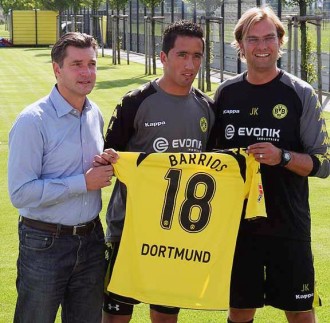 While some of the BVB supporters are still moaning about Alexander Frei's departure to FC Basel Michael Zorc didn't hesitate to present a new striker. Argentinean striker Lucas Barrios, called the panther, was signed from CSD Colo Colo of Santiago de Chile. The rumoured transfer fee is believed to be around 4.3 mio Euro.

But who is this 24 year old striker most of us haven't heard before? He is nothing less but the reigning world top striker of 2008! With an incredible 37 goals in 38 matches he outclassed even a giant like Klaas-Jan Huntelaar. He scored those goals mostly in the top flight league of Chile but scored also a couple of times in the Copa Libertadores, the South-American Champions League. He is known to be in the middle of the action and present when needed - some kind of Gerd Müller of modern times. His strong right-footed shot is surely his most dangerous weapon and by this way he scored most of his goals. There were also some left-footed ones, and few headers. And that is astonishing as he is 1.86 metres tall. But surprisingly his heading technique is not that good. Overall his technique is superb. He is even fast enough to fit to Jürgen Klopp's intense running game and counter attack tactics.

Barrios was born and grew up in San Fernando, North of Buenos Aires. His first major club was CA Huracán, where his youth coach thought that he was physically not able to play pro football. He then moved on to Argentinos Juniors, the legendary first club of Maradona. He helped them promote to the first division and then moved to Tigre, North of Buenos Aires. As that didn't work out, he went back to Argentinos Juniors, but there he was left on the bench several times. He got a call from a club from South of Chile called Temuco. There he found his scoring skills again. With new confidence he tried again an Argentinean club - Tiro Federal of Rosario. But once again, he didn't impress. And so he was back on his way to Chile to Calama, where he played for Cobreola. There he scored 26 goals in 39 matches. This time the impact was that great that FC Atlas of Guadalajara, Mexico made an offer. But as part of a never ending story he failed once again and scored only 1 goal in 14 matches. And for a third time he moved to Chile. This time to the capital city giants Colo Colo, former winner of the Copa Libertadores. And this was finally the club where he became the top striker of the world in 2008 with 36 goals in 37 matches. But as you see, he made quite a journey during the last couple of years.

He arrived in Germany last Saturday night and immediately joined team training the next day. Despite being quite tired he showed some of his skills even there. On Tuesday he even scored in his first test match against second division side Koblenz. A long pass by Owomoyela found him up and away. He saw that the Koblenz goalie rushed out of his goal and chipped the ball smoothly over his head into the empty goal - really a nice display.

By the way, he will have the shirt number 18, the mystic one that Lars Ricken wore in his pro days. And as the DFL approved he is allowed to wear his first name - Lucas - on his jersey.