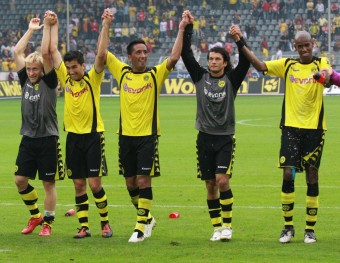 Borussia Dortmund earned their first three points with a solid 1-0 win over 1. FC Köln. Despite laying siege to the Cologne goal the black and yellow boys had to cope with a narrow result.

Scenario/Line up
BVB coach Jürgen Klopp had to compensate the missing of left back Dede and holding midfielder Sebastian Kehl. While Schmelzer replaced Dede, surprisingly Sahin moved back to holding midfield and Tinga took his position in left midfield. Up front Valdez was partnered by new signing Lucas Barrios.
Zvonimir Soldo chose a very defensive starting line-up. Injured top striker and Cologne idol Lukas Podolski - or Prince Lukas as he also called - was replaced by holding midfielder Maniche. The former Champions League winner with FC Porto was signed just some weeks ago and made his first match for Cologne.

First Half
Borussia started like they really wanted three points today. World top scorer of 2008 Lucas Barrios had his first approach in minute 5. A deflected ball found him waiting 25 metres on the left side. With a short sprint he outpaced the Cologne defender and fired a powerful shot from narrow angle. But that was only the first of several times during this match that Cologne keeper Mondragon should shine. Anyway Borussia was in control, while Cologne was waiting deep into their own half. Subotic made a second attempt for black-yellow in minute 15. Following a corner kick taken by Hajnal his header was saved by Mondragon directly on the goalline. While BVB's players were already celebrating referee Stark decided that the ball did not cross the line. At all the decision was ok as the replay showed. Fired by his first attempt Neven Subotic fired a free kick from nothing less that 30 metres direction goal. Again Mondragon needed his best skills to clear that one. Maybe the match would have taken a completely different turn if Mondragon would have done what he intended to do after half an hour. Just after clearing another ball he hold his thigh and signalled to the bench that he was injured and needed to be taken off the pitch. Strangely suddenly he was able to continue. And as Dortmund played it a little bit cooler during the last 15 minutes of the first half, his thigh seemed to recover. 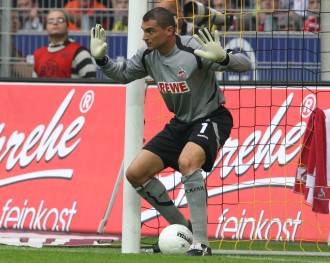 There were no substitutions on Borussia's side. Somehow the match looked a little bit like before the halftime break, but Borussia was putting in some more effort and really laid siege to Cologne' goals. And enourmous number of corner kicks rained down on Mondragon but the rock was still standing cool. In minute 54 Borussia had another 2 chances within seconds. The first one was a powerful shot from 12 metres fired by Nuri Sahin that was again brilliantly saved. The second one was a header by Valdez that nearly dropped into the right corner of the goal. But sometimes when you miss so many chances, somehow the other team manages to score. Just after one hour was played a long defensive cutting ball nearly found Maniche only 3 metres in front of an empty goal. Luckily he missed the ball by centimetres. In minute 66 Soldo substituted Marvin Matip and took Petit off the pitch. Maybe not really a sensation but combined with Borussia next approach worth mentioning. A free kick taken by Hajnal from the left side found TInga's head. The Brazilian midfielder deflected the ball slightly and by accident it hit Matip's leg and from there jumped into Cologne's goal - 1-0 BVB by an own goal! And if you expected that Cologne would initiate a furious last 15 minutes you were dead wrong. It was still only BVB. Zidan, who had replaced Valdez, had another two chances. His shot from 20 metres was a real task for Mondragon and a counter attack by him in the dying seconds was finished in a lousy way. So in the end Borussia left the pitch with a 1-0 win.

Summary
Really a nice performance by our boys. We controlled the match most of the time and created many chances. But our inefficency combined with Mondragon's marvellous performance created this narrow win. New signing Barrios was very agile, helped out in defence and had some chances but didn't score. Nonetheless it was a good start for him. Sahin made good impression as holding midfielder and Santana was our rock in central defence. 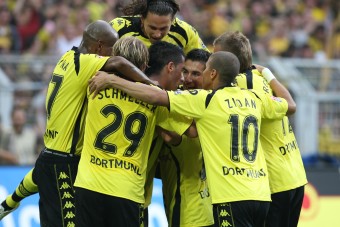 Voices
Jürgen Klopp: „I am happy that we played some nice football. We didn't become hectical and created several chances. Especially in he second half we were strong."

Zvonimir Soldo: „Dortmund earned these three points. We fought but lost the ball to early too often. Mondragon was outstanding today."