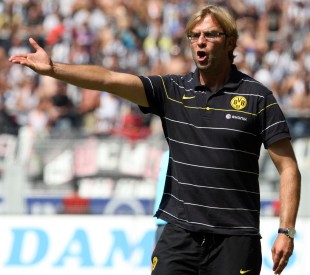 The last season ended just some weeks ago but we are heading into preparation for the new season this Sunday already. As usual the first training session will be held at mighty Westfalenstadion, where all the old and new players will show up. But who left, and who are the new guys? Schwatzgelb.com will give you a short overview.

Not there anymore
Markus Brzenska (25y): Brzenska as a home grown talent had some seasons with Borussia's first squad. But last summer there were just too many central defenders. Adding to Robert Kovac and Mats Hummels, Santana and Neven Subotic were signed. So Brzenska joined MSV Duisburg on a loan which expired this summer. He finally agreed terms with relegated Energie Cottbus and Borussia Dortmund got a small fee below half a million Euro.

Kevin-Prince Boaten (22y): The massively talented midifielder was on loan from Tottenham until this summer. Dortmund has a buyout option worth more than 5 mio Euro, but won't be willing and able to pay that kind of money. So it is very likely that Boateng, who moved from Herth BSC Berlin to England for 7.9 mio Euro in 2007, will be a Spur again by July.

Antonio Rukavina (25y): The tiny Serbian right back was signed just 18 months ago for 2,3 mio Euro. Back then it seemed the long search for a decent right back would finally have come to an end as he impressed in his first appearances. But when coach Jürgen Klopp arrived last summer he had other plans. Borussia opted for Owomoyela from Werder Bremen. As Owomoyela played a nice first leg of the last season there seemed no future for Rukavina in Dortmund and so he was loaned to TSV 1860 München last winter. As BVB was quite content with Owomoyela and as TSV 1860 found a real leader in Rukavina, plans emerged to keep the Serbian in Germany's south. As Munich is every now and then on the brink of bankruptcy the offered one half of the talented Bender twins.

New signings
Sven Bender (20y): Maybe one of the hottest prospects Germany's youth teams have to offer. Together with his twin brother Lars he went through every German youth national team. Lars already signed with Bayer Leverkusen for 2010 but Sven was still on the market. And as home club TSV 1860 München wanted our right back Antonio Rukavina a swap deal was arranged finally. No money was transferred initially. Only some bonuses depending on how both players perform with their new team. Sven Bender can play as holding midfielder or central defenden.

Dimitar Rangelov (26y): Maybe the most surprising signing. Rangelov was just relegated with Energie Cottbus but had a buyout option worth about 1 million Euro. He scored 9 times for Cottbus last season. Not too many goals, but with a relegation side not too bad at all. So some teams were in chase of him. He is a fast striker capable of playing counter attacks and thus perfectly fitting.

Markus Feulner (27y): A former Bayern youth member he played with the like of Misimovic and Lahm back then. He was with 1. FC Köln and then joined FSV Mainz where he stayed a couple of season. He started as a left midfielder but found his perfect position last season when he moved to holding midfield. There he played a sensational season and scored and assisted like crazy. He joined BVB on a free transfer.

Kevin Großkreutz (20y): A 20 year old player who played in Ahlen last season. Most of the time he was used as a striker but played also as attacking midfielder. He scored a couple of goals during last season in 2. Bundesliga and joins also on a free transfer.