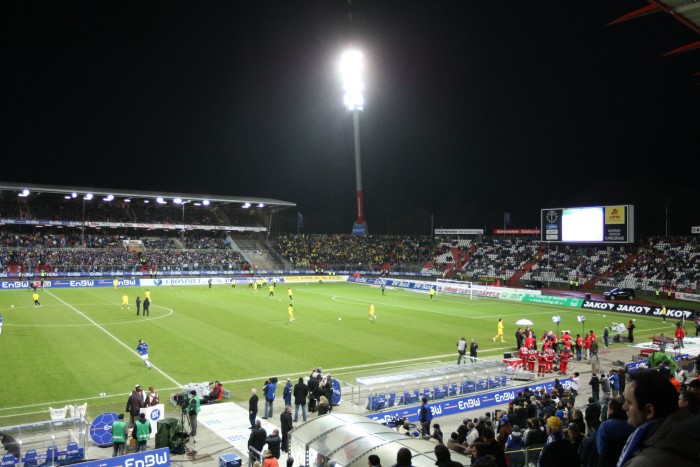 Some fans were wondering whether Borussia Dortmund would be able to turn things around and finally start winning again. In a match, that was decided in the first 45 minutes already, BVB a good performance.

Borussia's coach Jürgen Klopp had to deal with injured Dede and Bender. They were replaced by Schmelzer and Santana. Up front Barrios and Zidan made up our offense, whole Hajnal to back the playmaker position.

The match started big style. Already in minute 3 a fine pass by Nuri Sahon found Zidan down the middle. With a elegant dribbling he passed KSC goalie Miller and scored from 12 metres - 1-0 BVB! And it was only BVB during this period. Borussia played a nice pressing and gave Karlsruhe no time and space to breathe. Zidan had another approach in minute 16 that went wide. But only 6 minutes later holding midfielder Mats Hummels tanked through KSC's defense and still had the power to play a fine pass to the middle of th box, where Lucas Barrios was waiting. Barrios didn't shoot immediately but went past Miller and scored into the empty goal - 2-0 BVB! That was more or less the early decision. Borussia now took away some of the pressure while Karlsruhe wasn't able to create any kind of danger. So The Westphalian side went into halftime break with a deserved lead by 2 goals.

It seemed like KSC coach Markus Schupp told his team that he wasn't satisfied and that there still was a chance to survive this cup round. Only 2 minutes into the secon half a cut-in by Iashvili nearly found Finish KSC striker Tarvajärvi. Borrusia was lucky as he missed the ball by centimetres. And while some fans were already thinking back to those many games where we wasted early leads, it was again Barrios who scored! A superb high pass from the left side by Tamas Hajnal found Barrios waiting in front of Miller's goal. With a brilliant header he left the KSC goalie really no chance to save - 3-0 BVB! And at least at that point the home side realized that this match was over. BVB had still more ball possesion but didn't create that many chance anymore. And so in the end Borussia Dortmund scored an easy 3-0 win and promote to the next DFB cup round.