Borussia vs. Hamburger SV - five wins on the trot? 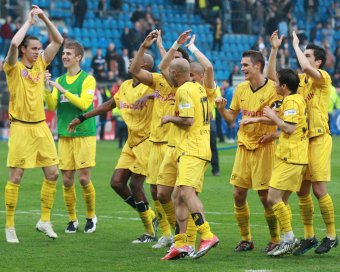 Bremen, Berlin, Cologne, Bochum - the 4 stations of Borussia's serial of wins during the last weeks! Will this serial continue on Saturday against Hamburger SV in our Westfalenstadion?

A forecast is difficult! Hamburg is currently number 3 in the table and without a doubt a top team of the current season. Also not to forget Hamburger SV is the only club playing in Germany's first league since its foundation in 1963. And for the team from the North the near future looks still promising! In spite of their defeat against Bremen in DFB cup semi final (2:4 in penalty shoot out) on Wednesday they still have their fingers in two pies! In the Bundesliga, HSV is still in the race for championship and in UEFA Cup the next two matches in semi final will be again vs. Bremen.

There are two main reasons for HSV playing such a successful season. First is that coach Martin Jol as the successor of his Dutch compatriot Huub Stevens did a good job up to now. Most of all the experts didn't know much about him when he entered the German football scene. But former coach of Tottenham overcome all hurdles during his first year in Hamburg. Leavings of Rafael van der Vaart to Real Madrid or Nigel de Jong to Manchester City could be compensated without a big loss in quality. Beyond that Jol's settled character in interviews and his objective style to analyse and comment Hamburg's matches or the club's perspectives confirmed his image: A serious, sometimes unemotional, but highly creative coach.

But what is a serious working coach without a proper team? In Hamburg this is definitely not the question! And that's reason # 2 for Hamburg's success story during this season. HSV's squad is well above the league's average and includes excellent footballers. For many HSV supporters the current team is quite comparable to the great HSV teams from 1978 - 1984 when Hamburg won the German championship for three times. 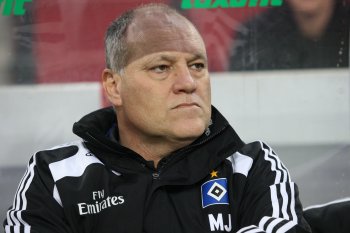 Goalkeeper Frank Rost improved his situation very much when he changed from the Gelsenkirchen suburb team Sch...e to Hamburg. Aged 35 years he's still one of the best keepers in the league. Defender Guy Demel is well known to most of BVB fans. From 2001 until 2005 he had worn the Borussia tricot. Other defenders are Danish/Dutch internationals Michael Gravgaard/Joris Mathijsen and German international Marcell Jansen. It's uncertain if we will see a duell brother to brother on Saturday: Jerome Boateng is the brother of Borussia's midfielder Kevin Prince Boateng. Jerome was injured in the cup match on Wednesday and it's not finally sure if he will be able to play. Centrepiece in Hamburg's team are the club's midfielders and strikers. Jarolim, Pitroipa, Olic, Guerrero and Trochowski are excellent international players always with a good nose for a goal. Croatian Ivica Olic will leave Hamburg at the end of this season and has signed a contract with Bayern Munich. Sadly or more fortunately for Borussia (?) former BVB striker Mladen Petric will not be part of HSV's team on Saturday. He was injured in semi cup final and will not be able to join his team for 2 or 3 weeks.

For Borussia the situation looks more comfortable. It seems that BVB coach Jürgen Klopp will be spoilt for choice. With the exception of Young-Pyo Lee (still struggling with tendon problems) and Mats Hummels (ligament rupture) all team members are able to play on Saturday. Good news regarding Nelson Valdez. After his excellent performance with a spectacular goal in Bochum he has extended his contract until 2012. A good decision for Nelson and the club and a good starting base for him to continue with more goals and assists for Borussia in the future.

So, regarding Borussia's team all sounds pretty good before Saturday's match. Important is also an announcement of the UEFA that it's necessary for Borussia to reach position 5 to qualify for the European league. Only when Hamburg would have been the winner of the DFB cup, the team in position 6 would be qualified for the Uefa Europe league. But for Hamburg the dream of a cup final in Berlin is over now and also for Borussia all speculations about a possible position 6 at the end of the season. It will be a hard job to win against Hamburg but it's not intractable! All calculations about the possible results of other teams this weekend are more or less paper waste. If Borussia will win but also the teams above - nothing will remarkable change. So the best is to think like Dede who closed an interview after our win in Bochum: "We want to enjoy the moment but want to take each game as it comes and see where we end up at the end of the season:"

And no question, if Borussia would be on position 5 at the end of the season we all would enjoy a very long moment!