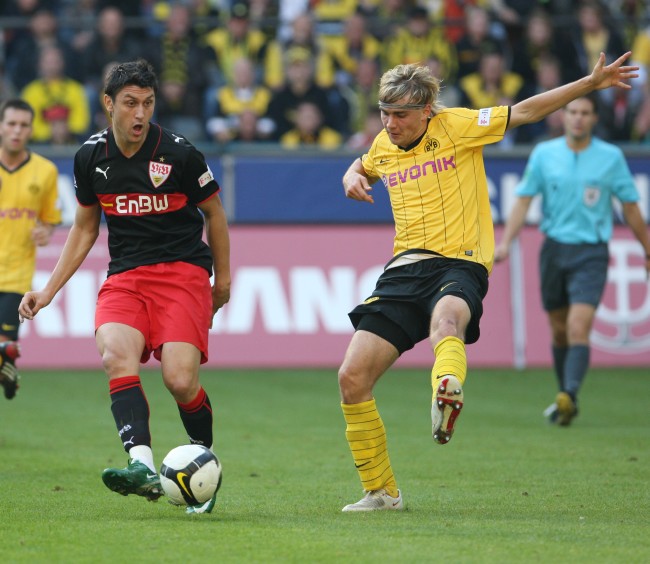 A first remark for introduction: Don't let us look back too long on last Saturday in Hamburg! Please let us all see it this way: The team which lost 1:4 in Hamburg wasn't Borussia! Or better: that black'n yellow team last weekend in Hamburg wasn't our BVB who brought us so much joy and enthusiasm during the last season. And the only way to forget this terrible weekend is a successful match against VFB Stuttgart in Europe's stadium with the best atmosphere: In Dortmund's Westfalenstadion!

The starting position for both clubs on third matchday is similar. Each team with 3 points, one win, one defeat, in the middle of the table. Also both teams had a match during this week. Stuttgart won 2:0 against Romanian team FC Timisoara in the qualification for the Champions league and Borussia lost its friendly against Real Madrid 0:5.

For VFB Stuttgart, last German champion 2007, it's now the first season without successful striker Mario Gomez (21 goals in 2008/2009). The German international left the club for a record amount of 35 Mio Euro and switched to Bayern München. His successor, Russian striker Pavel Progrebnjak from Zenit St. Petersburg signed for VFB Stuttgart in the beginning of this month. Something like a small sensation was the return of Aliaksandr Hleb from Barcelona to Stuttgart. Hleb previously played for VFB from 2000 until 2005 and was during these 5 years one of the best midfielders of the Bundesliga. Together with Brazilian Elson and German international "The hammer" Thomas Hitzlsperger Stuttgart's midfield is for sure one of the most effective in the league. It's redundant to discuss about the qualities of VFB's and Ex-BVB goalkeeper Jens Lehmann. Let's be curious about his (possible) last match in our Westfalenstadion. In interviews he announced his very likely retirement at the end of current season. In Stuttgart's squad we also find another name, very popular for BVB fans: Alessandro Riedle, the son of former BVB striker Karl Heinz Riedle, who joined VFB Stuttgart this summer and signed a contract for two years.

For Borussia we have one big desire: Let's all hope that the match in Hamburg was definitely a faux pas in the beginning. In consideration of Borussia's friendly against Ronaldo & Co. on Wednesday, Borussia conceded nine goals within five days. Jürgen Klopp's comment about this annoying result gives us hope for the match against Stuttgart: "We know what aspects of our game we have to work on." All who watched the match in Hamburg (The Spanish "giants" from Madrid are definitely another level) know what this means: Not to allow so much space for the opposing team and especially a remarkably improved defensive and midfield. Maybe 18 years old Julian Koch who made his promising debut against Madrid could be an alternative. Also the presumably return of Leonardo Dede would enlarge effectiveness in Borussia's tactics and play. It's unlucky that Sebastian Kehl will not return on Saturday due to his adductor injury. Jürgen Klopp mentioned that it will be too early for him to play on Saturday. "We are building him up slowly and he is gradually doing more and more", the coach mentioned on Borussia's official website. Also new midfielder Markus Feulner will not join the team. The new arrival from Mainz is in struggle with a flu infection.

For chroniclers or superstitious people:
In the beginning of last season Borussia also lost one away game 1:4. It was the defeat in Hoffenheim, with a poor performance of our team, comparable to our match last Saturday in Hamburg. The following match last year in our Westfalenstadion, Borussia won 3:0. And which team was our counterpart? It was VFB Stuttgart! No objection from our side, if history will replicate on Saturday!