This is a headline filled with joy and happyness 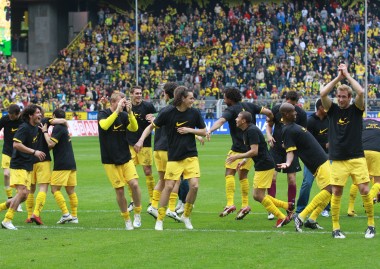 It is hard to sum up the excitement and the euphoria that swashed through the Westfalenstadion like a wave, after we had sent Bielefeld home with a 6:0 in our bags.However, it was not only our victory that had caused this euphoria, no, on this day we sent a huge "thank you" to Hamburg. For Hamburg? No. Of course not, well, yes, party as well, for not being able to score, but more for Cologne, who had managed to win the game against Hamburg and therefore helped us to regain place 5 in the chart.

The very same as usual, what can I say...Again, Jürgen Klopp decided to send the same squad on the field as in the games before. Hummels (injury) as well as Boateng (red card) were missing. Bielefeld's coach had to change his formation on three positions due to injuries and a red card. Mijatovic, Bollmann and Marx were had to pass. For them Herzig, Munteanu and Schuler stood in. 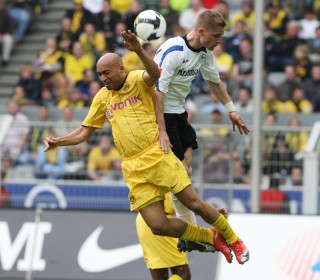 Well, the first half, or let's say the first 40 minutes of the first half, might as well be erased. In the first 40 minutes, Dortmund did not really find their way into the game. Bielefeld stood deep and detained Dortmund from evolving a quick game in the center of the field. Kuba, as well as Sahin and Hajnal were constantly doubled and had a hard time striving through Bielefelds defense. After nine minutes of the game Bielefeld had developed their first huge chance with big help from Sebastian Kehl. Munteanu failed to get the ball past Weidenfeller from very short distance. In the 9th minute another plot took place on the Südtribüne, where Dortmunds fans said good bye to Marion, a The Unity member, who had died the previous week in an accident. The sad "you'll never walk alone" will hopefully find its way to her and her family. Rest in peace. After that Bielefeld withdrew themselves into their own half, giving Dortmund a hard time getting through. Kehl's header in the 25th minute did not lead anywhere. In the 35th minute of the game, it was again Bielefeld how was very close to scoring. Weidenfeller though managed to scupper Kirchs chance with a great save. Up to this point it can actually be said that we were very lucky. But football writes its own stories and so the football god or whoever is up there, decided to take revenge on Bielefeld for not using their chances. In the 43rd minute of the game Frei's freekick found its way on Kehls head. 1:0 for us. Halftime. Our hopes lay in Jürgen Klopp, that he would hopefully find the right words to incite our players to play a better second half.

And he must have found the right words. What happened in the second half was nowhere close to what Borussia showed in the first half. The second half stood under the motto: Everybody may. In the 57th minute of the game, Kuba, who was now better in the game, passed the ball to Valdez, who passed it on into the middle, where Frei and Hajnal were waiting. Hajnal was a step quicker and completed the nice teamwork by scoring. 2:0 for us. Yeeha. Bielefeld had given up. Only 12 minutes 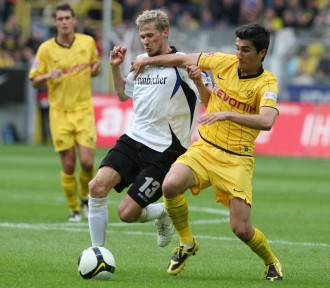 later it was again Kuba after getting the ball from Frei, who ran away from Schuler, passing the ball into the middle, where Valdez was eagerly waiting. 3:0 for us. Great. More please. With this goal, Valdez offered a gread goodbye, making room for Zidan. And look! Only three minutes later it is again Kehl who scores the 4:0. After Kuba had failed to get the ball into the gall, Zidan played the ball back to the penalty area border, where Kehl stood, only in order to kick the ball straight into the goal.
Was Bielefeld actually still playing? There was no sign of defense or offense from them, whatsoever. And so Borussia could continue to play lively. In the 84th minute, Dede passed the ball into the penalty area, after a nice give and go pass with Kringe, where Tinga awaited the ball in order to score the 5:0 with his head. The game was still going and only three minutes later also Zidan was allowed to score another goal 6:0.

What had started so difficult, so stiffly, so slowly, so "driving you nuts-ly" had developed into fireworks of goals. For Bielefeld this 6:0 meant another step into the 2. league. For Dortmund, it meant another step into the direction of the Europe Cup. The only bitter pill on this day? Neven Subotic got his 5th yellow card and will be missing next Saturday in the game against the false Borussia from Gladbach.
The nerve-racking waiting suspense for the score from Hamburg actually let a few of Dortmunds fans get closer to a heart attack, me included. Everywhere I looked there were people talking into their mobile phones, having earplugs on, listening to the radio. Everywhere people were waiting for the secure message that Cologne had defeated Hamburg. But in Hamburg, the game went 6 minutes longer. Terrible suspense. Then finally the redeeming announcement: in Hamburg the game was over. Cologne had won.
Personally, I live in Colo 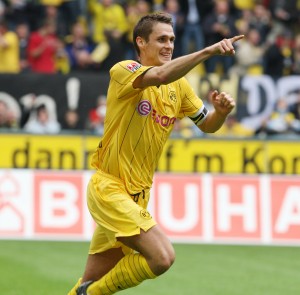 gne, and I have never been so happy and so in love with this city as on this day.
It was a worthy last game in the Westfalenstadion. At least for this season. In about three months we will hopefully continue where we have stopped this weekend.
For next week, it is all given in our hands. A victory and the participation in the Europe Cup is definite. Let's do our best and support our team and I am sure they will do their best to make us happy. Thank you Dortmund, already, for this wonderful season.

No grades on this day from my side. Yes, the first half was terrible, but in the second half, we were a team and a team does not need to be graded seperatly.