Dede after the match BVB ? Real Madrid: ?The atmosphere has to be like in this stadium.? 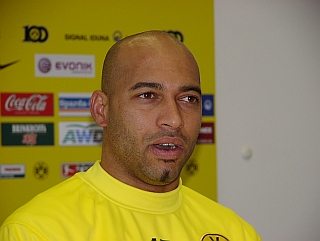 In the second part of the interview with schwatzgelb.de Dede talks about his injury, thoughts about leaving Borussia, Brasilian players at BVB, his relation to the supporters and the impressions he and his friends from Brazil have of Westfalenstadion.

schwatzgelb.de: Leonardo, did you stay for a longer period in Brazil during your injury?

Dede: I was there for two and a half months, the rest I was here in Germany. I was there during the first 8 weeks when I wasn't able to do anything. And of course for Christmas. Inbetween I worked hard here in Germany, to recover as soon as possible.

schwatzgelb.de: How hard was it for you to stay away from pitch?

It was really hard. When I was in Brazil, I watched the derby against Sch*lke in TV. That was brutal. I can not enjoy football on TV. That's nothing for me, I am suffering too much. The whole day is done then. In that case it is far better to turn of all electronic devices even the radio and read the result after the final whistle. But thanks to God this time is over now. The team played well during my injury. Also my two colleague on the left back position impressed. But that is good for the club at all. The team is doing well on every position. My goal for now is to climb the table with Borussia. Up there where we belonged when I arrived in Dortmund. That means international matches.

schwatzgelb.de: Back then we had many Brazilians in the team. Did you miss them?

Yes, Ewerthon, Evanilson, I miss them a lot and I still have a good relationship with them.

Lincoln is like my brother. We just phoned this morning. He really would like to play for Borussia (sceptic gazes). Yes, he really told me. He knows exactly what this club means for me and often mentions that we need to play in the same club one day. I could follow him to Turkey, but I think I won't do that (laughs).
When all the Brazilians had left Dortmund, that was like a shock for me. Of course I am able to communicate with every player in the squad and doesn't have any problems with the language, not with the coach and not with the physiotherapists. When I went into the cabin back then, it was really quite. With the Brazilian it was always noisy and we laughed a lot. That was still during Matthias Sammer's time with BVB. Of course he was a little bit angry sometimes and told us that we should be quieter. But those guys brought a positive atmosphere to the cabin that we transported onto the pitch. Then the all left and I was alone again. But it was not as hard as in my first year. 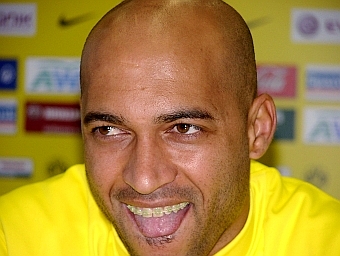 schwatzgelb.de: We are celebrating our 100th anniversary this year, as you know. And we are really interested how the players notice our long club history. Did you or the whole team ever visit the Borusseum to get to know how things were back then?

Press relation officer Josef Schneck interrupts us: We are already planning to visit the Borusseum together with the whole team. But during these weeks it is a little bit difficult as many players are away with their national teams. But we will surely do that. The history of Borussia Dortmund is described so lively that Dede and his colleagues will have fun

schwatzgelb.de: You just mentioned Matthias Sammer. The readers of a Dortmund newspaper voted you into Borussia's team of the century, together with Sammer, Jürgen Kohler and Julio Cesar. Is that important for you?

That is one of the best things that ever happened to me since I am here in Dortmund. All in all I am now 11 years with the same club. There aren't many players who achieved that in Dortmund. I didn't play on top level all the time, but I always gave 100% and went for every ball. That is how I am. And so I am really happy that the fans noticed that. I didn't earned that by giving interviews or with TV ads. I earned that on the pitch. Even when I was injured, I tried to play and told the coach: "I am here, still having some pain but willing to help the team." The fans know that. And even off the pitch I was doing well with everybody. With the club, the supporters. The vote is an appreciation for what I did for Borussia during the last years. I am absolutely thrilled about that.

schwatzgelb.de: We people in Dortmund should also be thankful, that you stayed with us all the years. Regarding the last offer, the decision was in the end not up to you. How did deal with Borussia's denying of Roma's transfer bid.

That was not that easy for me. It is like with journalist or people working in a bank. Of course you are always looking for an improvement or a better deal with another company. Those other people notice that you are doing a good job and think: "I need someone like that guy in my team". Many thoughts are going through your head in a situation like that, when you are able to improve your finances massively. It was already not easy when Galatasaray made an offer some years ago. But with Roma I was not sure what to do. That was much harder. 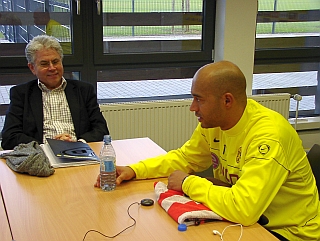 schwatzgelb.de: You wanted to join Roma.

You can't say that at all. When a player tells his club he wants to leave 100%, it doesn't make sense to keep him no matter what. In the end the club has to take the offer as the player is with his heart somewhere else. But that was not the case with me. Of course Italy is a superb country and Roma a big club. But even my family wanted my to stay in Dortmund because I was half my life here and the club means so much to me. Especially my father told me that I might earn more money, but that I would be just a player among many. But they left the decision up to me. In the end I passed on the extra money and Champions League. I am proud to be a Borussia Dortmund player. And the club an its supporters are giving me so much.

schwatzgelb.de: Were there other players, who told you, that you must be nuts to stay in Dortmund?

Sometimes they are joking: „Dede, you are now so long here in Dortmund, 8 years. What are you still doing here?" But that doesn't matter. They have to understand that I experienced so much in in Dortmund - good times and bad times. That is what counts. Looking back I am happy that I made the right decision. And it was my decision.

Realtively? I am very happy.

schwatzgelb.de: At the end of this interview let us have a closer look on the relationship between team and supporters: How is it when you play away. Do you notice how many fans travel with Borussia and how much money and time they invest? Do you talk about things like these within the team and how does it affect you?

As you know I play for this club a couple of years now. I told Santana and Tinga that they should for example in Wolfsburg have a closer look onto the stands and realize how much more crowd we bring with us compared to other teams. Every away match I played our away section was stuffed. It doesn't matter whether it was Duisburg or Bochum, even on long distance trips like Rostock. When I watch teams like HSV play there, I often think: "Hey look, how empty it is."
Our fans follow us everywhere. We are never just 11 players, we always have the twelth player on the stands. They really help us. I notice that since 6 or 7 years now. It is the same all the time. Even before kick off we talk about that fact, even the coach. Then we are really eager to give our best for those guys out there as a little payback. Every player thinks like that.

Josef Schneck: Even the coach is surprised every time again, when he hears how many supporters accompany us for away match. Even for him it is special. For nearly every match we use the full away section ticket allocation and even more. Hanover i.e. was gigantic. That really gives me the creeps.

Dede: That's right, that is the truth. How many matches I've watched, when some other team played there. The stadium was half empty very often. But Borussia is still a big number and that draws the people onto the stands. It is somehow like a religion. 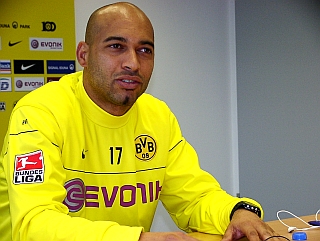 Josef Schneck: I remember when BVB, a small club back then, had there first away match after promotion back to Bundesliga. We played in Hamburg, reigning cup winner. It must have been 30.000 Dortmund supporters, the whole highway A1 was black-yellow. 30.000! And then we won surprisingly 4:3. That was unbelievable.

Dede: When Thomas Doll joined us, it was the same. He was fascinated by the fans and atmosphere within the stadium. This stadium...When we played Real Madrid in Champions League even Ronaldo and Roberto Carlos asked me: "What's going on here? This atmosphere!" Ewerthon and Amoroso were there, too, when we talk about it. Everyone agreed that the atmosphere should be like in this stadium. That is something that grew over the years. You can't get there with a brand new stadium like Bayern Munich have. Westfalenstadion, now called Signal-Iduna-Park, has something of both aspects. Modern facilities and old stands and walls. It is like back then and didn't suffer from the redevelopments.

schwatzgelb.de: Were there moments in all you seasons with Borussia when you were disappointed about the fans?

(needs a moment of thinking about it) No. When people criticized us, we really deserved it. Ok, it was a new experience for me in Stuttgart. We had a long record without any win and the supporters blocked the way of our bus, so that we were stuck within the stadium. I left the bus and didn't realize what was going on. Even the other players asked me. It was just that the fans wanted to talk to us. If something like that happens in Brazil things don't work the same. Nobody leaves the bus. I played for 2 years in Brazil and luckily I was doing pretty well. I had colleagues who got their cars damaged after the match. In Brazil the fans are of another kind. In Germany, not only in Dortmund, there are limits. People whistled, shout or yell, but they don't attack you. In Brazil there are no such limits.
People here pay for their tickets. So the players should understand that they sometimes yell and shout. I really can't remember any too harsh verbal attacks in all those years. But all of our opponents are afraid of Dortmund. We talk in cabin about that and everybody says that as an away team you should go for an draw till halftime, so that the fans become nervous and start to whistle. But I don't experience that often. No, all in all I don't recall any negative moments.

schwatzgelb.de:Leonado, thank you for the interview. We wish you some more successful years here in Dortmund!

The Interview was held by Christian Siejak, Peter Hausmann and Mathias Vetter.

Part 1 of the Interview