Quiet Assembly of the supporters

At 8 pm Götz Vollmann welcomed around 100 present members of the supporters department. First topic point was the report of the past year. Götz described the changed policy of the management board. The managers does not - unlike last year - commend the situation around the team and the players. Also the cooperation with sponsors is significantly reduced. The agreements with Warsteiner and Evonik have been cancelled. There is however an advice agreement with new sponsor Brinkhoffs. Brinkhoffs consults the supporters when they plan advertising measures. As a reward the brewery from time to time donates a few crates of beer and other drinks for supporters activities. Afterwards Götz discussed the derby march last September. He pointed out the good cooperation between supporters, the unity, the police, the city of Dortmund and the club. He mentioned that the police was impressed by the good organisation and discipline in the front part of the march. Unfortunately in the back of the crowd some idiots rampaged cars and buildings. Thus the management of the supports sees no possibility to re-enact a derby march. The city of Dortmund and the KGaA wouldn’t give their consent.

Accordingly Götz talked about the special trains. All in all the trains were a success. Especially the tours to the cup final in Berlin and the match in Udine were unique experience. Regarding unacceptable manners for the following voyages bottles out of glass will be forbidden. Paramedics will insure the health of the passenger. That beeing required because of the strange drinking habits of a few of the mainly younger fans during those journey. This also fuels the damage of interior of the train. Which is quite a problem for itself. The supports have to pay a notably amount of money for reparation. It was agreed upon to install a group to plan future voyages. Everybody is invited to take part in this group.
Next topics were the summer party and the Borusseum. The summer party was a new experience because it was on the same time as one of the matches (First round cup clash against RW Essen). The public viewing in the Westfalenstadion was very popular. Sadly the other activities were not that popular with the fans. Then Götz explained the role of the supports as creative directors and advisors.

The 100th birthday of Borussia Dortmund was a topic, too. The supporters lobbies for events which are affordable for all fans. A big concert is planned and a truck during Dortmund carnival in late Feb. It was mentioned that from coming season onwards member of Borussia will be preferred in the selection for season tickets. This making a big difference for our stands.

The longest discussed topic was the derby. After the last derby a meeting between the supporters of Dortmund, Schalke and the police was held. During this meeting the police confirmed that violence between the fans is increasing. Due to this fact the police is changing their tactic. It seems like the police is aiming to control the travels of guest supporters. The supporters of Schlake will loose the jester’s license in Dortmund. For the up and coming derby in the forbidden city there were however no information available.

Next up: Daniel Nowara presented the income statement of the supporters. The supporters made a profit of 5663.34 € in the passed accounting year. The turnover and the expenditures decrease in the same amount. That is generate by less trains organised by the supporters. Since this year the supporters get their own budget of 20000 €. It is planned to use it as reserve and to support regulars’ tables all over Germany.

Afterwards the members discharge the management. By two abstinences and no votings against the discharge the result was a reward for the quiet and efficient work.

The last point was the free discussion. One member requested a fan assembly before a general assembly of the whole club. The management promised to host one shortly before. One member criticised the fan board. This problem is known by the management and on the current to-do list. Controversial discussed was The Unity's sound machine. Björn Beil promoted for appreciation and patience with the precentors. This topic should be discussed later in an extra meeting where more members of The Unity are present. 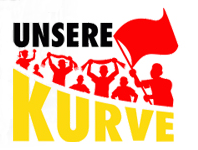 In the end Fenna and Markus presented two new projects. Fenna talked about the regulars’ tables and the organisation. She hopes that more people like to organise these meetings in their areas. Everybody who is interested can contact the supporters for supervising. So don't be shy and start one of your own wherever you are. Markus introduced the supporters union “Unsere Kurve”. These union fights for more transparent and fair procedure when someone gets banned from the football grounds of the first four leagues. Currently “Unsere Kurve” started to work on general rules for the fans in the grounds. That should help to relax the situation between guest supporters and the home security.

After that presentation Götz closed the official assembly. All in all it was a quiet and constructive assembly.