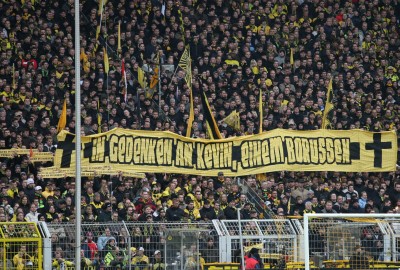 The return leg kicks off and people in and around Borussia Dortmund have mixed feelings about Saturday's result. After a promising first half, which saw BVB leading by one goal, the second 45 minutes were totally dominated by Bayer Leverkusen. In the end the black-yellows were happy to avoid a home defeat.

Scenario/Line up
Jürgen Klopp and his boys had to recover mentally from Wednesday's DFB cup exit at home against Werder Bremen. As we shall see later, this match was more or less a carbon copy of Wednesday. Jürgen Klopp had to do some changes. Owomoyela had recovered from a flu and started as right back, so that Lee moved to the left side, while Schmelzer was left on the bench. Up front Tamas Hajnal had to miss this match due to suspension. Young Turkish starlet Nuri Sahin took his place. Once again BVB's new signing Kevin-Prince Boateng started in right midfield. Alexander Frei and Mohamed Zidan made up our offense.

Bayer Leverkusen's coach Bruno Labbadia had more coices. In fact he could line up exactly the same 11 players that destroyed Cottbus in DFB cup midweek. So Henrique was still missing in central defense. 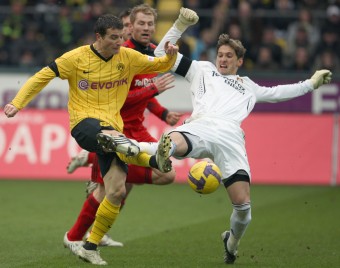 First Half
Just before kick off, the whole stadium stood up to commemorate a BVB supporter, who died Wednesday just before kick off. The 21y old boy fell from a stair rail and dropped 7 metres with his head onto concrete. The emergency unit could do anything for him. He died on the way to hospital. That was a really shocking moment for the whole BVB family. Many fans laid down scarves and candles where the young lad died.

Still there was football to be played and the match had a promising start. Nonetheless Bayer Leverkusen were the first ones to create any danger. A nice run down midfield by Brazilian wizard Renato Augusto was still not really a threat, but only seconds later Leverkusen's top scorer, Patrick Helmes got into position and fired a heavy shot. BVB goalie Roman Weidenfeller needed all his talent to clear this rocket. In minute 11 Borussia got his first chance. A corner kick by Alexander Frei found Kringe's head and then Owomoyela. But that was still no task for Leverkusen's national keeper Rene Adler. Borussia was surely the better team during this period of the match, but weren't able to create real domination. Already in minute 15 Helmes had another approach from 11 metres, which was wide. Dortmund reacted big style. A fine long pass by Brazilian Tinga found Alexander Frei up and away face to face with Rene Adler. The Bayer goalie reacted quickly and stormed out of his goal. Frei managed to play the ball past Adler, was brought down by Adler and finally missed the goal. Referee Meyer made his first mistake of the match and didn't give a free kick to Dortmund and a deserved yellow card to Adler. From then on both teams were able to destroy any creative game play of the other team without creating own dominance. It took until minute 31 until the next arouser. Vidal brought down Lee on the left wing with a sliding tackle - deserved yellow card! And really, how stupid can someone be? Not 60 seconds later Vidal with a horrible tackle against Tinga, which was another yellow card at least. Florian Meyer denied a card. This controversy decision left Vidal on the pitch. Borussia Dortmund reacted in style. Owomoyela tanked down the right side and played a nice one-two with Boateng. Our right back lost the ball to a Leverkusen player but didn't gave up. He managed to block Sinkiewicz' long pass. The ball was deflected direction goal, where Alexander Frei waited and headed the ball right into the net - 1-0 for Borussia Dortmund! BVB had to survive a last minute chance by Helmes but managed to get into halftime with this narrow lead. 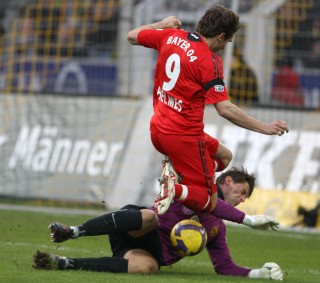 Second half
The beginning of the second half saw a different match. Bayer Leverkusen had now much more ball possession and pushed the black-yellows back to their own half. Though Frei had another nice header approach, it was Bayer Leverkusen all over the place. And this dominance paid off early in second half. Tranquilo Barnetta got the ball on Leverkusen's left wing, where he dribbled past Owomoyela easily. His sharp, low cut-in found Helmes waiting 12 metres in front of BVB's goal. The deadly striker had no problem hitting the goal - 1-1!

And to make things even worse only 4 minutes later Leverkusen nearly took the lead. Roman Weidenfeller with a fine save against Helmes that was deflected to Barnetta. The young Swiss national fired a shot direction goal, which was cleared by Owomoyela on the goalline. And only 6 minutes later in minute 73 Barnetta waisted another fine chance. His shot from half left position was half a metre wide. During this period Borussia Dortmund wasn't able to react. Every ball that was won in defense was cleared in kick-and-rush-style and so lost. In minute 80 Kadlec initiated another chance for Leverkusen. His free kick found Kießling on Dortmund's goalline. The tall striker managed to miss the goal from 2 (!) metres. On the other hand he was offside anyway, but still the referee's hadn't realized that. And to set a fitting end to these second 45 minutes Bayer Leverkusen had a last nice approach in the dying minutes. Helmes paced into our box and set the ball up for his colleagues. To our luck no Leverkusen player reach the ball. 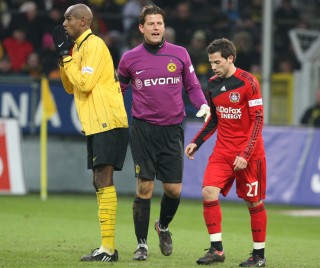 Summary
We were the slightly better team in the first half and deserved the half time lead. But after the pause it was only Leverkusen that dominated. We received an early equalizer and it really looked like Bayer Leverkusen would achieve a three pointer. With some luck and Leverkusen's inability to convert we got away with a draw.

Statements
Jürgen Klopp: "We are not satisfied with one point. In the first half we were not only physically better but also showed some nice football. We lost that in the second half. In some situations we showed too much respect, so in the end the draw for Leverkusen was deserved."

Bruno Labbadia: "In the first half both teams showed an intense match, my compliment for that. But changed after halftime. We pressed Dortmund back deep into their own half and created some chances. But in the end we didn't rewarded ourselves."