A crude step out of the mini-crisis 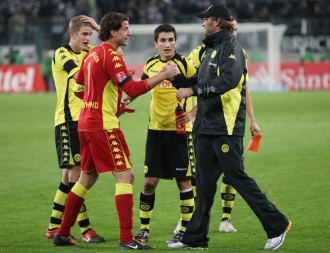 BVB’s 1:0 win against Borussia Mönchengladbach was not an impressive piece of football that football enthusiasts would repeatedly watch in some spare time. But no one in Strobelallee will care about the beauty of the game – what’s important is the result after 6 Bundesliga matches without a single victory.

Klopp could rely on Dede who came back into the squad, as well as Bender who played defensive midfielder so that Hummels was employed as central defender beside Subotic. Owomoyela completed the defense. Apart from Bender, the midfield looked similar to the one that played Sch****, with Sahin and Tinga one the half-wings and Hajnal as attacking midfielder. The strikers were Barrios and Zidan, the former hoping for his first goal in Bundesliga.

Gladbach surprised with Bradley and Friend getting into the team rather than Colautti and Matmour.

Gladbach got dangerously started with Bobadilla being served by Friend but missing the goal clearly. Dede, on the other hand, missed the goal after a nice circulation of the leather (7’). The dull match did not really develop into a high-quality match as both teams revealed their insecurity. Thus Friend tried a dangerous cross that Weidenfeller punched upon the bar(8’). Other „half-chances“ were Arango’s shot from more than 20 metres (20’) or Zidan’s try (23’). But then, finally, the ice got broken. Tinga tried to enter the penalty area, but got stuck – the ball somehow got to Barrios. Standing with the back to the goal, the Argentinian turned around too quickly for Brouwers and marked his first Bundesliga goal with a precise shot from 18 metres (38’). Bailly had no chance to react to Barrios’ powerful shot.

Apart from a blocked shot by Bradley (43’), there was nothing more to add to the first half. 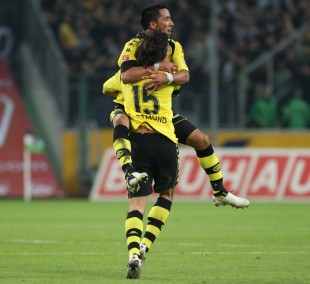 In the remaining 10+ minutes, Gladbach failed to come up with big chances but was gathering in Dortmund’s half – but the BVB-offense was not able to take advantage of a lot of room in Gladbach’s half: Kuba’s nice pass to Valdez could not be transformed into the decision-making goal as Bailly saved with a strong reaction (82’). 5 minutes later, when Kuba was served by Großkreutz, had ages to decide on how to score, but his finally weak shot was saved by Bailly – what a waste of great chances!

Luckily, Gladbach was not able to set up more pressure, and the whistle blowing showed heavy relief in the faces of the BVB squad, including Coach Klopp.

An important victory was lacking the glamour and quality, but the result only matters in a so far disappointing season. If the team is able to take this match as a first step to revive last year’s performance, BVB will rehabilitate quickly. Otherwise, we should get used to unglamorous matches – hopefully at least with the result of 3 points. 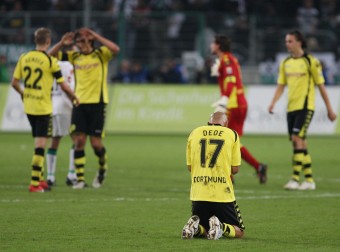