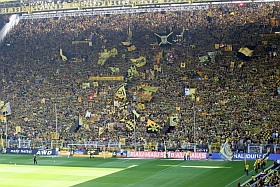 Our four BVB-supporters from Kent, England are back again. The second and final part of our little series called "Football's coming home" sees the four protagonists Neil, Robert, Matthew and Justin talking about their relationship to our crying neighbours (did you know we call them Uschis?), speculating about the upcoming German champion and giving us their opinion on the future of Borussia Dortmund.

You'll find the first part of the interview here. And don't forget to check our other schwatzgelb.de-videos (sadly mainly in German but still worth risking a look) here.