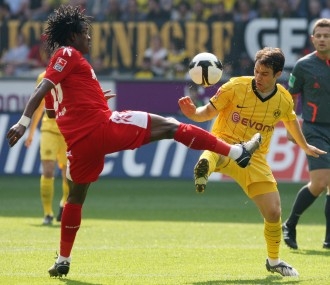 After the victories against Bremen and Hertha BSC, Dortmund also managed to win the game against the footballclub of Colonge. The third victory in the run. Good job boys.

After Dortmund's great performance in Berlin, Jürgen Klopp decided to not change the squad for the game against Cologne. Christoph Daum, Cologne's coach, undertook one change by letting Vucicevic play instead of Pezzoni.

Alexander Frei and Tamas Hajnal opened the game with one kick each in the first couple of minutes, however, it got quiet on Dortmund's side after these two actions. The Football Club Cologne was quicker, stood tighter and dominated the first 20 minutes of the game. Dortmund failed to really arrive at the game. The players were always one step behind, lacked ideas for offensive moves and did not manage to stop Colognes's offensive players. It was Weidenfeller who had to save us in the 6th minuted after Novakovic used Dede's mistake in the penalty area. Only four minutes later Vucicevic thanked his coach for playing from the beginning on by scoring and having Cologne take over the lead. Time passed and Cologne withdrew themselves a bit from the game which lead to Dortmund appearing to have the upperhand of the game with more ballcontacts. However, there was no change in their offensive actions and so the game rippled there for a while. In the 29th minute Dortmund got their act together and Subotic headed the ball into Cologne's goal after a corner kick by Frei.
Cologne, apparently shocked by this, had no answers anymore and so it was Dortmund who now controlled the game. Valdez in the 36th minute and Hajnal shortly before the break, missed to push Dortmund towards a victory and so the teams walked of the field for their halftime break with a tie in their back. 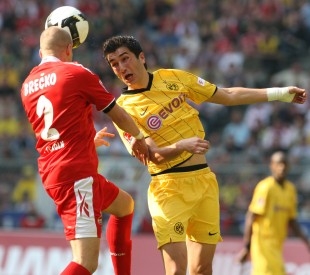 The second half should start differently than the first one. Tamas Hajnal kicked the ball into Cologne's goal from the distance in the 49th minute of the game. This was exactly what Dortmund needed at that point. Safety in the back of their minds in order to evolve a controlled offensive game. Daum then substituted Yalcin (63.) and Chihi (65.) into the game, Dortmund's defence however prevented every slight offensive attack from Cologne's side and so Dortmund continued to control the game. Alexander Frei had various possibilites to increase the score but failed. He managed though to prime the 3:1 by crossing the ball into the penalty area where Cologne's Geromel did the rest of the work by scoring into his own goal.
The last minutes of the game forged ahead and Dortmund was allowed to strike in the third victory in the run.

If you eliminate the first 20 minutes of the game it can be said that Dortmund played a neat game and deserved to cash in the three points. Voices now whisper the words Uefa Cup, but the coach and the players well said that we should do our best at every game and then see where it takes us. Well done Borussia, for not giving in after falling behind and fighting the way back to the victory. Let's now do the same good job against Bochum next week.