The boxer stood up impressively 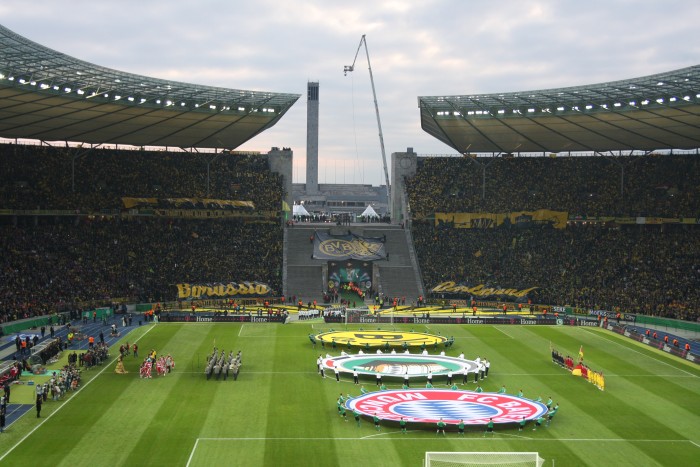 Look at us, Germany: The capital full of Dortmunders, a stadium reigned by yellow-black and a fight that one can hardly forget as Borussia almost successfully fought the Bavarian agricultural society. In the end of the day we can be proud of the team.

Pre-Match Issues
Last week's press reports mocked our team by asking why we are eligible to be in Berlin after the matches against Bayern and Hannover last week. That was almost ridiculous since we did not had the easiest path to the final and were dominating last round's match against Munich. So what's the point of the press? Easy to answer: Firstly, expressing their general antipathy towards our club and, secondly, building a "David against Goliath" scenario. Well, German press used to be on a better standard once...
Despite this criticism one thing is clear: We performed absolutely weak in the two previous matches. In Munich, the team revealed none of valuable qualities necessary if the opponent is superior in quality, such as the willingness to fight or to be organised tightly. The match against Hannover was not much different except for the result. Everyone knows that whatever team can perform poorly twice and then be totally different when it comes to a decisive match, such as yesterdays. But an additional issue was raised by the press-inducted debate concerning coach Doll. This was neither ne

cessary (at least not necessary to be raised a couple of days before the final) nor a sincere way the media decided to use. And nor was it appropriate by our fellow supporters to join the discussion and demand a new coach a few hours before the most important match of the year.

Let's get back to business. Our team's lineup was made up by Marc Ziegler who somehow deserved this final as he contributed immensely to us entering it. While Rukavina (who get ready for the match at last) and Dedé played as wing defender it was quite surprising that the oldies Kovac and Wörns built the central defence. But taking a step back this measure looks reasonable since both acted more consistent than Hummels and Amedick in the latest matches. Another surprise: Coach Doll decided to have two central defensive midfielders (Tinga and Kehl) and two offensive ones on the wings (Kuba, Kringe). The attack was made up by Frei and Petric as expected.

The team from the football-diaspora in Bavaria consisted of eleven players... 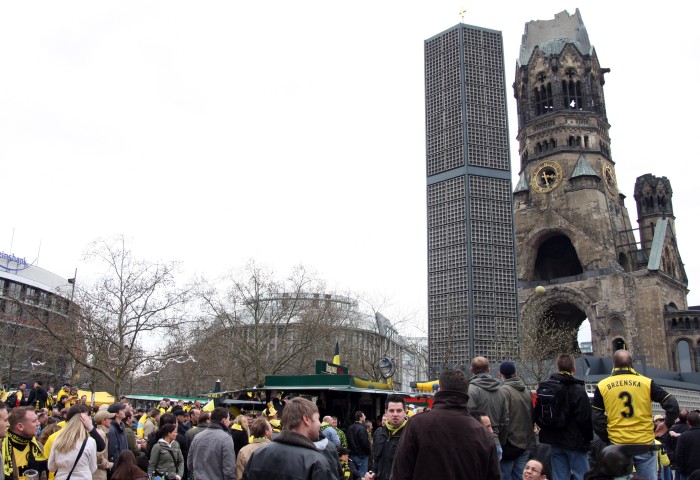 First half
Our team began nervous but yet more precisely than a week before in Munich. Lahm's first try after 5 minutes was easily picked by Ziegler. But then, a few minutes later, Luca Toni finished a Ribery pass and scored the first goal of the match (11th). A painful strike it seems since Borussia did not recover in the following 20 minutes. Alex Frei was totally alone upfront, Rukavina gave weak crosses from the wing and Kuba was nothing but a phantom. In addition, almost everyone in the team stood far away from his opponent. Klose almost took advantage of this situation but his header missed the target (25th). But then, a feeling of hope arouse when Kringe tried his first shot which can saved after half an hour. 10 minutes later, it was again Kringe - served by Kuba - whose volley try flew over the bar. Shortly before the whistle blew, we really had a big one: Dedé beautifully duped Lahm on the left wing and gave a sharp cross. Tinga waited to long and his massive shot was blocked by Lucio in the very last second (44th). The crowd stood up again and there was a feeling of strength in the air again. Bear in mind: 35000 supporters were ultimately superior to the jerks coming to support Bavaria. The capital was black and yellow, as was the stadium!
The first half was a process of recovering from the sudden shock which took place in the eleventh minute. But then, the team did well and started to spread optimism in all the 150 countries (!) in which the match was watched.

Second Half
Klose opened the second half with a precise header which missed Ziegler's post marginally (51th). His second try (54th) was even more precise and Ziegler was beaten - but Kuba scratched away the ball and saved it. About ten minutes later, it was the strongly performing Kringe served by a Petric-cross who was testing Kahn's skills (64th). We slowly became the team being responsible of playmaking. Dortmund wanted the equalizer! Thus, 35000 were about to scream out loudly when Kringe's header only touched the net from the wrong side (68th).However, the 71th minute revealed Knut Kircher's

unsuitability to lead a final. Van Bommel, one of the most known players for unfair gaming in Bundesliga, tried some Kung-Fu and fouled Kringe clearly. But instead of giving yellow, Mr. Kircher preferred to let the match continue. What a weak performance...
After a period of silence most of the Dortmunders may have accepted the 0:1 loss. The team showed courage and a good spirit so that we could all go home smiling. 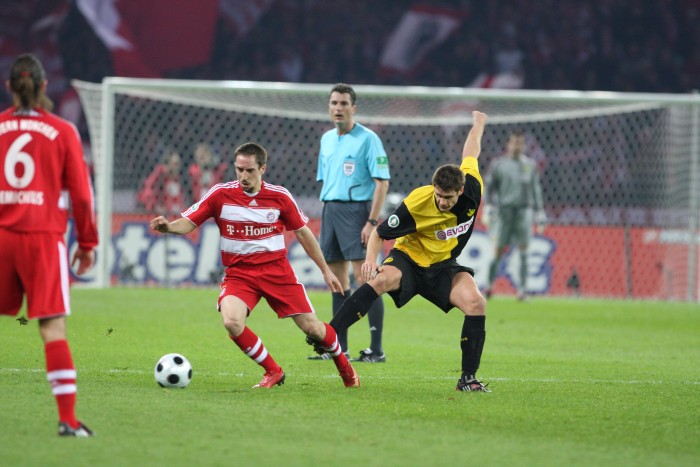 Injury time
But then, the 92th minute was played in Berlin and a corner was to be brought in by Dedé from the right wing. Take time to read more carefully than you usually do, mate! The corner was longer than normal ones performed by the team. Kringe got the header and put it to the centre of the penalty area. There, Wörns tried a second header which was blocked by Sagnol. The ball now was a couple of seconds in the air, moved to long post again and there Mladen Petric beautifully jumped towards the ball and smashed it in. Well, in that moment, I listened to the most incredible screaming of our supporters since May 12, 2007. Incredible! The team's reaction running towards Mladen and jumping onto him...incredible! What an incredible moment at all!
Then the whistle. Something was going to happen here...

Overtime
100 minutes were played and around that time a decision was in the air. In that 100th minute, Florian Kringe almost made the unbelievable shot happen: He tried a perfect shot with his left foot which was only to be stopped by Kahn.
And it was the following moment in which Ribery tried a shot (?) and served Toni who coincidently steered the ball into the net. Unlikely but true. Unbelievable.

The second half was not that interesting since our teams energy seemed to drop dramatically. Noticeable: Kuba's red card. But well, who cares right now?
We were running out of time and did not manage to get back strong enough. We were losing it finally.

Conclusion
What a fight and what a return by our team! Starting quite nervously, we could watch

a Borussia with the willingness to fight back and bring the cup to Dortmund. It was only the individual strength and some great piece of luck that determined Munich's victory.

If you are sad right now, that's fine. But do not forget: We are back in the UEFA cup. Next year, there will be Dortmund and Thursdays! That should be a pleasant gift for us. Give us some time and Borussia is back on track! 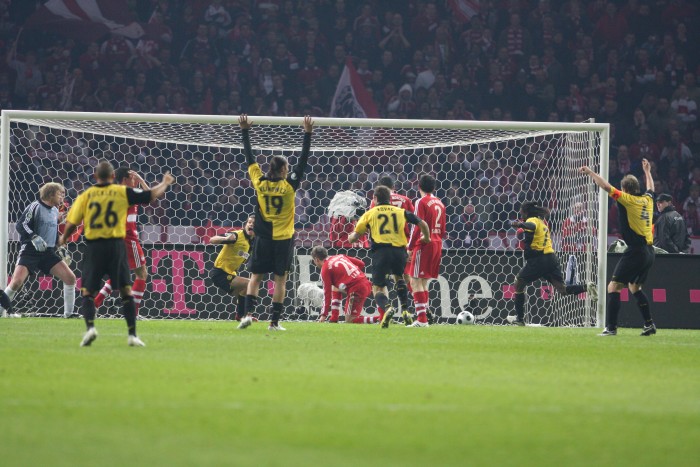 Ziegler: deserved this final. No insecurity this time and strong saves. A good job. 2,5

Rukavina: His crosses were not too efficient and precise; his defending (often against Ribery) was not consequent enough. 4

Wörns: There's not much criticism this time as he stood well in the defence and even contributed to the goal. In some situations too slow and insecure. 3

Kovac: C.f. Wörns, but in addition he had some good tacklings and rescued once dramatically when Ziegler was beaten. 2,5

Dedé: Started nervously (as the team did) but was later on organising the offensive gameplay of the team and at the same time securing his wing reliably. 2,5

Kehl: In his job as the organising part of the defence he seemed overwhelmed by Ribery and mates. But in some situation, his aggressive way of defending provided the basis for attacks. 3

Tinga: It is difficult to play Ribery, for sure. But he became stronger and more valuable after some time in the match. 3

Kuba: Although playing on his preferred position on the right wing, he did not stick to his

primary task (one-on-one situations on the right wing and crosses) and his red card weakened the team. 4

Kringe: Strongest performer on Saturday. He was Dortmund's battery, giving input to gameplay and being dangerous at the same time. His beautiful shot was almost awarded with the decisive goal in overtime. 1,5

Petric: Often supporting the midfield due to the lack of a playmaker. Left Frei all alone as forward but he was important as usual since he scored 2,5

Frei: He is not yet the on his top level of performance but he was totally alone against the best defence in Germany. 3,5

Klimowicz (71th, Frei): All alone upfront and without being served he had no chance to prove his skills. But in contrast to usual performances, he fought remarkably. 4

Buckley (79th, Rukavina): Showed some good piece of running with the ball and trying to bring in crosses. But had not many chances to prove further. 3,5

Valdez (86th, Kehl):There was a lot of running but hardly any efficient situation he contributed to. Had not much time to perform.