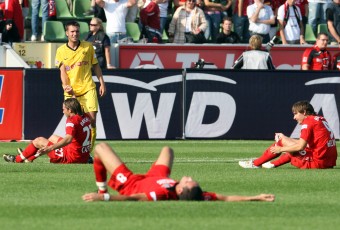 After what turned out to be quite a week here in Dortmund, Borussia is now all set for 90s-nostalgia clash against Bayern Munich.

JK vs JK without JBK - let's boil it down to this. Our JK, Jürgen Klopp, against their JK, Jürgen Klinsmann, without Johannes Baptist Kerner, who is back reporting from Bejing 08 after a short stint in Europe to host ZDF's coverage of Germany's mid-week test match against Belgium. Talk about Jet-Set, you talk about JBK. Klopp and JBK used to be a funny couple, topped with Swiss-ref Urs Meier for the last few years. They stood unimpressed when it rained over Bregenz during Euro 08 and even when Pele entered the ZDF arena during World Cup 06. Whenever JBK spoke about "a story not to be withheld" and it turned out to be yet more footage of how Klose visited his hair-dresser, Klopp grinned but in his mind thought about Arshavin's stunning run the other day. Klinsmann backed away from the two of them in 06. He came back after a stunt by Uli Hoeneß early this year. A job that had been tailormade for Klopp taken by Klinsmann. Just our luck! And let's not talk about Buddahs on Bayern's training ground. It's just not worth it. So for the second time this season the two managers meet in a competitive match this season.

We won the first clash 2-1, even if it was the unofficial Supercup, it was still great to see Hajnal's masterpiece free-kick from 20m which hit the back of the net. A month later now Bundesliga kicked off last week. And surprisingly enough it was Bayern that did not get out of the starting blocks fast enough. A 2-2 draw against Petric's new club Hamburger SV (see seperate story) was all they could manage last Friday. The Black'n'yellows 3-2 win away to Leverkusen was of course overshadowed by Dede's injury. Still it was an important step for our newly formed team.

Let's have a look at the teams

With Luca Toni set to make his return into the team, Jürgen Klinsmann has a tough decision to make. Miroslav Klose or Lukas Podolski? One of them will be left out of the team. Chances are high that out-of-form Klose can sit back and relax on the bench whereas Prinz Poldi, cleared to play after mid-weeks Kung-Fu attack by Belgian goal Stinjen, will be fielded next to Luca Toni. Borowski should replace Toni Kroos in midfield, thus making his debut for the Bavarian giants. Defense will see Lahm and Lell on the back positions and van Buyten and Lucio in the center. Young Michael Rensing will struggle in goal to keep a clean-sheet. The shadows of Oliver Kahn are way longer than he expected them to be. German-international Marcell Jansen will again be benched. There is no way to get past Lahm these days. He could be a surprising candidate to replace Dede on our left back position. Which leads directly to 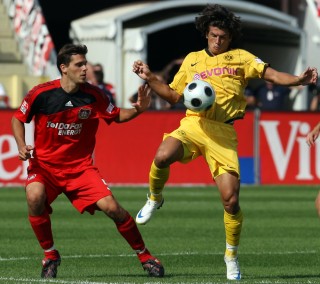 It has been a turbulent week at Rabenloh. Petric waved goodbye, Zidan arrived from Hamburg and Dede had to undergo surgery on his injured knee. Currently there is no replacement for him from outside the club. "Dede has been my hero for a long long time", says his back-up Marcel Schmelzer. The Magdeburg-born Schmelzer is set to make his starting eleven debut making our defense one of the youngest defense that was ever fielded in Dortmund. Schmelzer (20), Subotic (19), Hummels (19) and Rukavina, the elder-statesmen with 24 years as right back. Ziegler will replace Weidenfeller in goal after Weidenfeller's self-inflicted cleat-wound last week. It has not been Weidenfeller's year so far. Our midfield will not be changed hence Kuba, Kringe, Kehl and Hajnal, who scored twice for Hungary this week, gonna set the pace. Up-front Zidan should make his debut after only a few days in Dortmund and Nelson Valdez looks to net the ball once more. Patrick Owomoyela will be amongst the subs for the first time. Alongside Owomoyela we will see familiar benchers like Nuri Sahin, Marc-André Kruska, Federico and Robert Kovac.


It gears up to be an exciting day at Westfalenstadion tomorrow. Yet another win would see us travelling to Cottbus relaxed and would make way for an exciting week in Munich. And what else but a 2-1 over Munich would you expect these days? Boys, it is up to you, to make our weekend. Bring some "high speed entertainment" to Dortmund!