Finally, the season is over 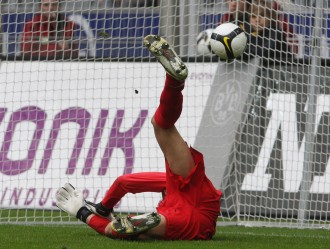 A disappointing season 07/08 has finally come to an end last Saturday when Dortmund lost at home against Wolfsburg. This was the last match for Coach Doll who gave up his job two days later.

Before kick-off the club officials said goodbye to three players who will leave BVB. Alexander Bade, Philipp Degen and captain Christian Wörns were offered a present. Wörns was cheered particularly by the supporters because of his long history at Borussia.

It seemed as if the team was still in celebration mood because they were lying behind 0-2 after only 6 minutes. Wolfsburg could score with their very first attacks. At first Rukavina cleared a corner kick right to opponent Riether whose header passed Höttecke from a distance of 20 meters. 3 minutes later there was confusion in Dortmund s defense line and Marcelinho s free kick went in from an even further distance.

After 20 minutes BVB took possession of the game. In minute 25 Hummels sent Federico into the box. Giovanni passed onto the far post where Alex Frei could score easily 1-2.
Now Borussia was clearly the better team, pushed by the Yellow Wall and fighting for the equalizer. In minute 42 Valdez sent Frei alone in front of goalie Benaglio who brought down his Swiss teammate, penalty for Dortmund. Alex decided to take the chance but Benaglio could save Frei s shot. Short before halftime Valdez had another goal opportunity but he missed the target. 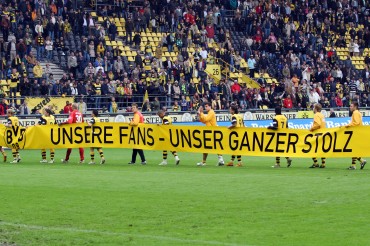 Dortmund had two opportunities by headers from Federico and Hummels at the start of the second period. Than both teams took a little break from the action. In this period Marcel Schäfer awaked everyone by scoring the third Wolfsburg goal with a great shot from distance. 3-1. Now Dortmund was back in to the game and ready to score the next goal. In the 69th minute it was again midfielder Federico who served Frei and the Swiss striker reduced the score 2-3. The atmosphere was hot and everybody believed in an equalizer when seconds later Frei headed in another ball into the net. But the ref assistant saw an offside position of Frei, a very controversial decision. Dortmund created a lot of pressure and tried to score a regular third goal. But another stupid mistake decided this exciting match. Amedick who went in for the injured Hummels was outplayed by Marcelinho near the low post. The Brazilian found his team mate Grafite alone on the second post who had no problems to score the 4-2 final result.

Now the match was decided and Dortmund gave up their attacks, while Höttecke had to save some very dangerous shots. Soon after this the game was other and Borussia lost the last game of the season.

Wolfsburg was the cleverer team while Dortmund made to many simple mistakes. This game was quite a good example for BVB season. There were ups and downs and these personal mistakes that brought too easy goals for the opponent. At the final table Dortmund positioned in 13th position with the highest number of goal against the team (62).

N.B. On Monday it happened what was expected to happen: Coach Thomas Doll announced his demission as coach of Borussia Dortmund. The Management is searching for a new one. Former Mainz 05 coach Jürgen Klopp seems to be the favorite for this position. 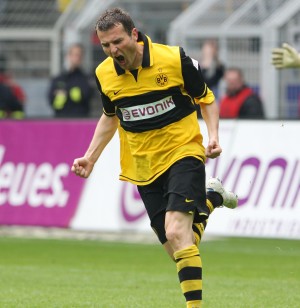