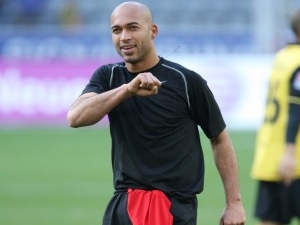 Dortmund was behind 0-1 against Bayer Leverkusen until the 87th minute, when Frei and Dede turned the game into a victory.

BVB had to replace the banned Wörns by defender Robert Kovac. Alex Frei had to sit on the bench while coach Doll gave Valdez another chance to convince him and the supporters.

First half wasn't very spectacular and so I won't bore you with useless scene commentaries. There were only 2 situations that are worth to be told:

- In minute 9 Nelson Valdez tried a shot from 16th meter but Adler had no problem to save the ball.
- At the end of this half Bayer defender Sarpei lost the ball to Federico who send Petric on the way with a brilliant pass but Petric' shot couldn't pass Adler.

The second half was far more exciting and began with a long ball by Hummels into the front. Bayer defender Friedrich missed the ball and Valdez was running alone in front of the goal. But the Paraguayan striker missed the target with a poor shooting performance. Just after this Leverkusen created their first goal opportunity when Castro passed into the box to Kiessling, whose shot was cleared into a corner kick by Ziegler.

In minute 51 the same Kiessling scored the lead for Bayer after a bad mistake by Ziegler. Dede was passing the ball back to his goalie, Ziegler had no pressure but missed the ball with this right foot. The ball fell down to the feet of Kiessling, who had no problem to hit the ball into the abandoned goal. Again Borussia beat themselves with an unforced error like several times this season. 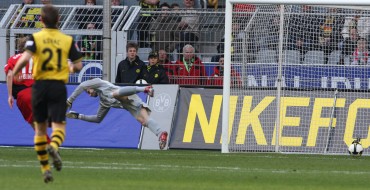 Coach Doll reacted and brought in Frei, Buckley and Klimowicz for Federico, Kringe and Valdez. This didn't change anything for quite a while until minute 78 when Frei got a free kick near to the box but his shot only hit the left post. Now Borussia and the south stand were on fire trying to score at least the equalizer. Two minutes later Frei missed a ball brought in from Buckley by a few centimeters. The next time it was Buckley whose shot went over the gate when Kehl served him on the penalty spot. Time was running against Borussia.

In minute 87 Dede catched a long ball from Adler, passed the ball to his mate Buckley who served again Dede on the left wing. The Brazilian defender entered into a duel against Castro and got rid of him. Dede passed the ball into the box where Frei hit the ball volley into the net, 1-1 and the Westfalenstadium was shaking. This was Frei's first goal of the season, the first since the legendary 12th May 2007 (2-0 Derby win against Sch*lke)

Now Dortmund tried to get the three points. But Leverkusen had another great opportunity when Kiessling came into a good position but missed the goal. In minute 92 Rukavina served Frei but goalie Adler showed why he's one of the candidates for the position of the German national keeper and cleared into corner kick, probably the last action of the game. Frei brought in the ball but Leverkusen's Barbarez headed the ball out of the box. The ball came directly to Leonardo Dede who tried a shot from 17 meters. The ball past through several defenders legs and went in 2-1. Dede jumped on the fence of the south stand and it seemed as an earthquake hit the stadium. Everyone was standing and cheering this unbelievable victory. The ref finished the game after this action. 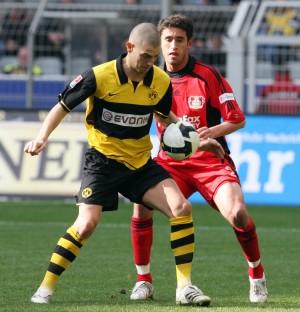 Summary:
A deserved but a lucky three-pointer for our BVB. Again they had to deal with a huge personal mistake. But they didn't give up, came back into the game and scored the winning goal. For the first time since 2006 they win a match after lying behind.