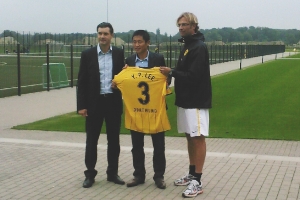 In reaction to Dede's longtime injury BVB grabbed Tottenham full back Young-Pyo Lee. His contract is valid until 2009 only. No transfer fee was published.

Still having the shock of Dede's torn cruciate ligament in mind, BVB reacted quickly and set their focus on top teams that bought new players big style, thus having some spare players.

Sporting manager Michael Zorc finally found a fitting player in England's Premiere League. Tottenham Hotspurs had sigend Lee in 2005 from PSV Eindhoven of the Netherlands. He played 97 times for the South Korean national team and was participant of the 2002 and 2006 world cup. Borussia Dortmund found not only a left back but, as lee is strong with both feet, also a back up for the right side. In addition he can help out in holding midfield.Young-Pyo Lee will get the jersey with the number "3" and is an option for our match in Cottbus this coming Saturday.