Another draw against Berlin 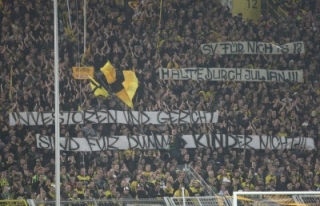 As autumn finally hits the city of Dortmund, Borussia keeps it simple. Another draw at home leaves the Black'n'Yellows stuck in midfield. A late equalizer by skipper Sebastian Kehl saves a point against a Hertha stonewall.

After last weeks exciting last minute draw against Werder Bremen Jürgen Klopp changed the formation again. Mats Hummels was brought in for chipped Robert Kovac and Hajnal after his minor injury entered the newly rebuilt diamond formation for Swiss international Alex Frei. Kuba again started as a solitary forward accompanying Nelson Valdez. Santana, Kruska and Federico had to move up onto the heated seating area. Hertha BSC Berlin, after a midweek 1-1 draw at home to Benfica Lissabon, started with heavily discussed Pantelic as clumsy Liverpool-entry Voronin missed the match due to an injury. 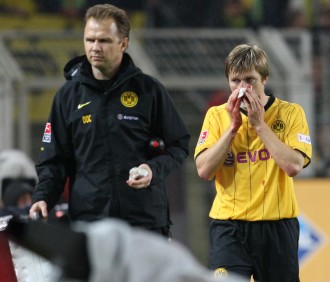 Some 67.000 spectators on a Sunday evening against one of the most boring and annoying teams in Bundesliga football ain't too bad. Heavy rain flooded the pitch right before kick-off paving the way for a heartly fought match.

And our boys got off to a good start. After only five minutes a great combination left Tinga just in front of the wide open goal. Valdez had stuck the ball through to him with his heal. But Tinga hurried and shot wide. An attractive start but after both Kehl and Kringe missed to score the opening goal Hertha fought their way into the match. Starting off with a few lame counter attacks they brought trouble to the Dortmund box after a quarter of an hour. Subotic managed to clear a Raffael shot on the line the following corner left Schmelzer stepping in for beaten Weidenfeller. Albeit Borussia played organized and Kuba looked great on his side. But after some 20 minutes he had to leave the pitch with a bleeding nose. Hertha left back Stein unintentionally hit his elbow right into our own „Figos" face. Resulting in a broken nasal bone. „We have already ordered a mask for him, his nose is destroyed, pointing in all directions" said Jürgen Klopp after the game. Alex Frei came on as a substitue and fired a shot towards Pavel Drobny just seconds later. The Hertha goalie saved. Another good chance without any result after 25. Valdez hammered the ball right over the bar from more than 30 meters. But Borussia stubbornly tried to find their luck right through the massive central defense. After Kuba's injury our game lacked inspiration. And so finally one Hertha counter attack got really dangerous, a long ball from Pantelic was missed by sliding Hummels and reached Raffael who cruised round Weidenfeller only to stumble over the goalies arm. Penalty. 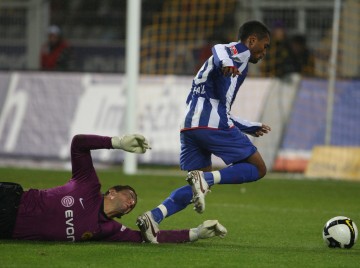 And like nearly every penalty, Cicero had an easy time sending Weidenfeller into the wrong direction. So the clock silently ticked away. The rain still flooded the pitch on which nothing much happened until the dying seconds of this first half. „I am sick of those wrong calls. The linesman even told me 'you were already favored by refs this seaons, you should be quiet' I know we've been lucky against Schalke but this led - even if it was a derby - to one point. They robbed us of four against Hannover and Berlin", raged Klopp afterwards, talking about Chahed who had cleared a Frei corner off the line - with his arm.

A mysterious wake up call during half time saw Suedtribüne pushing the lads towards the massive Hertha defense. Every Hertha player but Pantelic now circulated in front of their own box, forming two lines. „We had to find our way round the outside, and that's what I told the team during half time, but - of course- there were a few good combinations"explained Klopp. And so some attempts were made but Lee, Schmelzer and later Owomoyela coming in for Schmelzer were not able to threaten Drobny with their crosses. Only set pieces brought some danger. But Frei and Subotic could not change the result with their free kicks. Finally a Frei corner found Sebastian Kehl's head whose header bulged the back end of the net. 1-1 after 71 minutes. Lacking in the final offensive power chances by Zidan, Hajnal and Valdez resulted in nothing countable and so as the match came to an 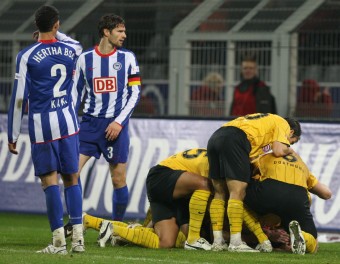 end we drew yet again.

Borussia, facing Cologne FC this Wednesday, again were not able to win at home. Making it one win (against Stuttgart) and already four draws out of their five games at Westfalenstadium again. Slowly losing touch to top of the table teams like Hoffenheim and Leverkusen and staying put on eight spot after nine games. As in most matches this season a good performance resulting in a draw. We now need to steal three points from newly promoted Cologne who - after a three match winning streak - lost away to Leverkusen on Friday. With matches againt all of the topteams - only Hamburg coming up next week - we finally need to pick up a few more wins on our path to the winter break. 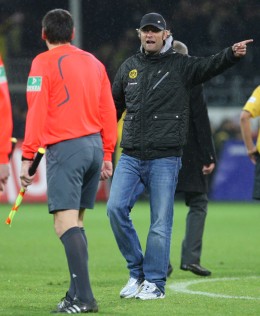