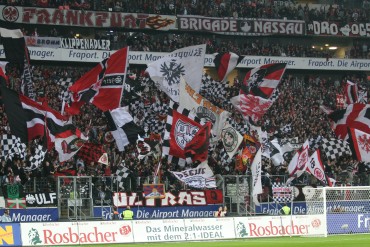 After mid-weeks legendary Doll press-conference and the lost cup final Dortmund managed to jump out of the downward spiral with a 1-1 draw in Frankfurt.

On Wednesday Thomas Doll splashed out his bag of tricks for lazy journalists. A press conference became talk of the country and drew attention away from Borussia's negative history on the back end of the season. Only one win out of eight games, a lost cup-final and rumours of a new coach on cup-final day. Time for a rant. Doll answered back blaming journalists for getting at his team and him. "I don't give a flying shit about who'll be the coach here next season. I don't care about it. We know we are trailing behind in the league but hey, why doesn't anybody say: Wicked! How cool is that? We have qualified for Europe. When I got here nobody gave anything on Borussia. They were doomed for relegation. Look at us now!", he mumbled then got excited and continued to comment on Borussia's future "Ziegler asked me: Coach, am I still allowed to take part in the training session? I can only laugh my arse off! We have five games in hand and all you do is go on about how will be playing here next season. Christian Wörns, Robert Kovac - all long gone, if I believe you. But they have to win us a few points". Needless to say, everybody loved this speech and everybody had at least one opinion on it. Whatever Doll intended to achieve, he at least achieved one thing. The team focused on the important Friday night clash with arrogant eagles of Frankfurt.

Eintracht Frankfurt, one of the teams we had beaten on our way to Berlin, got into the match with a losing streak of three games in a row. They had gotten close to their 45point-goal a few week ago but ever since did not manage to jump up from 42 to 45 thus losing all ambitions of qualifying for Europe this year. Frankfurt had to do without Sotirios Kyrigakos (broken nose) and Chris. Coach Friedhelm Funkel also left out Brazilian-midfielder Caio, a much discussed player amongst Frankfurt supporters. Borussia Dortmund were able to field the same line-up as in Berlin, only local-hero Marc-André Kruska replaced injured Sebastian Kehl. TD also went for the same tactical corset. A 4-1-4-1 changing to 4-3-3 during possession of the ball. Petric and Kuba covering the flanks with Frei playing in central offense.

Let's cover a huge cloak of silence over the first 45 minutes. Both teams were committed to not concede a goal. A rock solid performance from Borussia's defence getting worse while looking towards the Franfurt goal. In minute 39 Petric managed to dribble into the box and pass the ball back to Tinga who's shot went high above the bar. That was Dortmund's first shot at the goal. Half-time. 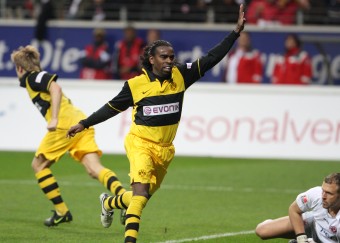 Both teams got out of half-time unchanged still the match was a different one. With less than 60 seconds int the second half Dede left Ochs uncovered on the left side and Ochs' cross flew past our defence and on to unmarked Köhler's head who had no problem getting the ball past Ziegler from three meters. Right-back Rukavina had let Köhler out of his sight. As in a lot of matches this season the Frankfurt goal was nothing less than a wake-up-call for Borussia. Only some two minutes later Kruska nicely hammered the ball against the cross bar. An unbelievable effort from Franfurt goalie Markus Pröll who just managed to get his fingers on the ball and deflected this 80mph-rocket towards the bar. And a further two minutes into this thrilling start Kruska showed some of his soft skills. The holding back was uncovered some 25 meters in front of the box and lobbed the ball over the Frankfurt defence. Kuba had ran into position and picked up the ball with his right foot, he then with ease left-footed the ball past flabbergasted Pröll. The equaliser! Borussia Dortmund were now set on fire. Dede walked along the left flank, swung the ball in. Mladen Petric stood in front of Pröll and was able to pick a corner. Too much thinking! He hit it into Pröll's waiting paws. Borussia now were very much in control of the game but not able to come up with some more exciting box-action. After 69min Frankfurt brought on Caio for Weissenberger and Dortmund accordingly substituted Kringe and Frei. But new-boys Klimovicz and Delron Buckley had to work against a now intact Frankfurt offense. Caio took command of the game and so Frankfurt got closer to scoring a second goal late in the match. Twice Ziegler denied Frankfurt and we managed to steal a vital point.

Where does it leave us? With only four games in hand Kuba's equaliser has put an end to all relegation-fears. We are now eight points up on Nürnberg, whom we will be facing on Friday. The Koller-team failed to materialize a 2-0 lead against Arminia Bielefeld. We can push Nürnberg closer to the edge on Friday and finish the season in style. We took a first step towards that after finally zooming into Bundesliga again. The past matches in the build-up towards the cup-final should now be written off as cup-preparation. For the first time in a few weeks Borussia players had their hearts in a league-match. Whereas most Dortmund fans only waited to celebrated on Sunday. Schalke is now officially waiting for a league titel for 50 years! 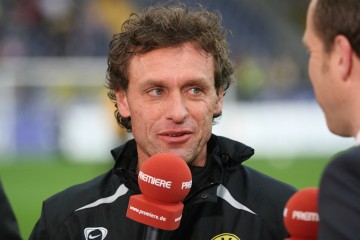 At: World-Cup Arena Frankfurt - sold out with 51.500 spectators