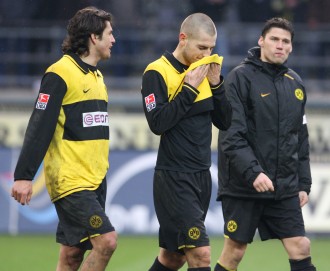 Back to Bundesliga. Our battle-weary cupheroes entered the rain-soaked pitch this Saturday to fight a grey midleague-position. Their opponents travelled up from the south. Karlsruher SC have been the surprise-team this season. Coming directly from League 2 they had a brilliant first half of the season and only lately have been showing some signs of tiredness. We got midfielder Hajnal, Hannover got swiss-defender and Karlsruhe-skipper Eggimann and right back Görlitz seems to be on his way back to giants Bayern Munich. After losing two players and two matches in a row they could have been the team for point-furaging Borussia. But it was not to be.

Thomas Doll changed the team on two-positions. Bringing in Mats Hummels for Martin Amedick and Nelson Valdez for looking-for-form Alex Frei. In front of 74.500 spectators the black'n'yellows took command of the match right from kick-off. Nelson Valdez and Federico were not able to finish off after two minutes and only three minutes later Valdez again was denied by Markus Miller. Dortmund had a nice set-up in midfield with Tinga and Kehl setting the pace. Former Karlsruhe-player Giovanni Federico proved again that he is a phantom. Kringe set the ball up nicely for him after 12 minutes but his shot just went wide. The Badenser were nowhere to been seen and Dortmund controlled the match. Thus it was no surprise that after 24min Dortmund took the lead. Rukavina had been taken down coming in from the right and Mladen Petric scored from the free-kick. A two-men wall followed the curled ball who hit the right back on the net. Our first goal from a free-kick since the great days of Andreas Möller (or so it felt). In the meantime the grey sky had opened its gates and rain flooded the pitch. Our defenders obviously enjoyed it. Both Hummels and Wörns slid over the grass and got every ball they wanted to get. Aging skipper Wörns even showed skills opening up our game. One of his solid passes 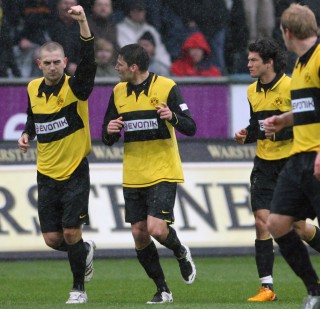 found Florian Kringe. He turned, looked up and saw Federico. His nice pass was deflected by bad-boy Maik Franz and reached Nelson Valdez who found his champion in Miller for the fourth time in 30 minutes. With Tinga, Kehl and Kringe in midfield and Rukavina on the right flank Borussia kept up the pressure but did not get closer to score their second goal. When after 44min a misguided Hajnal cross nearly found his way into the back of the net, Karlsruhe for the first time had been a threat to Ziegler's goal. Half-time. Great atomsphere all around with chants from the north terraces being shouted down by Suedtribuene who like our team were happy about the pressure drop last Tuesday. Back to Europe and back to fancy combinations on the pitch. Only a second goal was missing.

Tinga stayed in the changing rooms and Delron Buckley came on as a sub. But besides that nothing changed. Two minutes into the game Markus Miller this time caught a ball that had already rolled around him. Again unlucky Valdez had tried his luck. Amazingly this was the last chance for some twenty minutes and Borussia let the match slip out of their hands.A one-two from Carnell and Freis was followed by another one-two by Carnell and Ziegler. But the playground equipment went past the near post. Ref Weiner then decided it was time to get the stadium going. Whereas in the first hour everything was fair it suddenyl turned AKarlsruhe-player was heckled by Hummels and Wörns and fell. Penalty? No penalty? Whatever. Dortmund with a rare-opportunity hit the wall aka Markus Miller and had the ball safe for a few minutes. But Florian Kringe lost the ball in midfield. It found Tomas Hajnal who passed on through to Sebastian Freis. Dede rushed back, slid into the shot and lobbed the ball over Marc Ziegler. Suddenly Karlsruhe were level again. This led to furious arguments in own of the blocks on the south-west seaters. A group of some 40 Karlsruhe fans had falsely been admitted entrance to the block and now were provoking big time. Police raided the block and got the scum out of sight. Looking back down on the field, Dortmund attacked Karlsruhe and were pushed by Suedtribuene who was on amazing form tonight. But Petric, Kruska, super-sub Klimowicz and Petric again could not get the ball past Miller. Nelson Valdez 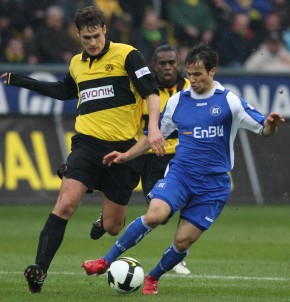 in astonishing form set up a few of those chances and Rukavina again put pressure on KSC's left defense. Westfalenstadium was a one-way-street. Sebastian Freis found his way out and suddenly put the ball past Ziegler but not past Hummels who cleared on the line. A late Kruska-corner brought excitement and confusion. A mob of players gathered within the box, Klimovicz got his foot on the ball and passed it to Wörns. The 36year old finished off from near-distance and Westfalenstadium was a madhouse. 2-1 up after 93min. But everyone went quiet when Weiner declared the goal offside. Sadly he was right. Wörns stood between Miller and a KSC-player who waited on the line. And so the exciting match ended.

Where does it leave us? For the first time in a long time Borussia set up a great match but were not able to score the crucial second goal. Our 15th pair in defense were in control of the match for most of the time and our midfield with Kehl, Tinga, Kringe and Federico looked good. Their play gained us a few good chances. Nelson Valdez proved that he can actually be nice add to our team. We could have easily won this match 4-1 if it hadn't been for Markus Miller, who on this day was not of this world. With 10 points ahead of the relegation-zone and only nine matches to play we should need some three points more to avoid any relegation-trouble. Let's pick them up in Bochum next week!

Well, I think we showed a good match in the first half which we weren't able to so in the latest matches. We had good circulations, everyone moved to be able to recieve the ball. That looked very good and it was fun to look at it. We had the chance the score the second goal, but did not reward ourselfs in order to calm down our gameplay. We were very attentive in our defense. It looked much, much better than in the match agains Jena. Everyone worked good, closed the rooms and that was really good.
Wat I didn't like at all was the start of the second half, where we had a 15 minute blackout and we helped to prepare the 1:1 for our guests. We lost many balls and were very careless. The nice thing is that we - yes - with passion and encouragment came back in the match. We created lots of chances but didn't and didn't reward ourselfs. It was not ment to be to score the 2:1. We had the chances, but the opponent keeper was fantastic in saving all the chances. Yes, we had the chance to cap a fantastic week, have a real nice easter and two points. That is what remains at the end: That we did not reward ourselfs for lots of won duels, for owning the ball much more than our opponent and, of course, all these chances th score. But, what was also important is, is the fact we played soccer again and that is an important conclusion.

It was important for us to get some points again after two losses, but it didn't look like that in the first half, That was a very week performance in the first half in which we were lucky not to become more goals. We talked about that during the break, I said that we should not play like that in the second half, otherwise we would have absolutly no chance. If it doesn't work in a match, you have to run more, be more aggressive in duels and play with more courage. I believe we did this much better in the second half. We got two or three chances to score, but without playing as we did this in some other matches this season. But we were better as in the first half and managed to score the 1-1 in this phase. What I don't like is, that we allow a lot of chances. It was like that in the first half and also in the phase of the match were we played better in the offense. We allowed far to much chances in the second half als well and our advantage was, that Markus Miller could show all his skills in this situations. Thanks to him we got this one point here in Dortmund.Borussia: Ziegler - Rukavina, Hummels, Wörns, Dede - Kehl - Kringe (71. Klimowicz), Federico (58. Kruska), Tinga (46. Buckley) - Valdez, Petric

Referee: Weiner, Grade 3. Certain in the importand Situations, in duels sometimes to particular, so he disturbed the match in the end to much.