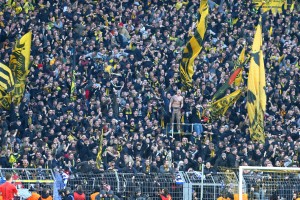 Of course, a 3:0 win for Borussia Dortmund is always great! But a 3:0 win against Sch...e 03 + 01 at home is much greater! It was Borussia's 4th win in a row and our club climbed up to number 10 in the table. The very defensive acting team from the Gelsenkirchen suburb had no chance against our team on Saturday. Borussia's performance on the green was a great one and for most of the viewers two questions became significant: How could the blue white team reach rank 3 or 4 in the table during the last weeks? And the other one: Why didn't Borussia show such an excellent shape in the first leg of this season? Nobody can give the answers to these questions. But for BVB supporters the main message must be: Let's all be well grounded. There will be 11 remaining matches until the end of this season. So, let's all see what will happen to our Borussia and to our competitive teams. And our competitors are currently all the teams fighting against relegation but also the teams struggling to qualify for the European cup. Maybe the result of our next match in Hamburg will show which way our team will go this season.
But let's take a last look back to our 3:0 win against Sch...e! Funny, that supporters of the blue and white team are complaining about Pierre Emerick Aubamyeang's and Marco Reus' short masquerade as Batman and Robin. Even today they are talking about disrespect and a lack of sportsmanship. Ridiculous in my opinion! I'm sure if a Sch...e player had celebrated a goal against BVB in a Batman costume he would be a blue and white hero in the eyes of most of Sch...e's supporters. The match on Saturday wasn't only a derby, it was the biggest derby in the Bundesliga! And the derby winner needs no special permission from Gelsenkirchen how to celebrate!
Henry 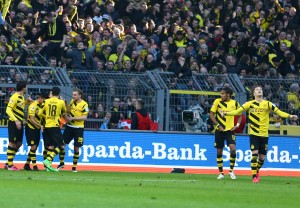 A game, where you don't care about anything that goes on around you or other results, and where you don't make any further plans for the night because you don't know how happy or pissed off you may be after the game, must be a special one. And it was. After most of us had broken down at least 10 times during the game until the 76. minute, because it felt like something in the football universe must have gone wrong, the relief came in shape of- Batman. It has been quite some time since I have last seen everyone around me going so mental that it felt like an earthquake hitting the Süd. But then again, what is any other victory compared to a Derby-Victory? But it is not only that. We did suffer in the first half of the season. Big time. We suffered to a point where people jumped back and forth from questioning Klopp, to doubting Reus, to blaming the World Cup to simply being in total disbelief. Me included. Thus this game contained so many fantastic things at once: An incredible Derby-victory, the fourth victory in a row (remember: during the first half the highest run we achieved was two in a row), a completely overwhelmed Mkhitaryan, who finally scored again, and the whole team jumping on him in joy, and Batman and Robin, who show, that our boys in Dortmund still think it is fun to play for this team. We did suffer and most definetely our boys (or men) in black and yellow had a rough time as well, but we are on a good way. Even if our unbeloved opponents from Hamburg welcome us next Saturday, noone can take away from us what this Derby victory means to us. I love how Reus and Aubameyang have found their congenial partner in eachother, but even more than that do I love how the whole team fealt with Miki. Everyone know what this goal meant to him and the emotional celebration of everyone, was just heartwarming. My highlight of the game (besides the score).
However, it is that time of year again where you jump from game to game, and while we are still walking down memory lane, our players have already boarded the plane to Dresden for the next task: DFP CUP. Ruhrpott-Horror Dynamo Dresden is awaiting us after having beaten Bochum and the blue ones in the previous games. So this will most likely be a difficult game that we have to fight our way through and we all know that the Cup has its own rules. The Cup is special to every one and Dresden will not do us any favours. So until tomorrow evening we may all continue to run around with th huge smile on our face and then be focused and supportive! On the back of the derby-victory and spirit, we will do this! Let's go Ballspielverein!
Ida 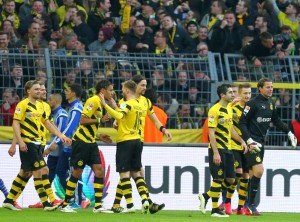 What a game! What a feeling! It's hard to describe in words what has happened last Saturday in one of the most one-sided derbies of all times. I don't remember when I last saw people flying and lying around me in the way they did after Aubameyang scored the opener. There was a guy some feet beside me who had literally 15 men lying on top of him after he had fallen down at least three steps with his back to the pitch. There were liters and liters of beer floating down the terrace. There were bruises everywhere. I also discovered a big one on Sunday evening that I still don't know how I got it. And it doesn't matter, because the feeling that caused it overshadows (or better: overshines) everything. It was that feeling of revenge, the feeling of justice and even more so the feeling of a perfect football game.
We had tough times during this season. Moments that we doubted the team, the trainer, even our love for the game at some point. When no-one wanted to hear a word about football. When grown-up men and women burst out in tears at work on Monday morning if someone dared to ask how their weekend was. We asked ourselves why we do this to us and why we just can't be normal and go to the movies on Saturday like everyone else.
Well, this is why! This victory, this feeling, is why we love football, this is why we go to the games and this is why we put ourselves through all the shit that comes with it sometimes. A feeling like the victory on Saturday is something that no-one who hasn't lived through the rough times will ever be able to understand or feel. Or as a friend of mine put it when posting the picture of the 3:0 score in facebook "apology accepted".
The fact that the last two goals - as great it was to see Miki rewarding himself for his perfect game and finally looking like his old self again - weren't enough to even come close to a score that reflects the dominance in the game makes it even better. We didn't only win the most important game of the season, we did it by completely and utterly destroying the opponent to a point where one has to ask if they were actually on the pitch.
And so we keep on smiling like we haven't done in quite some time. I can't imagine how many spontaneous smiles a Monday morning traffic jam announcement mentioning "Gelsenkirchen" will have caused in the region around Dortmund yesterday. But as perfect as it has been and as much as we like this feeling to be forever, we have some more tough games in front of us.
Cup opponent Dresden has proven to be quite a challenge, especially for teams from the Ruhr area and we really need to give our best in order to not lose that constant smilie-face a lot sooner than we think. The same goes for the next Bundesliga game against Hamburg on Saturday. It wouldn't be the first time that we travel to the north with high spirits and come back disappointed.
On the other hand, none of the two stands a chance against that Borussia we have seen on Saturday. We all just need to make sure that this is the spirit we are taking into the next games. Then we will still have to see where the journey ends, but in this case I would be absolutely sure that we have an end of the season in front of us that we didn't dare to dream about four weeks back.
Nadja 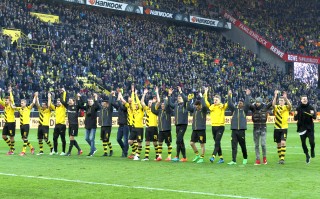 I usually have a bad feeling before Derbys and Saturday was no different. I expected S04 to be defensive but never thought we would be this dominant, I actually can't remember a Derby more one-sided than the one on Saturday. And despite us playing absolutely brilliant and creating so many chances at halftime I thought this could be one of those games again where we just can't score and then get hit on a counter attack. In the second half the game stayed exactly the same and I thought maybe it would just end like last year's 0-0 until Aubameyang released everyone! The Südtribüne went absolutely crazy and it reminded me of my very first Derby win on the Südtribüne back in 2007, there is no better feeling! Just as important as that opening goal was Miki's goal right after for me and what better time to finally get a goal than in this game. I think it was clear to see how much that goal meant to him, the players and basically every single one in the stadium! It was also great to finally see him so happy and relieved after the match! Marco's goal was the icing on the cake in the end! Speaking of him it definitely feels like his extension gave everyone in the team a huge boost and especially he himself looks like a weight has been lifted of his shoulders! It also feels like he gave the fans a bit of that belief back a certain other player destroyed back then. In the winter break Klopp said he hopes that in summer we will look back on this season and think "remember when we were bottom of the league and what happened then?". Now we will definitely have this fantastic Derby win to look back on and it made up for so many of the other games where you went home disappointed!

Somehow I wish there wouldn't be a mid-week game this week because I just want to keep enjoying this Derby win a bit longer but luckily I think the team won't have a problem with focussing their attention on a different competition right away. I think it will be a typical Cup fight but pretty positive we will get the job done there!
San