And then came Freiburg ...

We’ve been waiting for this moment far too long. Our last win dated back to match day 14, the 5th of December 2014. And then came Freiburg… 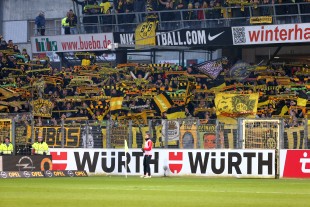 Rumours were spreading that Klopp would get fired or resign if we lose against Freiburg as well. Many journalists and fans were talking about the share that Klopp had in this misery. With these thoughts and words in his head but two teeth less which got pulled out a couple of days before, he went to Freiburg with his team. Großkreutz’s injury led to Piszczek getting back into the back four which was well-known to the audience: the Champions-League final back four Piszczek, Subotic, Hummels and Schmelzer. Sokratis was out on the bench to regenerate. In order to have a bit more attacking power and football skill, Klopp decided to play Gündogan and Sahin along with Kampl, Kagawa, Reus and Aubameyang which would proof as being the correct decision. 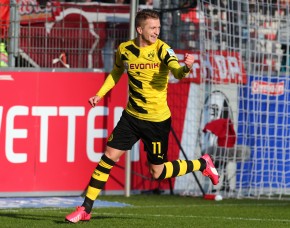 Our BVB started furiously. Everyone witnessed a team that wanted to score from the first second on. Some shots on goal and nine minutes later the away section erupted for the first time: Freiburg tried to escape our brilliant pressing with short passes. One got anticipated by Aubameyang. He left the ball for Reus who just had put it into the net. A typical BVB pressing situation that we’ve known for years but never have seen this season. Surely, that was a lot of help by Freiburg’s Frantz but the way Reus, Kagawa and Aubameyang put him into this trouble was perfectly. In the following 36 minutes it was basically just one direction football. We were the better team and had some more chances to score. Freiburg’s first shot on goal was their best as well, but it was saved by Weidenfeller.

Klopp trusted his team and as there were no injuries, the same players came out from the 15 minute 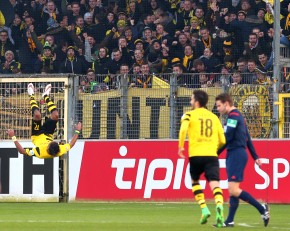 break. Freiburg did a double change to develop more attacking power. Instead they should have focused on their defense better. Not that I’m complaining about this fact, but the space that opened up for our attack was more than welcoming us to score goals. It was Aubameyang’s job to score two more: 11 minutes into the second half, Sahin won ball in midfield, brilliant pass by Gündogan and the Freiburg defence was cut wide open. That combine with Aubameyang’s pace left him one on one with Bürki. Easy job for Auba – 2-0. Freiburg tried to push back but it only lasted for around 10 minutes. Then it was Aubameyang at the end of the food chain again. Kuba, Reus, Kagawa combined through the defense and Aubameyang was free to score again – 3-0 with a front flip. We could have scored even more but a 3-0 still marks the highest victory of this season.

Surely, it is just three points. We’ve had good matches before and then fell into an even deeper hole. Of course, it is still a long way to go and Freiburg wasn’t playing at their full potential. But still, this is an important win for us. We’re not last anymore. We saw some ‘old’ BVB football and we gained confidence again. Hopefully, this will be put into some momentum.