Enough for Mainz, sufficient for Madrid? 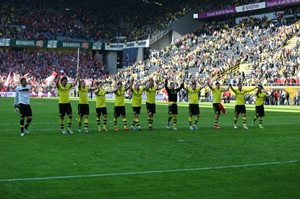 With 2 - 0 goals against Mainz 05, Borussia Dortmund did successfully stand the test before the upcoming Champions League semi-final against Real Madrid. After a more than early lead through Marco Reus, our team continued to play with the handbrake slightly applied and, as a consequence, missed to prematurely extend the lead to have a comfortable afternoon. Coach Jürgen Klopp took the game as a final test before the match on Wednesday, sending the formation on the pitch that will most probably be the starting one against Madrid. After an abundant but not 100 % convincing performance against harmless and personnel weakened Mainzer, one question remains: will this be sufficient against the royals? 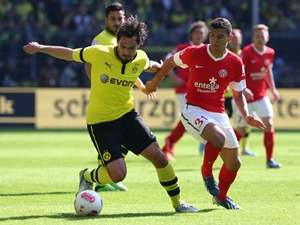 As already stated, coach Klopp used the game against Mainz to let the expected starting formation for Wednesday get some match practice, hoping that no one would receive a serious injury. Surprisingly for quite a few, Felipe - the hero from Malaga - Santana had to remain on the bench. For him, Mats Hummels joined the squad after his long lay-off period. If Mats will also be the first choice on Wednesday or if he should just get some competition practice, remains to be seen. The defence line was completed as usual by Subotic, Schmelzer and Pisczceck. After the injuries of Kehl and Bender, Nuri and Ilkay formed the defensive midfield behind Reus, Götze and Kuba. After scoring eleven goals in a row, it is not necessary to mention that Lewandowski again started as forward.

On the opposite side, Mainz coach Tuchel had to struggle with a decimated player pool. Beside the long-time casualties Bungert, Klasnic, Zabavnik, Ede, Kirchhoff, Choupo-Moting and Heinz Müller, also Ivanschitz and Soto had to pass for yesterday’s match. Stefan Bell therefore played right defender, Yunus Malli joined the Mainzer midfield and youngster Parker was set in as the faster striker option in contrast to Szalai against Hummels and Subotic - good luck boychick. Beside the tense personnel situation, also the current sportive situation draws worry lines in the face of Tuchel. With only one victory out of the last ten games and five points behind the intended Euro League qualification places, there are definitely easier and more grateful tasks than a trip to the incumbent national champion on a beautiful and sunny spring Saturday afternoon. A tough challenge though already on the paper for the boys in red white.

And exactly as the signs did anticipate, the team from Tuchel presented itself in the first couple of minutes. Keeper Wetklo, who was also disturbed by his own defenders, could not clear a long opening ball from Hummels against Götze, the leather landed in front of beneficiary Reus who could finish off in the abandoned goal after 36 seconds played. 1-0, False start for Mainz. Dortmund then continued with dominant ball possession against a nearly paralysed team from Rhineland-Palatinate. Consequently, the scene on the pitch reminded more of a Sunday training unit than of a national cup match for three important points in the race for the international qualification places. Mainz with permanent turnovers, Dortmund with the greatest of ease, coach Tuchel already on the edge of a mental breakdown (10.).

After a corner-kick from Reus the next excellent opportunity for our BVB: Kuba extended the ball into the box, Subotic with a free possibility to finish, but Wetklo could save (15.). After 20 minutes, Roman Weidenfeller had to pause his sunbath for the first time after he had to pick off a cross from Pospech. But exactly as this superiority sounds and the way the match did proceed so far, something started to happen in the minds of our boys. The convenience of the early lead paired with the appearance of a weak Mainzer squad and the semi-final within reach tempted our Borussia to lower the efforts and especially the determination to score. A lot of short passing close to the box without emerging chances... too often have we seen our Borussia loosing important points after a dominant match. As a result, the second chance for Mainz, but Rukavytsya totally missed the goal (23.). Roberts first chance to increase his streak after a one-two with Reus, but his curler missed the right corner of the goalpost closely (26.). The game slowly became better after Mainz started to invest more in the offence. A counter-attack reached Parker in the middle of the box, but with a few steps to far away, he could only watch the ball passing (27.). Lewandowski with his next action in the other box: After freely approaching Wetklo, he fell over the awkward Mainzer keeper. Everyone expected referee Meyer to point at the penalty spot, unfortunately the offside whistle sounded (29.). Pisczcek now with a cross from the right wing to Lewa who could not properly process the header (38.).

Mainz meanwhile deep in their own half and Borussia with a lack of ideas and no proper answers. Especially our 10 Götze was not as feisty and creative as usual yesterday, lets hope he did save his moments for Wednesday. With a deserved lead, both teams went off the pitch for the halftime break. Mainz with no means against a well-structured Dortmunder defense, Borussia however missed to score a due second goal for a solid, safe lead.

Without personnel changes, both teams returned on the pitch. Obviously, coach Tuchel aligned his squad that there is still hope. With new determination, Mainz started the second half. Zimlings shot from the second line missed the bar closely (48.), Dortmund again easygoing... 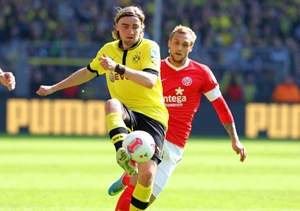 Then, Schmelzer with the possibility to score: Lewandowski served him well on the left side; Schmelzers instant strong shot from the edge of the box missed the far post closely (51.). Sahin with one of several turnovers put Hummels on the hot seat, Mainz however could luckily not benefit (52.). Again Schmelzer and again a golden chance: Long ball, Svensson could clear, but failed to do. Reus reached the ball before Wetklo, the ricochet landed in front of Schmelzer who had the empty goal in front of him but missed it closely (53.). A 2-0 would mean an early final decision... however, Mainz still kept alive. As a consequence, they started to put more pressure on the Dortmunder defensive line. Hummels and Subotic noticeable not as reliable as in their best times, several small blunders could luckily not be exploited by Mainz (57.). Tuchel reacted and sent Szalai as a second striker on the pitch for Risse (57.), on the other side, Kuba made space for Großkreutz (62.).

Best chance in the second half: Reus one-two with Shain who appeared totally free in front of Wetklo but missed the goal clearly (65.). Then, nearly the punishment for our easygoing Borussia: Szalais flat shot from 20-meter distance touched the post... (73.). Schieber as striker for Götze (74.), Lewandowski moved on the 10’ position. 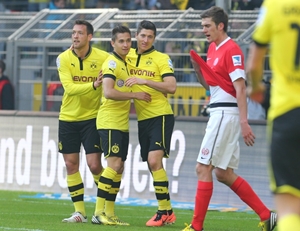 Corner for Borussia: Hummels reached the ball freely with his head; Svensson could barely save for his defeated keeper (76.). Mainz after the substitution of Müller (70.) and Caliguiri (81.) with more investments in the offensive. A small pressure phase resulted in two corners that both did not bring a return (83.). With Marco Reus, the best player left the pitch. For him, Leitner came into play (86.).

Finally the decision: Leitner on the right wing to Piszczek who saw and passed to his compatriot Lewandowski in the middle of the box. Robert then with the free possibility to finish off for his 23rd season goal and 12th goal in a row (87.). Mainz now officially surrendered. Two minutes of additional time went by without any meaning.

That was a near miss. In the end, Dortmund did win 2-0 in a superior, but definitely not convincing match. After the early lead and the weak impression that Mainz did leave within the first couple of minutes, evidently the upcoming semi-final did more and more occupy the minds of our young players. But who could ever blame them for that? Real Madrid does play a dominant role in all of our heads these days and the most important matches since a decade of a black and yellow period of suffering on an international level lie right in front of us. Yesterday, Dortmund did not really want to and Mainz simply couldn’t and that’s how the match is best summarised. However, there are more impressing ways to beat an opponent that presents itself in such a bad shape. With a little bit more determination and will, we could have sent a clear message to Spain. 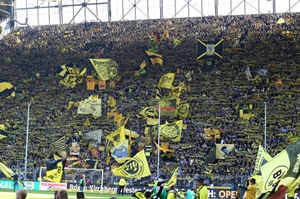 Now, the squad of Mourinho will come in the black and yellow hell without any forewarning. The pitch will be burning, the stadium will be on fire the temperature is already rising - 72h 00min 00sec left until eruption. Heja BVB.